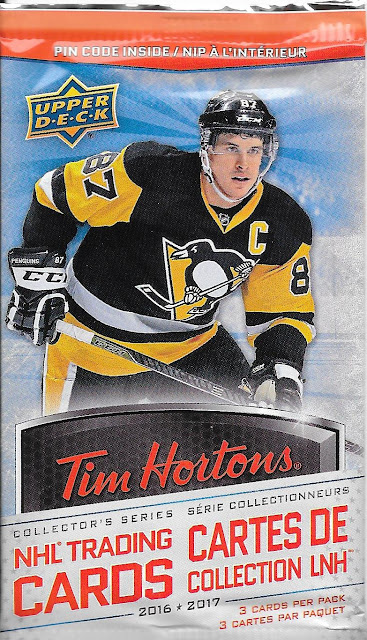 Having received about a dozen of these at Christmas, I figured it was about time to start opening some of them. Since there is only 3 cards per pack we will end up doing 2-3 per posting. This may move me far enough along to look at completing the set. I typically stay away from these when they first come out because of the hype around them and crazy prices that they start at and quick sellouts at the stores.

Anyway, let's take a look at two packs for today...

Wow! That is an awesome pack given the two solid base cards - personally the best two outside of Tim Horton or a Leaf (maybe McDavid as well, just based on timing being early in his career) that I could get, and the Local Leader card - one every four packs - was the only one I was missing from the subset (I had picked up 6 of these cards before). I'm not sure any of the other packs will be able to live up to this one - two great base cards and completion of a subset.

Obviously a bit of a down after the first pack. A dupe Local Leader, and a couple alright base cards. Well, if I end up going for all the base cards, and a set, these are as good as any I guess.

Not a bad two packs to start...let's open some more later!
Posted by CrazieJoe at 8:00 AM