I always like to have the opportunity to highlight trades, especially with new trade partners, and that's exactly what we have today. I just haven't had the chance to post it, but have had the cards waiting to share for a few weeks. TCDB member Goal Line is from Minnesota, so a nice quick cross border PWE is an easy way to go.

So in exchange for some baseball and football cards I don't need to keep I got... 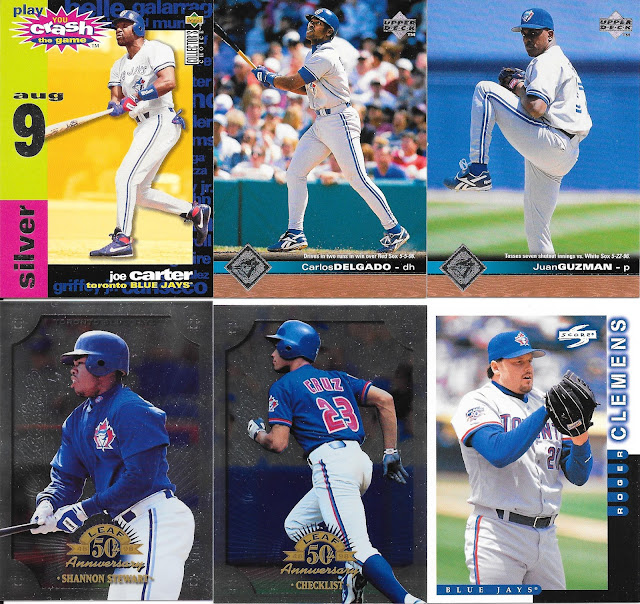 Roger Clemens in a Blue Jays uniform still looks very wrong, just like Juan Guzman after he cut the longer hair.
These are the first 1998 Donruss Collection Leaf cards I have, and to be honest, I thought there was something wrong with the Checklist because the back seemed blank where a checklist should be, but it's exactly what every card on COMC shows, so must be just how the card is. Either way, I will say these cards, because of the "chrome" curve something fierce! 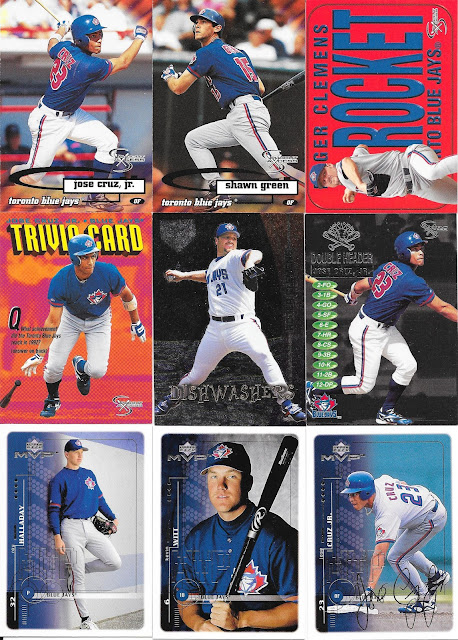 The rest of the PWE trade includes a few excellent cards - heck I even like the uniqueness of the Clemens license plate look.

The Dishwasher and Double Header cards are both lone Jay inserts from 1998 Skybox Dugout Axcess - a set I hadn't even heard of before this trade. Honestly, late 90s and early 2000s baseball cards are still brimming with sets I probably haven't heard of, let along insert sets.

The trade ends with three Upper Deck MVP cards from 1999 which include two to complete the base card team set for me, which is always a good thing!

Nice to have those reach me to the Goal Line!