So beofre your regularly scheduled content below - I was at my mom's for Thanksgiving yesterday and had a surprise waiting. My sister's friend...something something....had a bunch of cards they wanted rid of, and she suggested me, so they were at my mom's for me to take home.

The good - there was probably 18,000 baseball cards all in
The bad - I think they all fall between 1986 Topps and 1993 Donruss
The good - I should be able to fill a lot of the holes and finish a lot of the basic sets from these junk years
The bad - they were kept in an attic and I will need to cull down a bunch on the cards to get rid of damaged cards
The good - On first go through, there were still about 10,000 cards in decent condition, which hopefully will hold up when I look again, though I expect I may get down to about 5,000 cards worth keeping based on condition
The bad - Upper Deck cards from the early 90s - I got rid of many because they must have been wet at some time, and the front and back pieces were simply falling away from each other.

I'm not sure how to approach these yet, but first I need to pick up some new boxes and clean through them. Given the content, I may got through them in detail, but will keep you guys posted on what I do end up with out of it.

I think this will be a fairly fun box. I was surprised on look to see that I actually have about a third of this set, but given it is 800 cards (700 in the low numbered set, which is what I have a box of here), should still be plenty of new cards to get since a box of 36 packs with 15 cards per means 540 cards to go through.

The low numbered series is done around Ted Williams from the box bottoms to autograph insert (hand numbered to 2500) and heroes cards.

The high number focused on Johnny Bench and Joe Morgan and had more inserts, but even the base set is one with a couple different insert options which hopefully we can highlight as we go through the packs.

I am not going to say this is the first set with multiple inserts and insert sets, but I think 92 or 93 is the real start of getting multiple options on inserts which then added parallels to sets, etc. Not saying it was the beginning of the end of simple sets, and not that it is a bad thing, just timing seems to be about when the changes happened, or at least that I noticed.

Again, since there are so many cards per pack, I will just run through the highlights of each stack each day. Also, won't need to keep an unopened pack as I already have one from the low series.

So, let's look at inserts first... 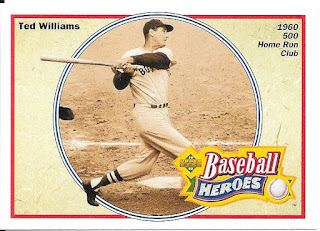 There are not a ton of these cards in this release - maybe 9 cards and unfortunately I already had this one, but it is still very nice. Upper Deck did these Baseball Heroes sets well.

These actually didn't scan that badly for being holograms. I didn't know there was a gold version (these) and a "normal" or silver/grey version as well. These are pretty nice, and I like the full card size versus the smaller size used in past years. 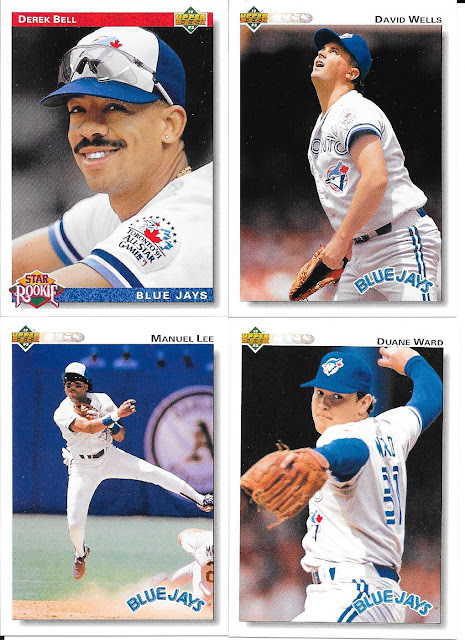 Of course there were some Jays which I need to share as well - though I had all these.

As for the needs covered in the base set, some quick sample of those... 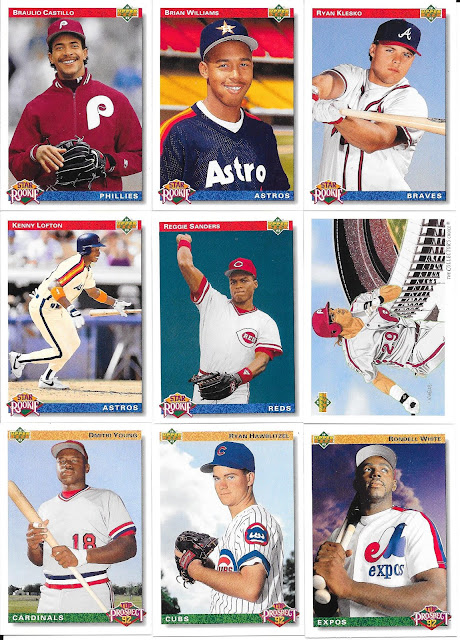 Though I would highlight a couple subsets with the Star Rookie and Prospect cards. Really like the Rondell White card - definitely had a good career - prospect indeed. Was able to get to about 43% done - so a nice bump that can hopefully continue tomorrow.