An update today first on the Thanksgiving cards I got - today we will talk 1990 Topps. Unfortunately a bunch of the cards (maybe half) had serious bending, a few wet warped, and as much as I don't mind a bit of dinging on cards, the big bends are problematic because putting the set in order and in a box, these can bend the cards that are alright, so I was a bit pickier about it. Going in, I had about 220 of the almost 800 card set and as usual, I look for keepers for the set, Jays, and error cards, so let's see how this turned out for what was about 1,000 cards (including the benders)....

First, my set completion went from about 220 cards to almost 670, so I will put this set on my radar for completion since it is at about 85%. 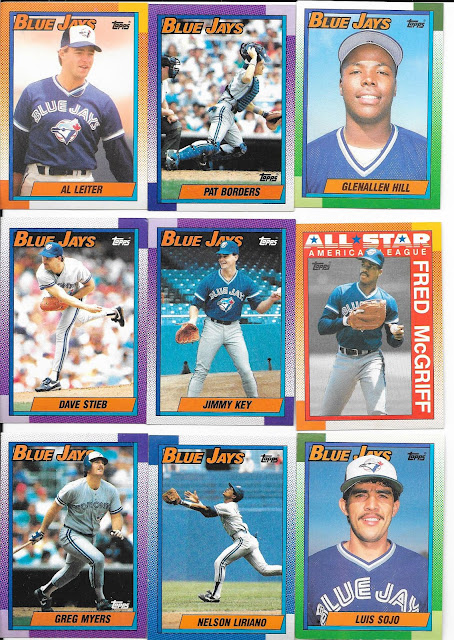 These are not all the Jays - somewent into the full set now. Also, as you can tell by the off scanning, they were a little bendy, so not lying nicely on the scanner. 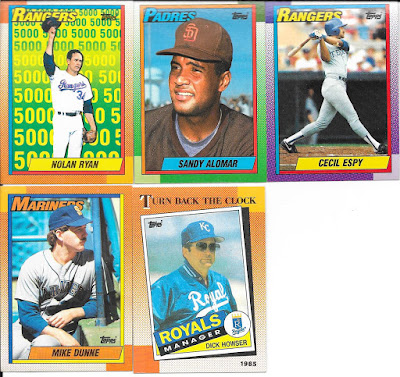 Really like the Turn Back the Clock cards, though the 90s design doesn't do it justice on this one.

Decent overall, even if a bunch went to the sale box - not good enough for my collecting quality, but good enough to sell and not trash.

Anyway, this should be a fun box. I have about 10% of the large 650 card base set. I picked this up at Walmart for less than $30 as I thought it would be a fun break, and it is a set I know won't have anything in the Santa Lot which seems to go to about 2011-2012. With 36 packs at 12 cards each, factor in the inserts and parallels, should be able to add about 350 cards to the base set, assuming I don't double up on much with what I have already.

With 12 cards a pack, not going to show these by packs, but take an overall look at each quadrant. If nothing else, I should come away with 36 gold parallels which come one per pack, or so say the odds. With a retail box there is also one signature card, so we should be seeing that also. 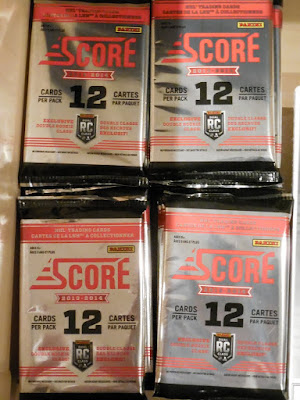 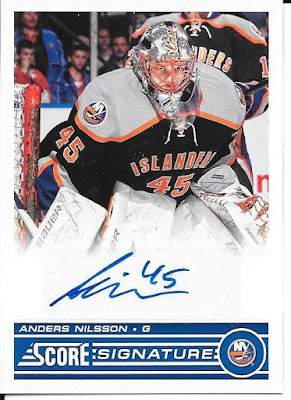 Anders has played with four teams in his NHL career which started in the 2011-12 season - not having a significant stretch with any one of the teams. I like how the card keeps the base design in large part, and though it is a sticker auto, the design works for it. 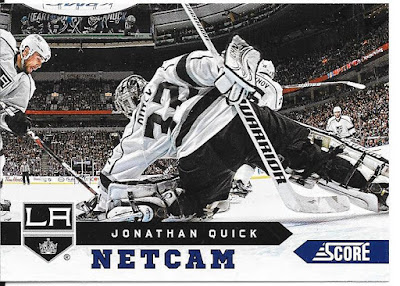 I like these netcam inserts likely because you get yet another type of unique photo with regards to goalies. It also doesn't hurt that this shot specifically provides a great view of the rink in the background. 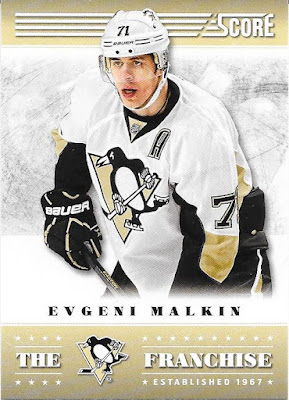 I will say, I like Malkin playing with Crosby and don't want that to change. That said, if he stays for his career with Pittsburgh alongside Crosby, it will have a huge impact on how his career is viewed. Some will say he played well above his abilities, made better by Crosby's presence, others will argue that he never gets a shining position, always overshadowed by Crosby.

I think they work well together, and though it may be hard to "play in the shadow", Malkin is a great player in his own regard and compliments Crosby's play well. 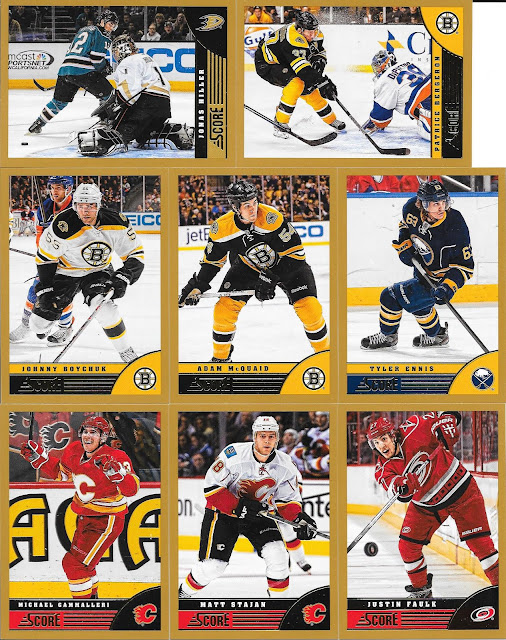 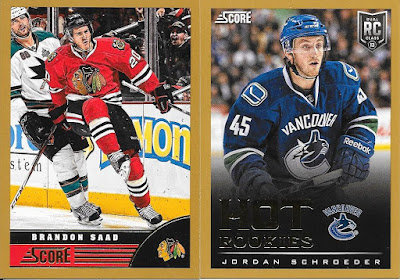 Interesting that these are supposed to fall one per pack and I got 10 out of the 9. I believe this is because of the Hot Prospect card - inserts as a Hot Prospect which I believe is one every two packs, and not being counted in the gold parallel dropping of one a pack. These remind me of 2000 Topps baseball a bit too much. 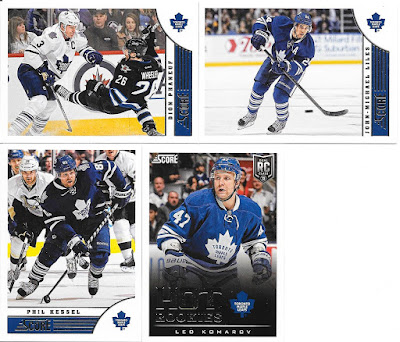 Leaf content! I mentioned having about 10% of the set, I pretty much have the Leafs covered (may be missing one). I am hoping maybe picking up one or two gold parallel Leafs (don't have any) will happen in this box, but no luck here. 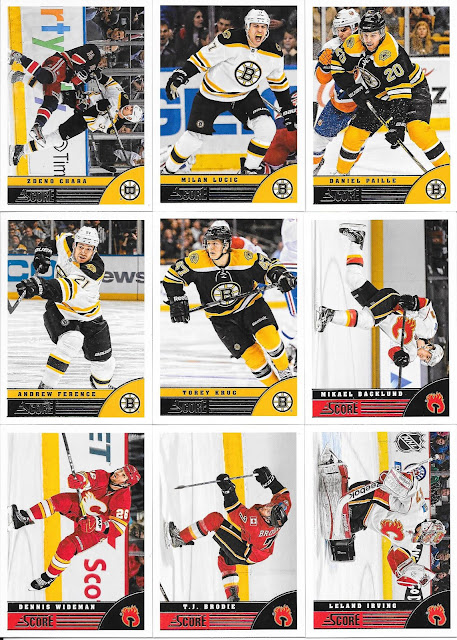 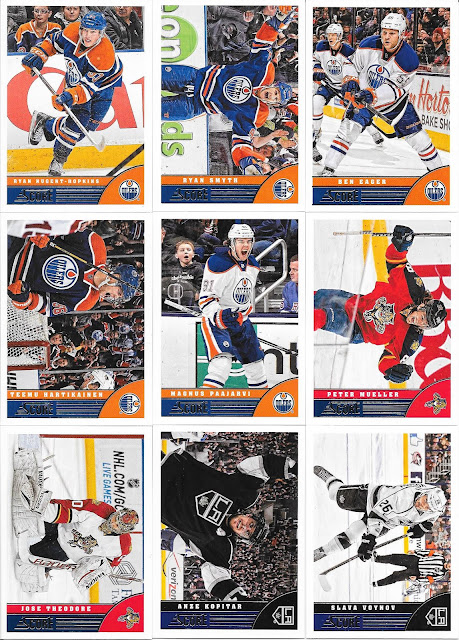 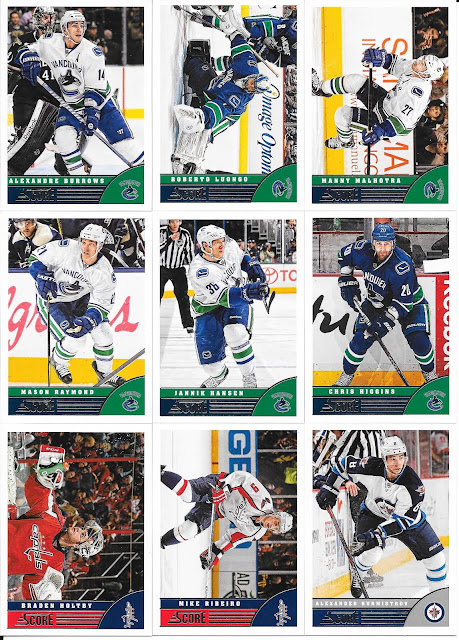 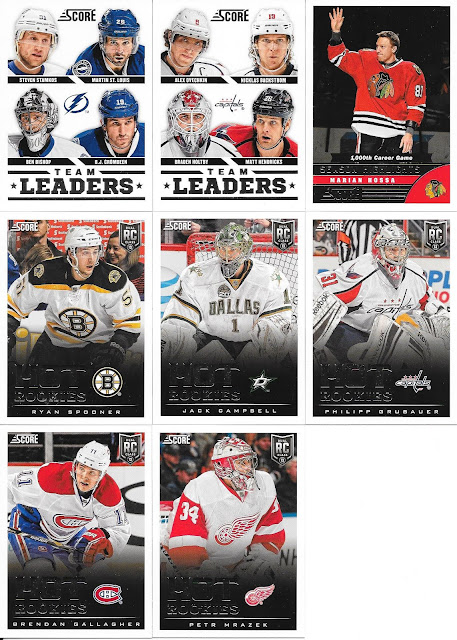 A portion of the base cards I needed. You can see the collation even just from this one stack of packs. I really like the Team Leaders cards with the four quadrant set up, a great way to highlight the stars of the team. Curious to get more of the Season Highlight subset - the design being very much like the base is fine with me. Lastly, the Hot Prospects - meh, the "Hot Prospects" could have been made smaller to give more room for the picture.

Well, this will be hard to top given the auto, but we shall see what we get tomorrow.
Posted by CrazieJoe at 8:00 AM