First, as everyone is aware, Stan Lee passed away yesterday. I was never big into comics myself for whatever reason, but his influence cannot be overstated. Then add in the more recent box office influence that his creations have had, and it has been an amazing life for the man. Though he may be gone, the creations he built will live on for a long time to come.

As for cards...it's always nice to be able to complete a trade, but being able to do two in a single day is even better. Being able to do so as the result of a single PWE trade - doesn't get much better than that.

I don't usually go out of my way to initiate trades, but found one person with the cards I need to complete two sets and asked if he would be willing to trade as I wasn't sure given the distance, but he agreed.

So this is also my first trade with someone in Norway, but well worth it and went off perfectly (yes, slightly longer getting the cards due to the air mail asked). So a big thank you to Steffanos44 for being open to the trade, and coming through in completing these sets... 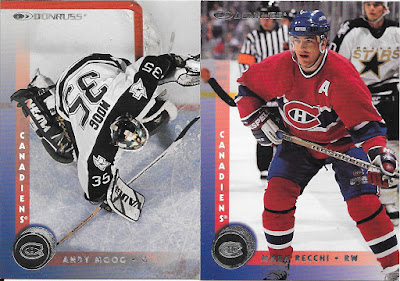 Wasn't on purpose that the last two cards of 1997-98 Donruss that I needed were Canadiens, but that is how it worked out. This does complete the 230 card base set (yay!).

I'd call that a successful day.
Posted by CrazieJoe at 8:00 AM