I debated whether I wanted to do this or not. What I am opening today is something I have held onto as is for about 2 years. I bought 6-7 of these from Dave & Adam's Card World on a trip to the US in 2014 or so, along with a few other items.

I opened those before I started this blog, otherwise I would have shared them there. I enjoyed them so much, I held onto one as is for a later time, and to have as is on by shelf.

Well, given how much my collection has grown - big thanks to all the readers here and people I met through TCDB since being back in the hobby - I need the space on my shelf to show other things, and it is really a collection of unopened packs, not boxes which I am working on, so today I share with you a fun treat.... 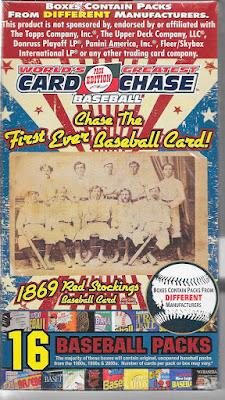 I didn't luck out with getting one of the packs related to the big win, and at this point, it would stay unopened since the "competition" is long over, but would be a really awesome pack to include in my unopened pack collection.

Besides that, just fun getting a bunch of old packs, and the memory of doing so in the others is why I held on to this one for so long.

Well, without further ado, let's take a look at what the 16 packs are that come in this specific box... 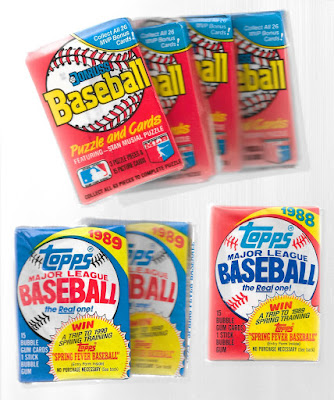 Well, seven packs I won't be keeping. Actually, truth be told, the 1988 Topps is an upgrade, so I will open the one I had been keeping aside instead, later. 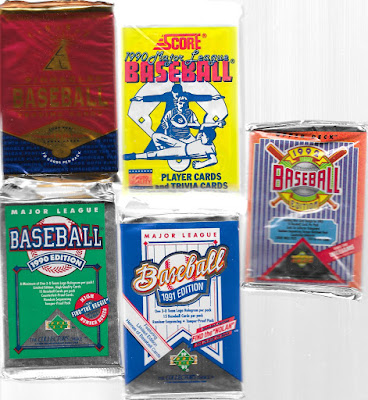 Wow - 1997 Pinnacle - that's a keeper. The 1990 Score is actually also a keeper - different ad on the back than the one I already had. This one is for a baseball card collecting video...huh.... 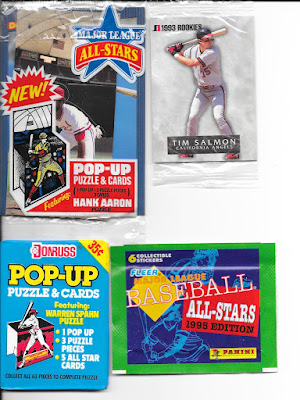 I have 3 Jimmy Dean cards unopened from one pack I got in these, a second unopened pack in my collection, and this one. I am going to open this one too, but for the 9 card set, I think I have it if you include the one unopened pack....but I'd rather keep the unopened pack.

Stickers, I don't bother keeping, so the rest are for opening later. 16 packs and only two keepers. Not ideal, but hey, can't win them all, and I liked opening this one anyway - love these boxes and having fun as well as love for collecting is what it's all about!
Posted by CrazieJoe at 8:00 AM