Today we move on from the bunch of 2012-13 Score packs to a few 2009-10 Upper Deck ones (series 2 to be exact). This is another set which has been on my radar to collect, so although I have not been actively working on it, these packs give me a chance to pick up a few more base card needs and maybe see something else interesting with regards to inserts. Going in, only have about 13% of the base set, so plenty of room to add. Well, let's see what we have here in the first pack...

I have to say, this is a really nice looking base set with the lack of a border, and not a lot of space taken up by the name and logo (small complaint is them being foil, so a little harder to read).

Three new base adds - a bit lower than I would have expected, but did get a couple other adds... 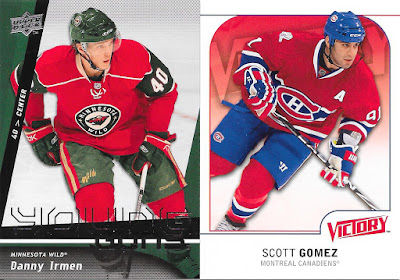 Danny only made it to 2 NHL games, but enough to be a Young Gun here (which show up every 4 packs). Gomez was a decent enough add for the insert (one per pack) Victory Update set.

One of those years the Update set was an insert set - hate when products switch between having their own release to becoming inserts or vice versa.

A few dupes from the pack...may be less of those tomorrow, fingers crossed.

We will end with another baseballcardstoreca TCDB member and those at the great www.baseballcardstore.ca website that sent along another 14 cards for the Toronto Jays/Leaf collection. 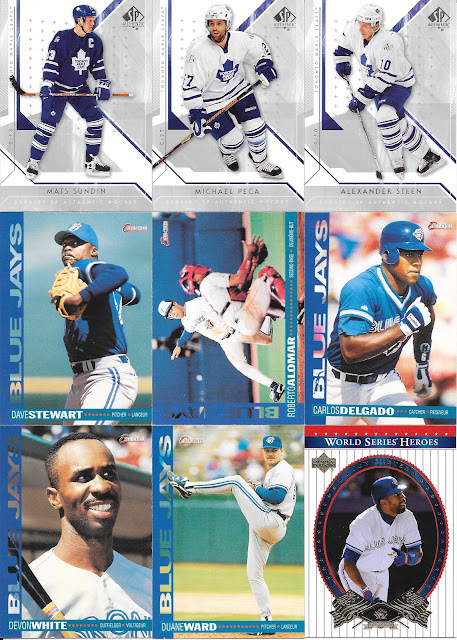 The three 2006-07 SP Authentic cards are the rest of the non-SN base card Leafs I need for the team set, while the 1994 O Pee Chee Jays make a dent into that team set. I am not a fan of the O Pee Chee logo used on those cards, but at least it is fairly small.

The last card, and next couple are all the first cards from another new to me set. 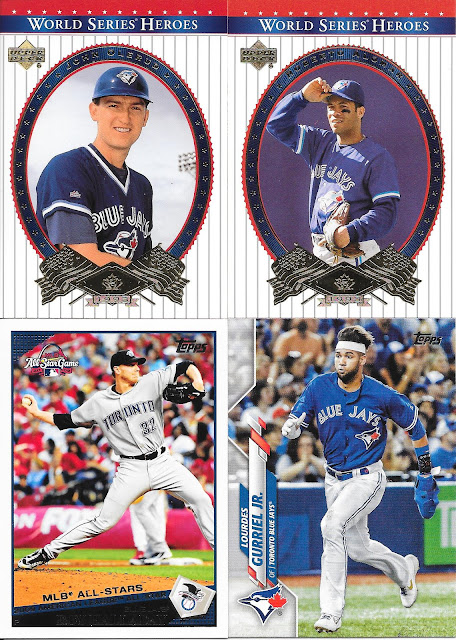 That World Series Heroes set out of 2002 is a decent enough topic, but lots of border on the front.

We also get my very first 2020 Topps card! Yeah, apparently 2020 cards have been out for a bit now, and as per usual, I knew about it, but run well behind everyone else so, poof, first one, right here. 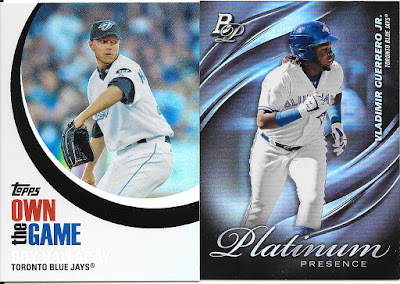 Two different one card team sets out of inserts. The Own The Game design was used in basketball too, so I have seen the design, but it is the first baseball card of it I have, and the only Jay - Halladay.

Oh, and yeah, another Vladdy Jr card for the collection and this one a very fine looking Bowman Platinum insert. The Jays blue shimmer is very nice in hand.

Great new cards fr the collection as is the usual and as is appreciated!
Posted by CrazieJoe at 8:00 AM