Bringing me down and back up

2013 Triple Play isn't the most exciting product, but the box thus far has been alright - some base needs knocked off, a couple Jays cards, a couple new inserts. Well, that changes today. 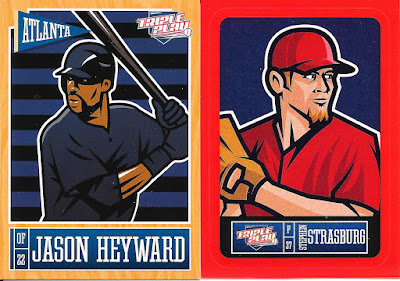 Those are all the keepers for me - a single base, and a single insert - that's it. 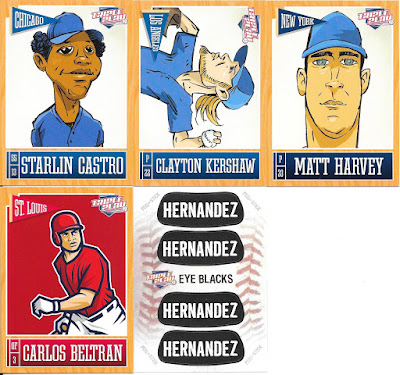 This pack looks quite similar to one just the other day. Bound to happen I guess given the number of cards in the box, and the number in the base set. 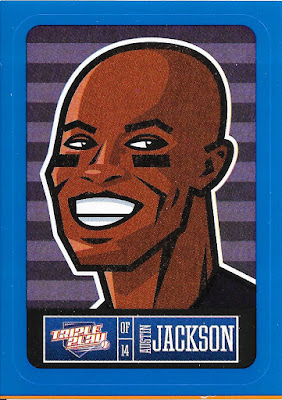 Sparse on the second pack as well for keepers. 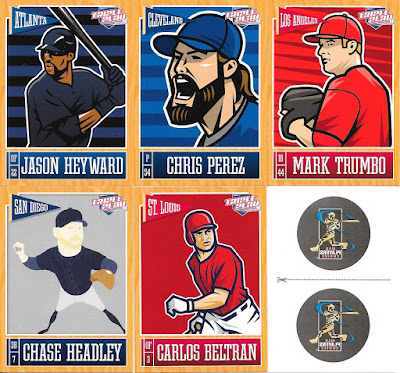 Another bunch of dupes. Yeah, I don't these packs really did much for me.

Let's go through another bunch of new to me Magic cards from my December purchase - a better way to end today than Triple Play. 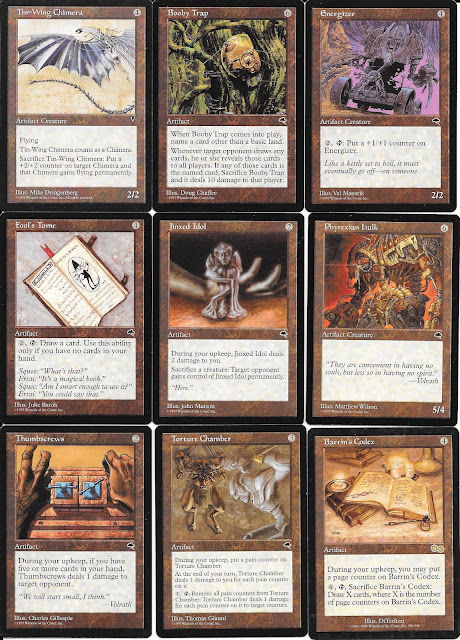 These are starting around the edge of time that I stepped away from Magic, the late 90s. Tempest (the storm cloud symbol) was a set that came out while I was still playing, but I wasn't buying much anymore. 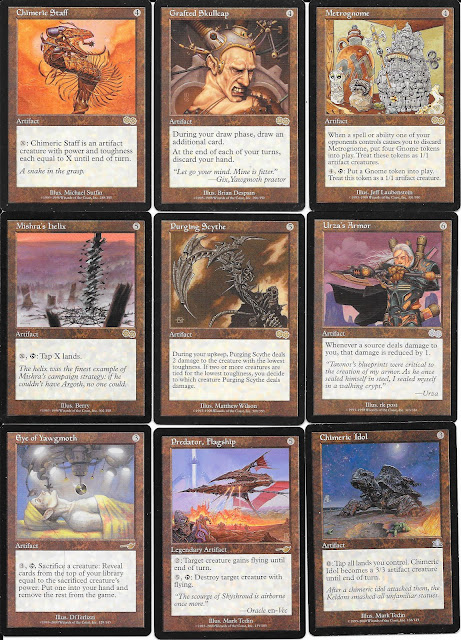 Same can be said for Urza'a Sage (the gears), right through Prophecy (the Chimeric Idol at the end). Actually, Prophecy would be about when I stopped playing, so my artifact collection there was sparse, but I have been filling it in. 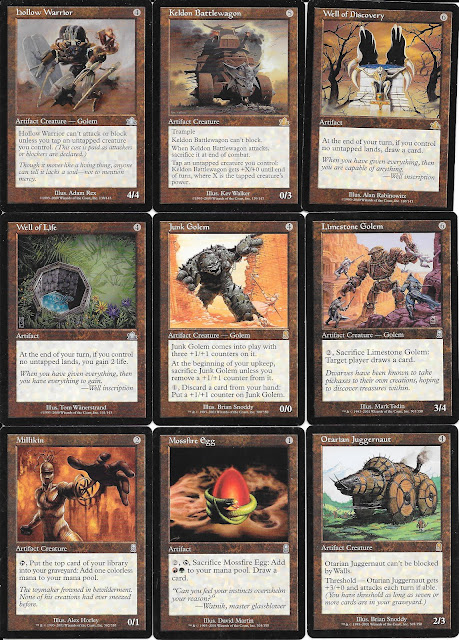 As it turns out, Prophecy only has 6 artifacts to the set, and I had one, so with the 5 here, it's another set I have completed the artifacts for. That makes three sets all in which is pretty cool. Usually there is atleast one higher priced artifact card in a set that will make it too expensive for me to get a complete set like that.

I don't want to gloss over the nice artwork either - a couple good examples here - I love the perspective on the Well, and the Juggernaut is a great looking contraption. 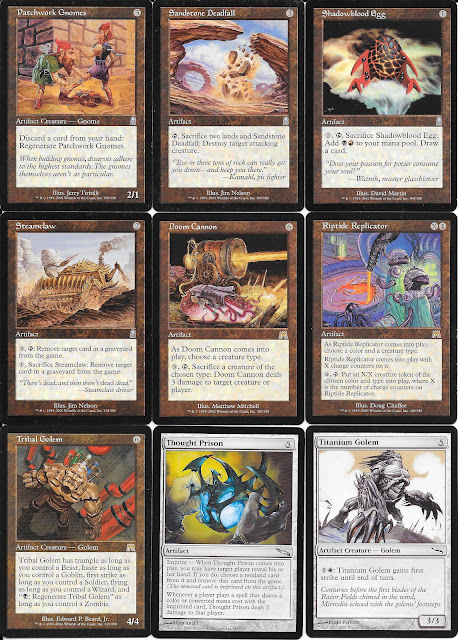 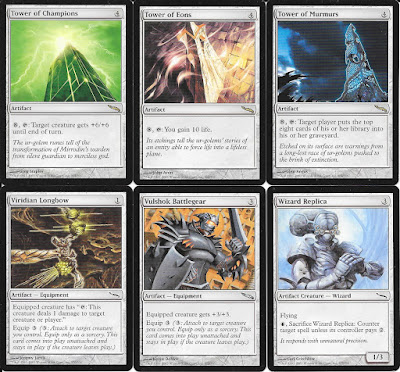 We end getting into some more Mirrodin set artifacts. As I say, with over 100 in the set, there are plenty to choose from, and many are at low prices like 15-25 cents each, so manageable.

Still one more batch of cards aside to go through, but maybe in a couple more days to help ease the Triple Play pain.

Actually, one more item to bring me up a little bit more. I got a quick PWE from baseballcardstoreca with another 14 new to me Toronto cards... 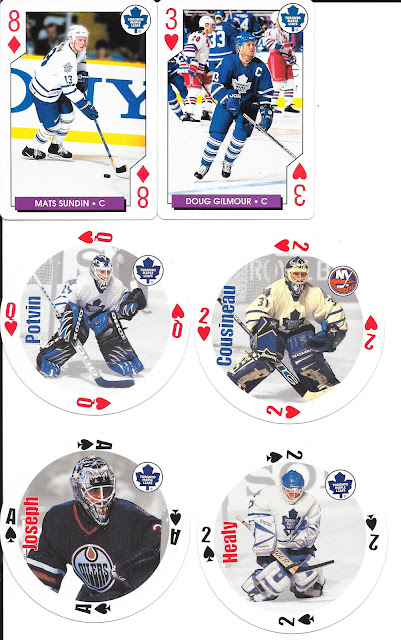 Now, I don't know who ever played with round playing cards, but they make great looking cards when you throw a goalie on them. A great variety between the 4 here and Cujo in his Oiler uniform too.The set stands out from the first playing card set shown above. The first is from 1996-97, the round from 1998-99. 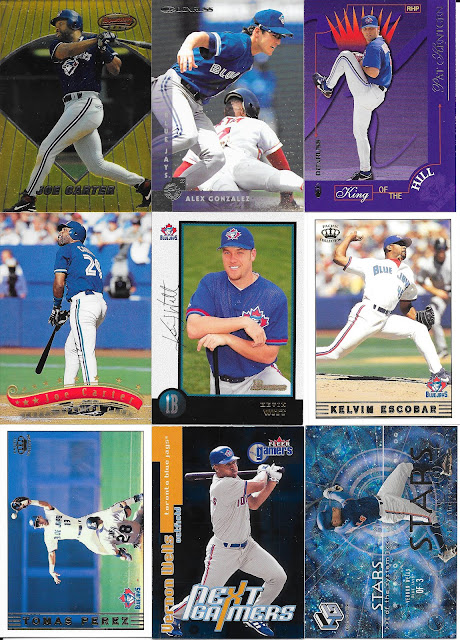 For the Jays cards, we sit squarely in the latter part of the 90s here as well. Always happy to see more Joe Carter cards I don't have, and really like the look on the Stadium Club card, just watching the hit (let's assume home run).

Pacific cards here with Perez and Escobar are a decent enough design and the first from that set for me too.

The Vernon Wells Holo card is, not surprisingly, amazing in hand with a great little effect to it. Also happens to be a one card Toronto insert set, so that's really nice too.

Another great little package, and much appreciated!
Posted by CrazieJoe at 8:00 AM