Another day, another couple packs of 2013 Triple Play today, so let's just get to it! 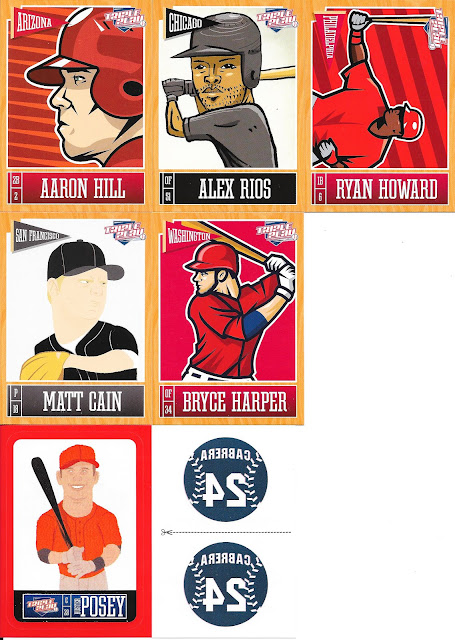 Yeah - the entire pack is dupes. Every single one. I mean, great cards with the Bryce as I might get two cents back for that bad boy, but...sigh.... Thank goodness, a Jay. This at least makes up for the dupes pack...well, a little at least. Still would be a much better card if it wasn't that dead-on look. Oh, and it is still a dupe, but a Jay dupe is still just fine. 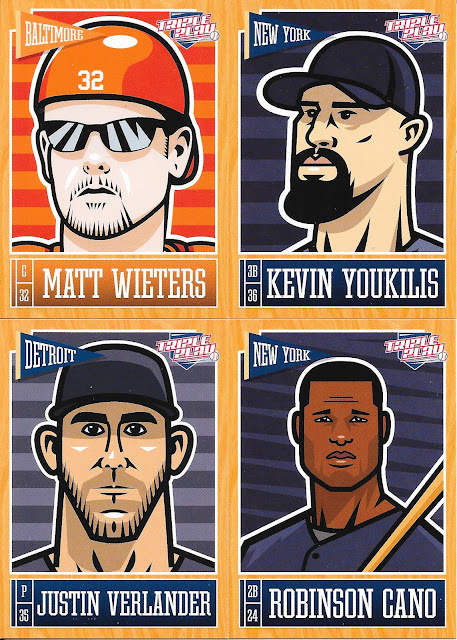 Even better (almost) is four more base card adds - think I am down to about 10 and the short prints. Matt looks familiar because it was the same card as the blue sticker one yesterday. 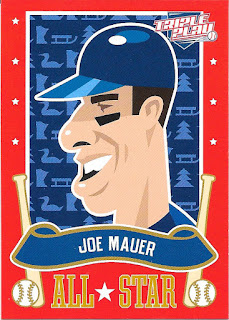 All Star Joe to and to the co-llection. 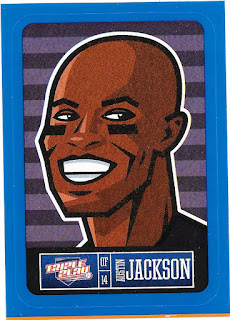 Wonder if the orange at the bottom is from a miscut as the blue stickers seem to have it. I gather it is the tradition stickers which must be on the sheets below, but can we call this a miscut?

With the horror show out of the way today, a nice surprise package from Sportscards From The Dollar Store. I received an e-mail just asking confirmation of my address to send some cards my way, and it was more than I thought I'd see (I was figuring maybe a PWE with a few cards). 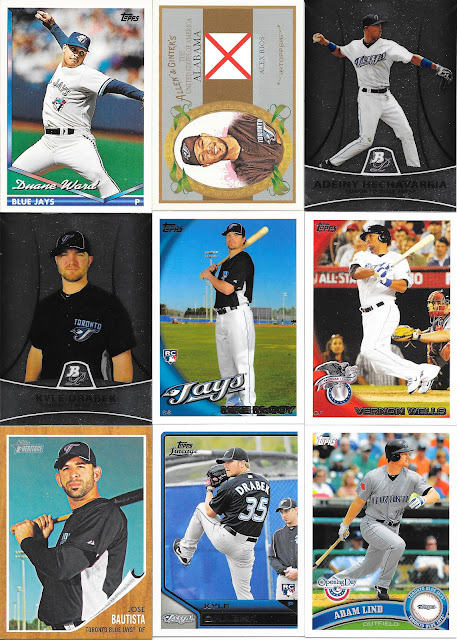 We start with some surprise baseball cards as I figured it would be fully Leaf related. The Bowman Platinum cards look nice for what they are - I am a sucked for the metallic look. Not so keen on the A%G insert per se, but more because it doesn't speak to me with the State specific topics, but I get it works for many.

As an aside - I think I went from having none of the Vernon Wells all-star card shown mid right, and now have three in the last few weeks - sweet! 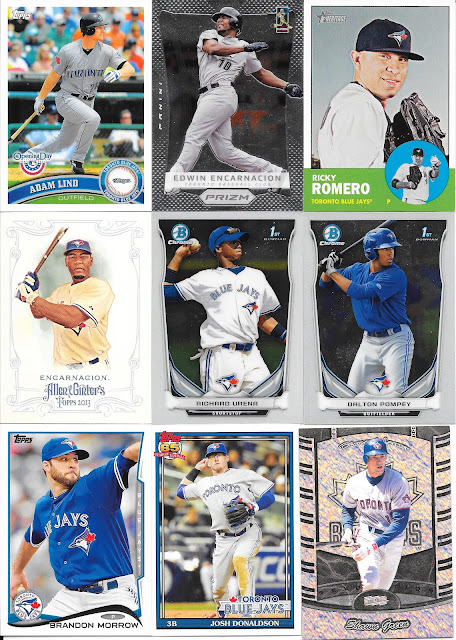 We complete the Jays content with a glimpse of the "classic" 1991 Topps design on the 2016 Archives Josh card. We also end with a shiny Shawn Green Diamond Legacy insert card which is a full team set of one for the insert. 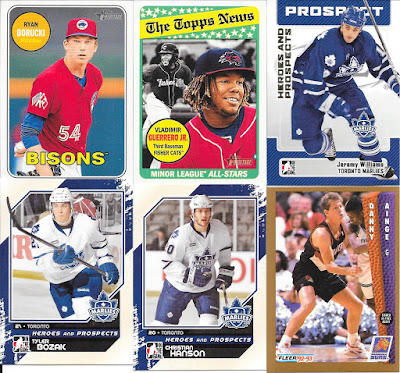 Also provided were these - which all have homes in my mind except for Ainge....totally not sure why Ainge is here....hmmmm.....

The minor league Jays will be on there way to another baseball card blog and the minor league Leafs will have a home out there as well - so still great to get them as I like being able to pass around the fun. 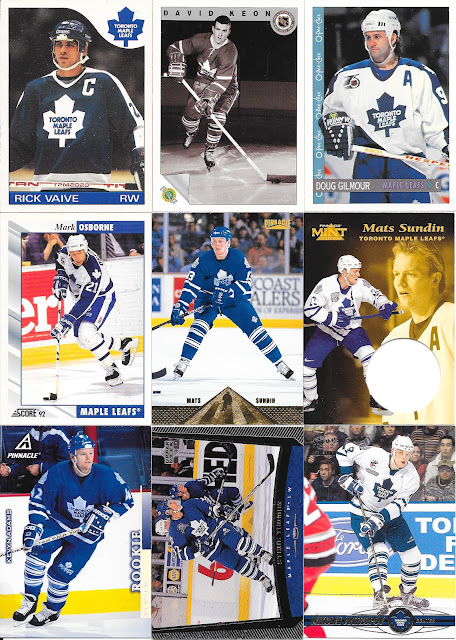 We then move into the hockey cards and a lone amazing 1985-86 O Pee Chee Leaf card of Rick Vaive - classic! We skip quickly through the 90s, including the Pinnacle Mint Sundin which still looks so odd in the cut out version missing the coin. 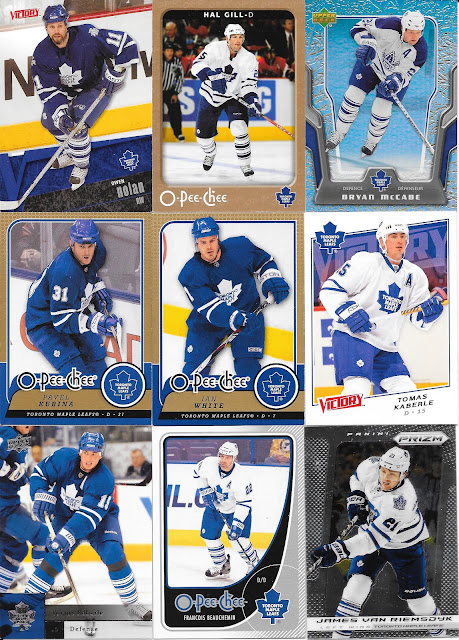 It's been a while since seeing some of these Leafs. The Santa Lot brought a lot of 2006-2008 cards including the Victory, O Pee Chee and McD cards, but I do really like them all anyway and enjoy the dupes. 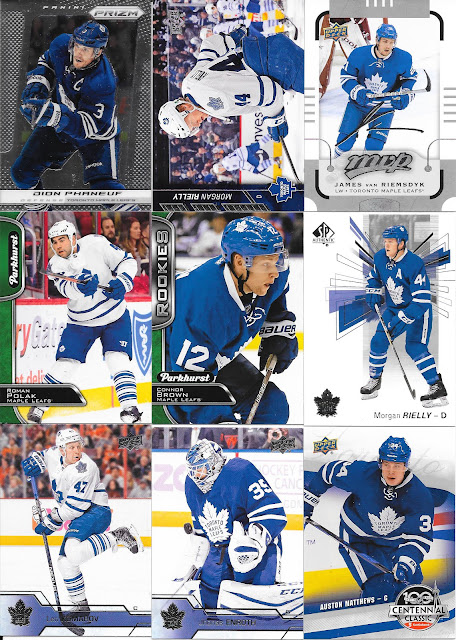 We move into Leafs of the last few years which I am missing many of. The silver script MVP is nice, and Morgan here is the first SP Authentic out of 2016-17 in my collection. 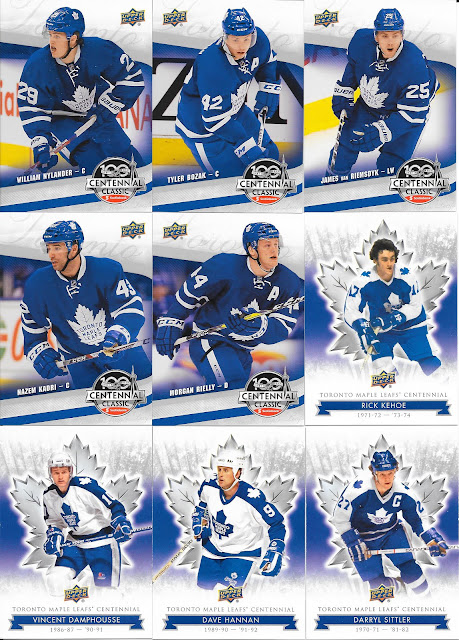 Although I do have a complete pure base set of the 2017 Centennial Leafs, the 6 cards of the 7 in the 100th Centennial Classic are all new to me (and very nicely done). 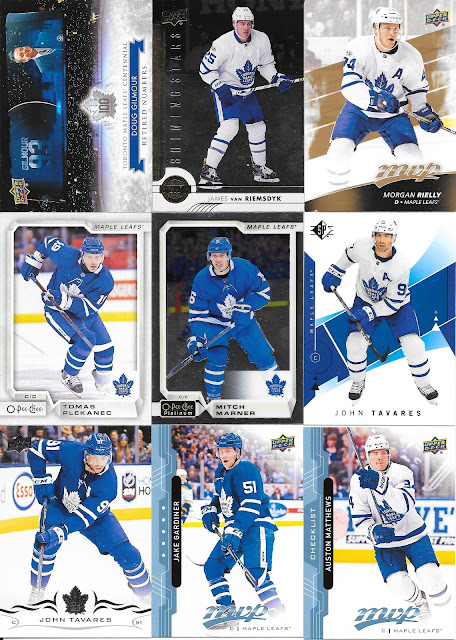 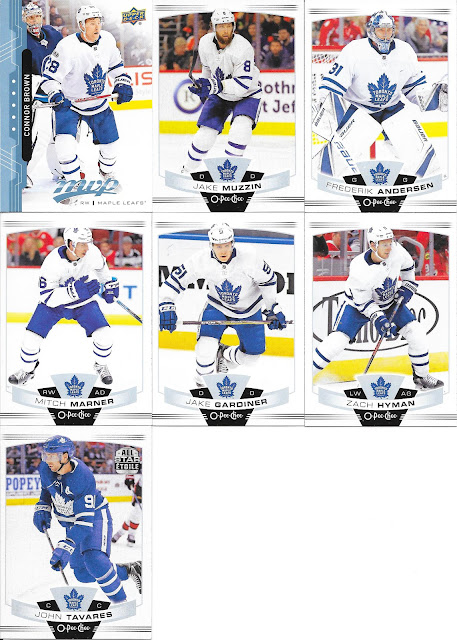 We end with 2019-20 O Pee Chee cards which are all new for me. A typical, but solid O Pee Chee design - nothing too far in concept from recent designs. Not amazing, but right what I would expect from the brand.

The MVP cards are the box set variety, so I expect they were picked up similar to how I got the ones I already have - repacks from the dollar store....quite fitting.

I have a return package or two headed back out. I went the route of trying to send a bunch of cards with a theme that Doug collects, so hopefully some of them are hits and get into his collection.
Posted by CrazieJoe at 8:00 AM