Before getting to cards, it's sad to have lost Blue Jays great, Tony Fernandez who passed away at age 57. He was a big part of the Jays becoming a team that wanted to do more than just play.

A leader in many all time Jays categories as he spent the majority of his career in Toronto, over 4 different stints, he may be best known for being part of the biggest trade in Jays history which saw Roberto Alomar and Joe Carter come to the Jays.

A member of the Jays level of excellence and a Canadian baseball hall of fame, he will be missed.

You know when you open a couple packs of the same product and end up with similar cards - sucks. Well, a bit of that today. The base cards were alright, some keepers and some needs, but the gold rush insert of one every pack...

Yeah - back to back packs. Since one per pack, I can quickly call those odds of being a 1 in 548 chance of getting the same one as the prior pack. I should run off now and pay the lottery. Too bad the rookie card is also a dupe.

Here are the keepers... 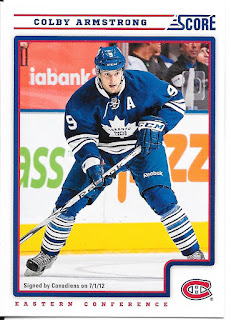 Colby gets to be included in the Toronto collection and binder as I count both Leaf uniforms on cards, and Leaf team association where not pictured in the Leaf uniform (this way I have a wider net to catch all Toronto affiliated players).