Let's work in reverse from yesterday in going through the Jays, first up, the team set completers... 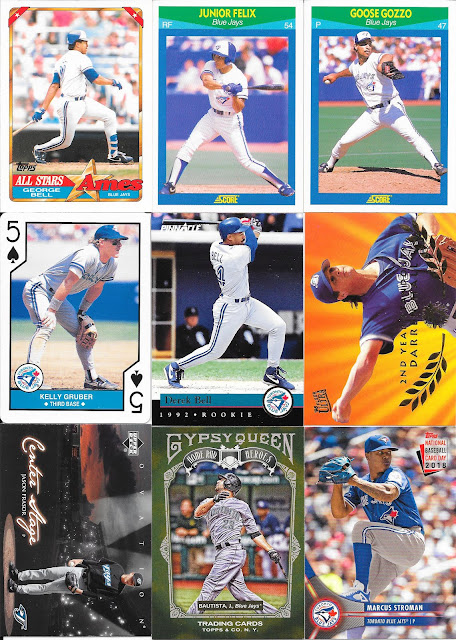 Sure, some of them are single card team sets, like the bottom row, but it still works for me. I really like the Stroman National Card Day front - great colour matching for the team with the design, and not overbearing.

The Gypsy Queen green is a little over the top and detracting - would work well for the A's.

As for the rest of the Jays... 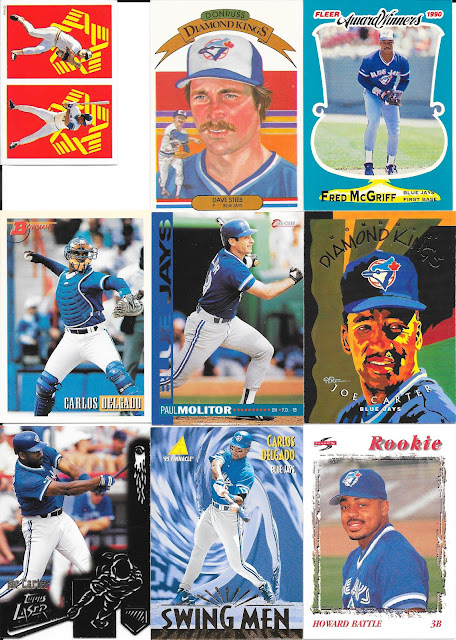 The sticker is from the 1988 Panini Stickers, which was the first sticker set I really collected, and many, I got a lot of them. I don't know where they went over the years, but they all left my possession at some point and now, back to re-collecting them.

Some big swatter love here too with Delgado and Carter. The Topps Laser is an interesting die cut design with the bottom, and even the baseball up the top right being cut out parts. Definitely different.

The Swing Man swirl is a little unsettling (see nauseating) and the Diamond King Joe is a bit off in the colouring, but not my thing...but still a Diamond King. 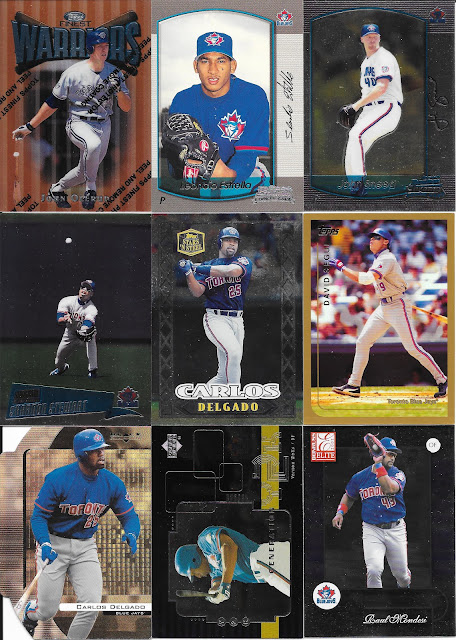 Speaking of Delgado, not only do we get more of him here, that centre card is the first metal card I actually have. Okay, not 100% sure as I haven;t looked it up, but the material definitely feels like it is metal. Very different, and very cool. 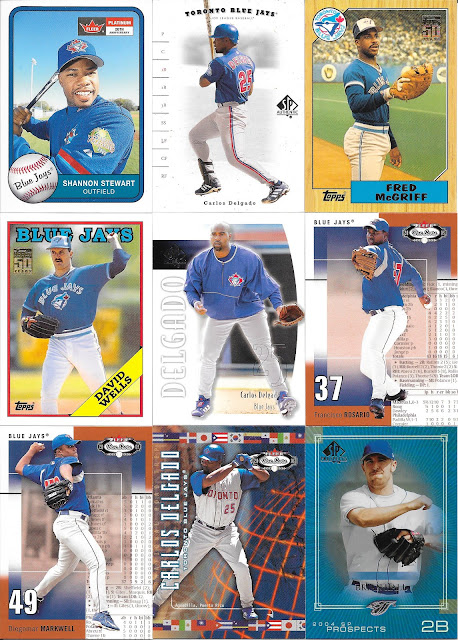 More Delgado - and an SP Authentic design that they could use for all Blue Jays cards forever - maybe jst a small change to the blue tint, and it would be perfect.

Not too long ago I got the Wells 50 card (mid-left), so I at least knew what I was getting here with it and the McGriff. 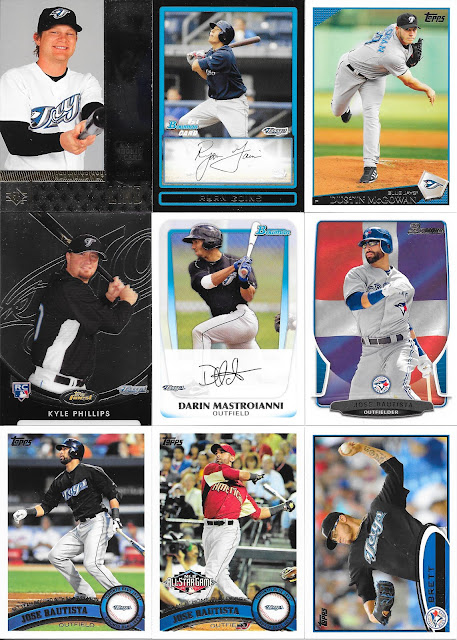 Moving to more recent cards, we get into the last decade or so and some Topps cards (and Bowman), that were needs. The Bowman parallel Bautista with the home country flag design isn't a bad way to do a parallel set, and a nice change from a simple border colour change. 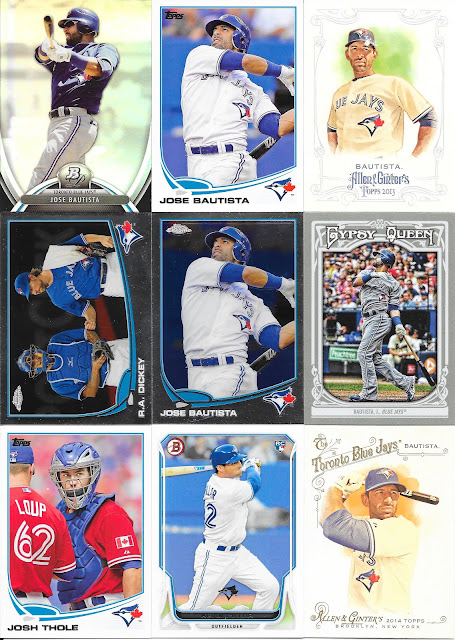 Bautista and the flagship and Chrome designs show exactly how the two differ - which isn't too much. Also, as much as I generally like the Allen & Ginter as well as Gypsy Queen designs, I have many many needs from those sets, but here there are a few out of the way. 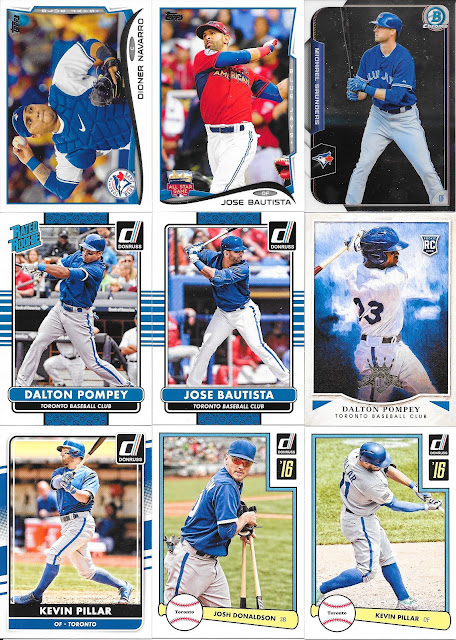 Moving into some Donruss sets which, though unlicensed, do a good job representing the older designs from when Donruss was licensed. 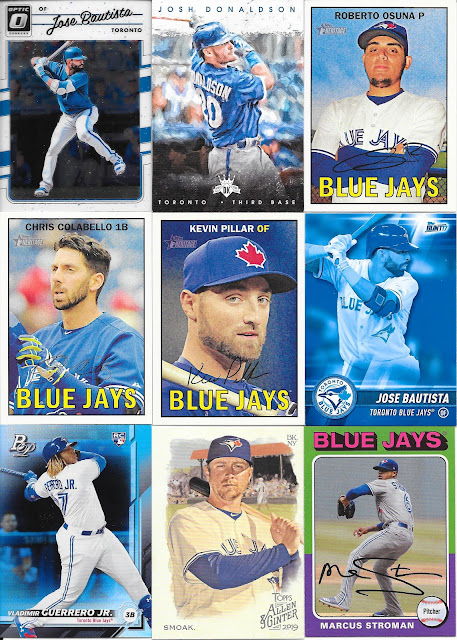 Some more heritage adds, but the show stealers here are the blue Bautista for the great look, and the short print Guerrero as it looks so nice in hand, and is a great shot of the big slugger. 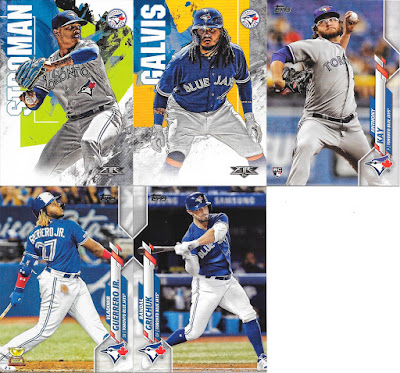 Finishing off the day with some newer cards and though I am not a big fan of the Fire sets thus far, at least they are definitely different from the standard fare cards. Also get to add a few 2020 cards which is always good as I don't think I even have many on my want list yet, just because I haven't gotten around to it yet.

As always, another big thanks for the cards, and, as always - check out baseballcardstore.ca - I can vouch that it is run by a great guy!
Posted by CrazieJoe at 8:00 AM