I mentioned getting a bunch of cards from a local collector - Jeff Scott - and that, as much as there is some stuff for me, that there would be a bunch I would look to trade and get some stuff to pass back to Jeff. He is a Bruins collector, so will be just looking for anything Bruins related in that regard.

So how am I going to go through the stuff? Well, I figure I will show everything here - maybe pulling separate what I am keeping, then for the rest, it will generally be up for grabs, but I will have some idea of some cards that will go to other collectors.

If you see anything you want, let me know and I'll let you know if it's already spoken for or not.

I am going to try and go through cards by set, give or take, but since there isn't much for basketball or football, will probably run through those as a sport.

Anyway, lets start with a small beginning which would be the basketball cards. It is still April, so baby steps here. 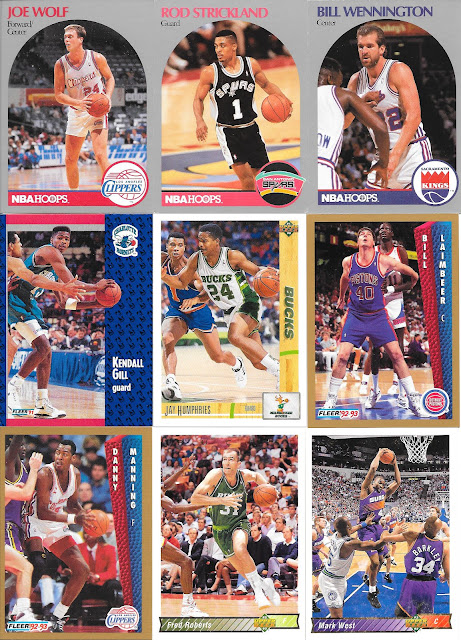 I am not a big basketball fan as I have said here before. Of these, the only name that rings a bell is Rod Strickland. Best shot would be Mark West going in for the bucket. 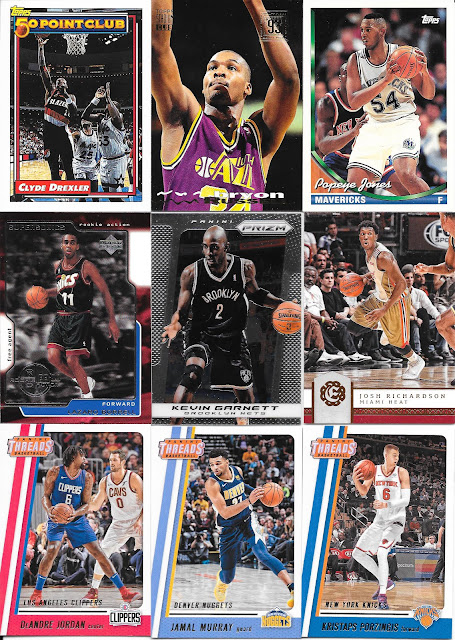 Clyde The Glide...and some newer cards. Heck, these are probably the newest basketball cards I have ever had in hand. 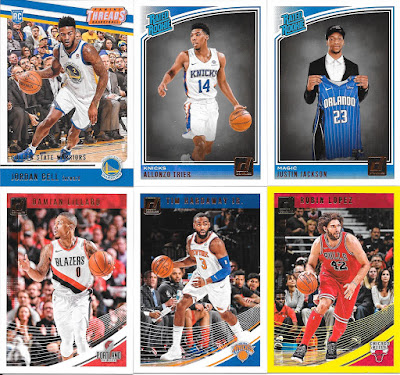 I haven't put these in yet, but I assume the yellow border will be a parallel.

Well, it's a start and what I am going to do is see if there are any trading partners I can send these off to, and if they happen to want to send anything back - it can be Boston cards for Jeff. He wasn't specifically looking for anything back, it was more to get cards to a home where they would be more enjoyed - but if I can get him some Bruins instead - great!
Posted by CrazieJoe at 8:00 AM