First - this doesn't count as spending money on cards...hear me out. A while back, before the world stopped, we ended up with two $10 off Indigo purchases discounts when you spend $X - can't remember what the threshold was.

So we had some stuff to buy anyway, but were $12 short of the amount (maybe it was $50) if we split the order in two to use both coupons. So, why not buy some packs of cards worth to spend the extra $12 and save $20?

I don't know about you, but I'm counting it as free cards!

So what did I get? 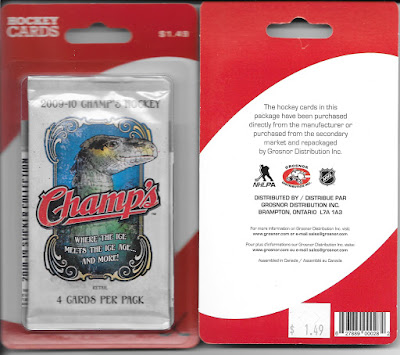 I picked up 8 of these. I figure Champ's was the best bet of the bunch, as the rest were base O Pee Chee packs. Given the size of the Champ's set being 580 cards, I am not going to be adding the set to my "collecting" list, but since these packs also have a bonus pack of stickers in them, and I know someone who like's his stickers, I get to have the fun of opening some packs, hopefully getting a couple Leafs, maybe an insert, and have some stickers to pass along!

Funny as I cracked them open, the sticker packs (2018-19) have individual prices on them of $1.39 and here they are with the Champ's packs for $1.49 (so is the Champ pack worth a dime?).
I am guessing these may not be too much of what I want, and maybe well picked over so as to see no inserts per se, but time will tell.

First pack - which I guess really is two... 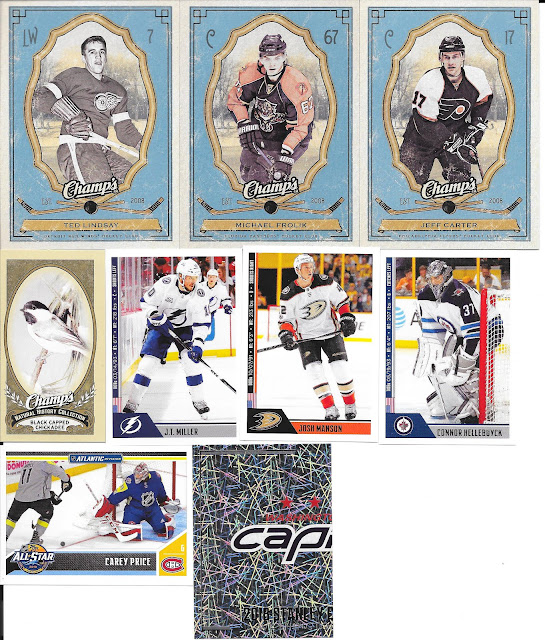 Player wise, the Ted Lindsay is pretty nice, but the only keeper from the bunch is the Chickadee mini - though the mini cards are base cards, but only part of the base set that is done in mini form.

These are the first 2018-19 Panini Stickers I've had in hand and didn't realize they are on the smaller side. They are decent for the small size and fit a lot on the front.