Some more Pete Rose today including some shots of him actually on the diamond - shocking I know. 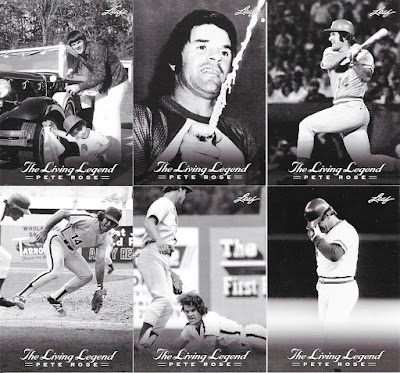 Yeah, we still have to start off with him chillin' with his son, and popping a champagne bottle, but hey - baseball parks on baseball cards follow that!

Pete Rose will always be a Cincinnati Red to me. It was where he spent most of his time, and since I didn't see him play really by time I started seeing anything baseball, it's mostly from clips and highlights, which are mainly with the Reds.

It's funny though, without really watching and paying attention, I did pick up on his time with Philly, and the Expos, and his time being a player and manager. As I said, I am in no specific way a Pete Rose collector or big fan, but his presences was big enough that, if you follow baseball, you know about the man. 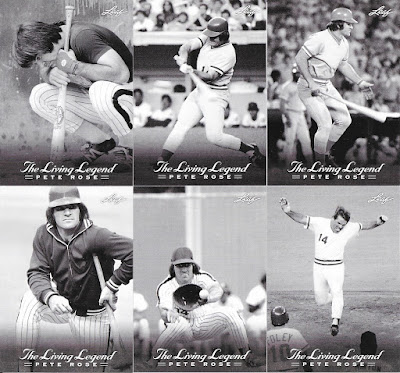 I could really go for some better centering on that middle bottom card...but really like the jubilation in the last one. 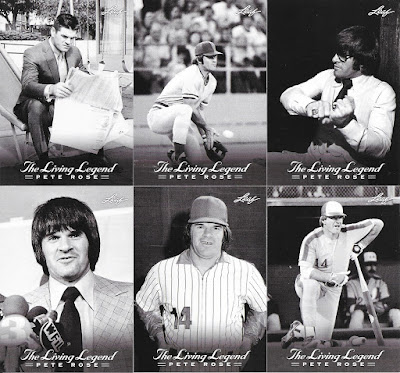 Hey - that last card looks familiar. To answer the question, yes, the autograph insert set in made up of 45 base card pictures used for the autographs, including the Expos one here.

I don't want to dwell on the details, as I am sure most who are reading here know that Pete Rose was a Hall of Fame player and is the career leader in hits, games, at bats and plate appearances, but is not in the Baseball Hall of Fame due to a lifetime ban (first, he is in the WWE Hall of Fame, and second, his ban in baseball was due to betting on baseball games which may or may not have included games he managed in).

Pete Rose does is a bit of a polarizing figure - what are your thoughts? Great player who deserves to be in the Hall, or was his ban deserving?

The interesting spin I'd take on it is, in this day and age, would we look differently at the problem of gambling addiction, and say it was a medical condition or something of that ilk? How times change...