Today we have the final pack from the Indigo packs I picked up. Though it has been a fun little distraction, I have generally got what I paid for when it comes to my own collecting. Including today, a few minis, a couple parallels and a couple Leafs. By no means horrible, but since I am not collecting either set, not a bunch to keep. 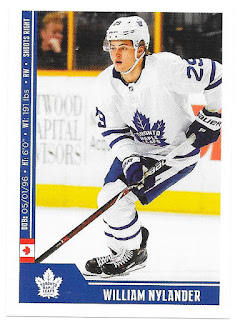 Now here's a star I can get behind! I was not a fan of his holding out a couple years ago. I know it's a case of "well, the owners make a lot of money, why can't I get mine", but it's still hard to see someone squabbling over how many millions they get paid just to play a game they love. However, in this case, I must say, there doesn't seem to be the hard feelings and long term "hurt" in having the situation happen, at least there doesn't seem to be the grudges that you could see happening.

Some base Champs which include a Red Kelly - which should have come in the red parallel colour, but no luck there. 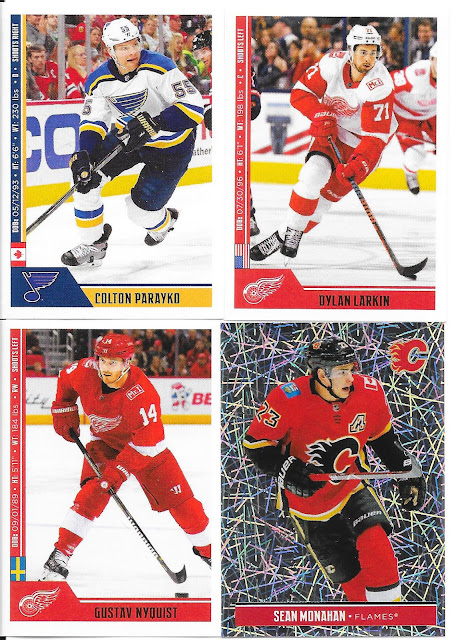 The rest of the stickers and... 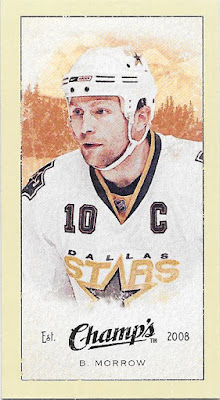 We end with a second Star mini in a row in Morrow.

Not a surprise, since I don't collect either of these sets, that this box ends up well down my list of best boxes/openings this year. Still, some good cards to pass along to others, and a few keepers including some decent minis, so not like it was a complete waste.
Posted by CrazieJoe at 8:00 AM