As usual with these packs, I try not to really look at what the inserts are until I need to, just to keep a bit more surprise. So, with this pack of 2009-10 Upper Deck, I wasn't expecting this... 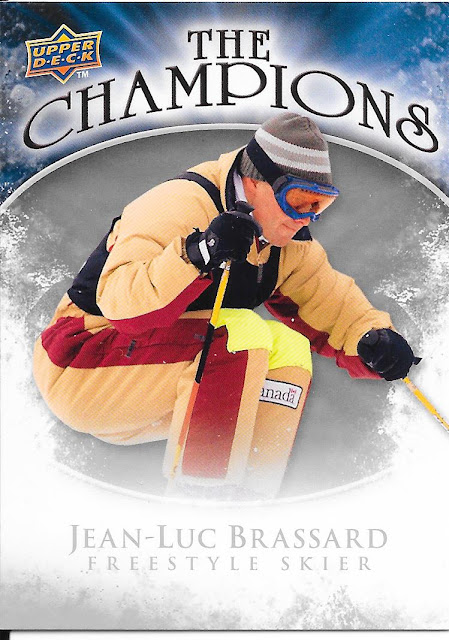 Probably not a name big with America sports followers, but I was the right age growing up, and following the Olympics that Brassard was a big deal. Also introduced many Canadians to the moguls (which, unlike the name may suggest, are not fuzzy little forest creatures - moguls sounds like such a thing). If you don't know, think of the moguls as doing a straight downhill ski, except there are bump the entire way, except a couple breaks where there are jumps. 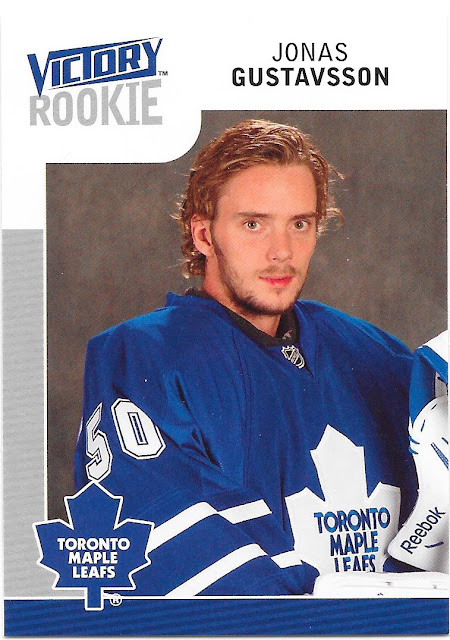 Sweeeet. Love the Leaf content, and new card for the collection too. 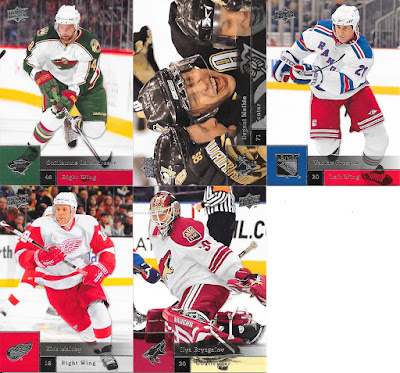 A great pack for new base adds as well, as these were the new ones. The Malkin is a great shot, even if it is horizontal. 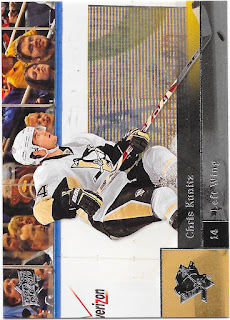 I'd say this was the best pack so far. 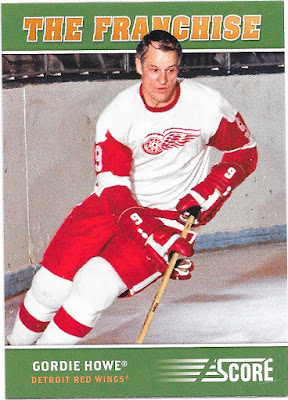 We start with something recent I mentioned as here is the final card from the 6 card insert set out of 2012-13 Score, "The Franchise". A great add and nice insert set to have knocked off.

Speaking of knocking off, these three cards provide the single Jays cards in the respective sets. These are the first Silver Slugger and Homerun Heroes cards I think I have ever had in hand...now only about 30 years after the products were out. 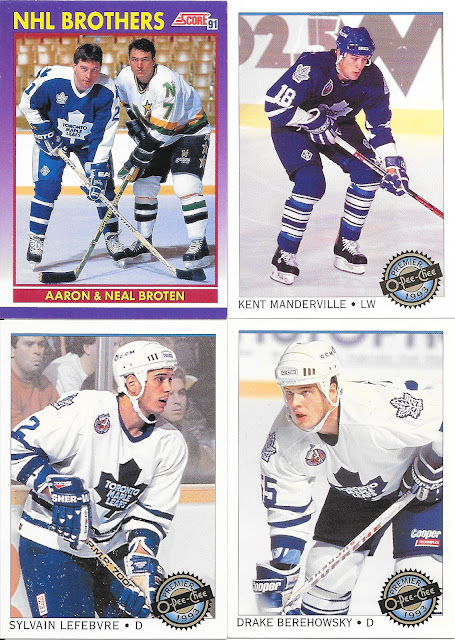 Other wrap up items - we have some last cards out of Toronto team sets with some 1993 O Pee Chee Premier and the American purple bordered 1001-92 Score set. 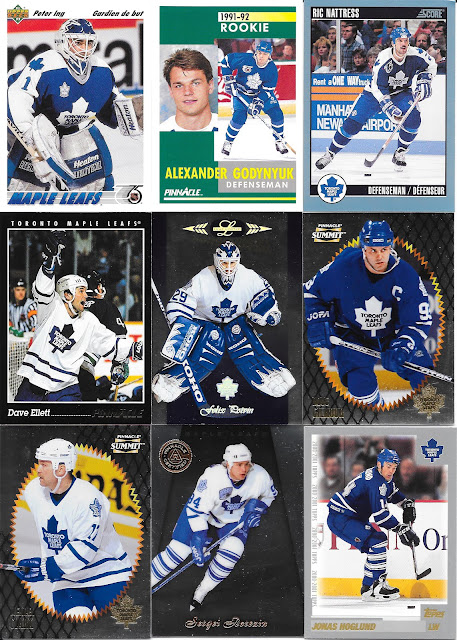 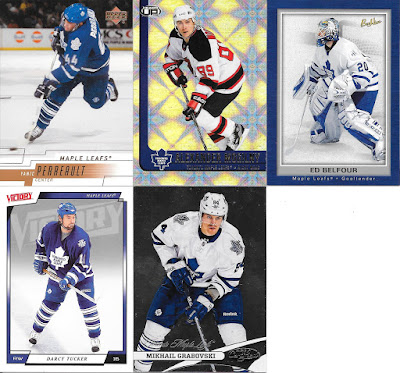 Not to fear - lots of other Leaf goodies of course. As much as I really like the higher end feel and cards of Leaf Limited and Summit - that Ed Belfour Beehive card with the blue border is really nice. I think the colour just makes it pop nicely. 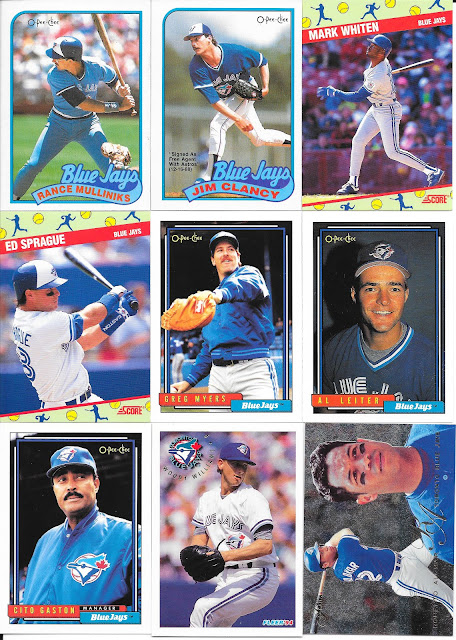 I really should have more 1989 and 1991 O Pee Chee cards. I don't know why, even at the time, it was the Topps versions I ended up with a lot. Being in Toronto, I would have thought it would all be O Pee Chee in stores.

The Robbie Flair is much better in hand, the shiny background doesn't scan as nicely here as it actually is in hand. 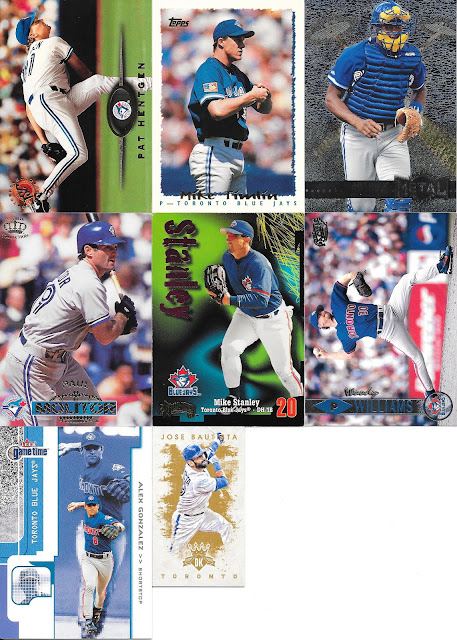 Some great variety in Jays here. A pretty mini with the 2016 Diamond King, otherwise - I am not a fan of a couple of the designs, specifically the Stanley Circa Thunder which is so 90s with all the colour, and the later Fleer Game Time design which doesn't do much for me with the excessive bordering designs. 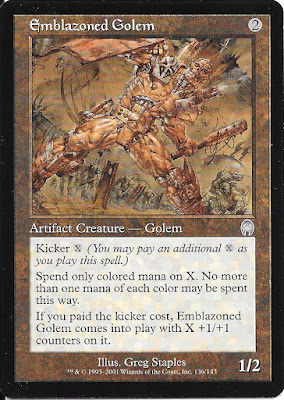 Well that was unexpected. Didn't think I'd see a Magic card come along my way, but definitely a solid add as this is a card from Apocalypse circa 2001. The symbol (mid right of the card) being silver means it is an uncommon.

Wouldn't make my favourite artwork list, but a new one for my collection of artifact cards, and another golem artifact too!

Another awesome package of cards from baseballcardstoreca!
Posted by CrazieJoe at 8:00 AM