Getting into the third pack from the box, would hope there may be some Toronto content, but we start off with these... 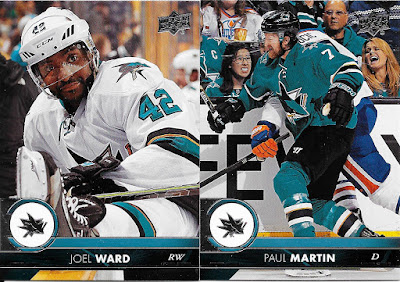 Joel - that is just about the expression I had seeing these come out, and both being dupes.

As far as expansion teams go, maybe it's my youth talking, but I always felt the San Jose expansion went well. Sure, maybe not so much on the ice as they missed the playoffs the first couple years, and took a while longer to get to being a .500 club, but for an expansion team, I do feel there should be a little level of "paying your dues". Heck, if just being new can't get you sell outs the first couple years, even if the team sticks, then the place shouldn't have a team.

Happily, the rest of the pack are keepers. 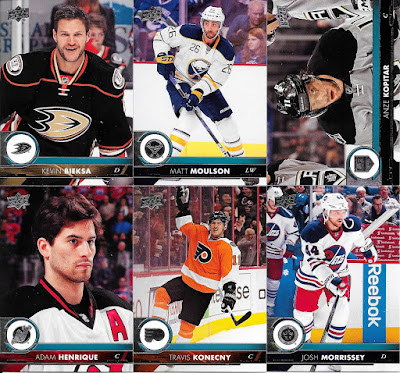 I really like the old school Jets uniforms. I can't say that enough as I think they are so fitting, and I was so glad when Winnipeg got a franchise again, that the name was the one chosen as it just fit so well.

No inserts today, but that's alright.