Ah, The Whalers and more from Jeff 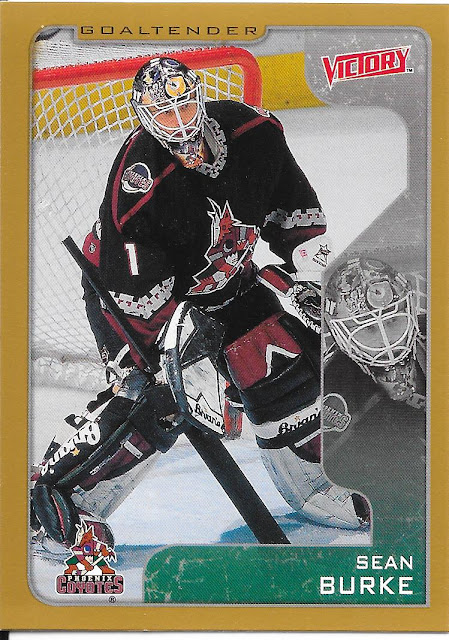 I remember Sean best with the Hartford Whalers ahead of their move from the city. He was in net for them most of the last 5 seasons ahead of their move in 1997. Sure, those last five seasons saw .500 or lower win percentages for Sean, but there wasn't a great team in front of him. Hartford didn't make the playoffs any of those years.
Sean never did win a Stanley Cup in his long career, and over the 18 years, he played in 9 different cities, though Hartford was the number one team for games played.
Sean continues to be involved in hockey after his on ice career finished, which isn't unusual for many of the longer tenured vets of the game. 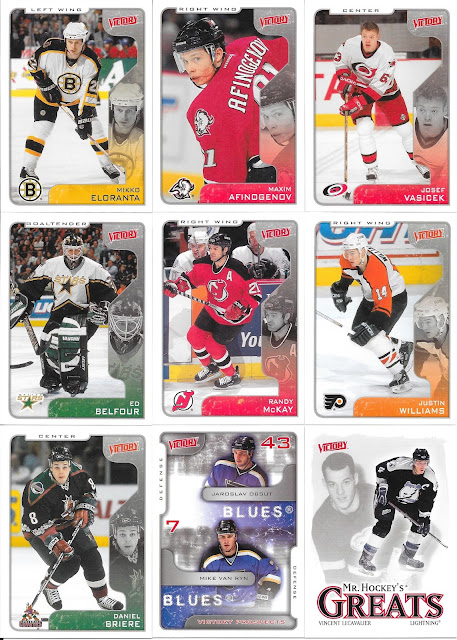 Another crop of base cards including no surprise in Mr. Hockey's Greats. As for the Blues rookies...Osbut had 7 NHL games while Van Ryn lasted 8 seasons, including the last one which was about 27 games with Toronto.
6 Packs, 60 Cards, 197 Points.
I also want to (finally) share some cards Jeff Scott send to me that arrived last week. With the 1991 Topps and 1990 Donruss mini projects I ran through last week, I didn't have time to scan and share these, but I do now! 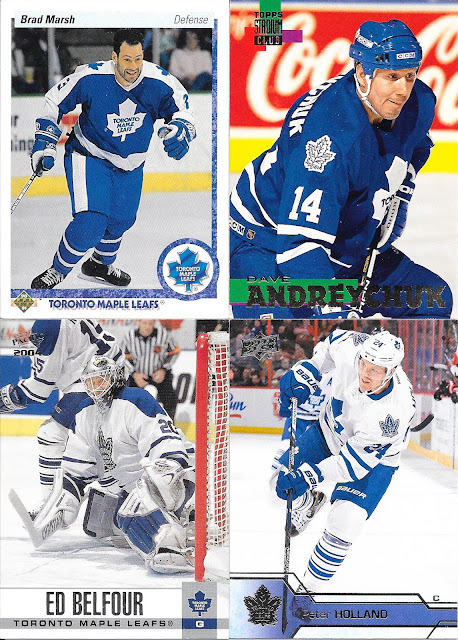 First up, we have a few Leaf additions. I know I had cleaned Jeff out before, so I assume these are relatively new pick ups for him. I really like the Ed Belfour card, clean design on the front and a great pose.
There was also one set addition... 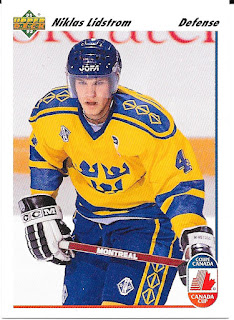 early 90s Upper Deck - still trying to finish those.
Where Jeff really added a bit for me, was the inserts/parallels collection. 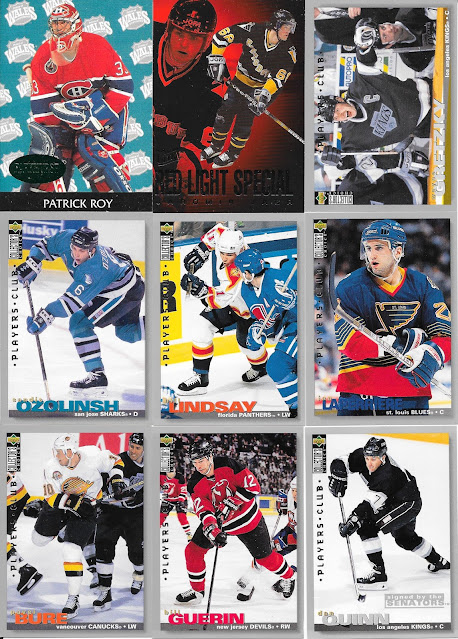 The only way Patrick Roy gets to stick around here is with these types of cards - I will overcome the subject of the card and let him stay for the snazzy Emerald Parkhurst parallel-ness of the card.
Jeff must have come across a bunch of Player's Club parallel cards here - a bunch fro 1995-96, and that grey border looks really nice with the Kings colours.
As I was a big Pittsburgh fan back in the day, enjoy the Jagr cards as well. 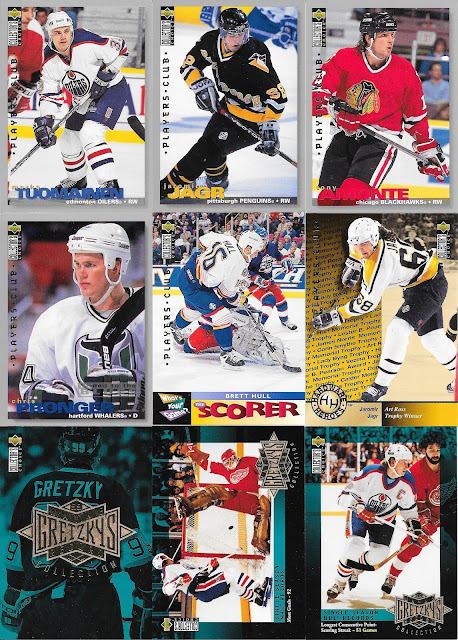 Speaking of Jagr, two more excellent cards here, and three more Gretzky inserts (Jeff had sent a few of these along before, so now I'm almost tempted to trade and complete the insert set). 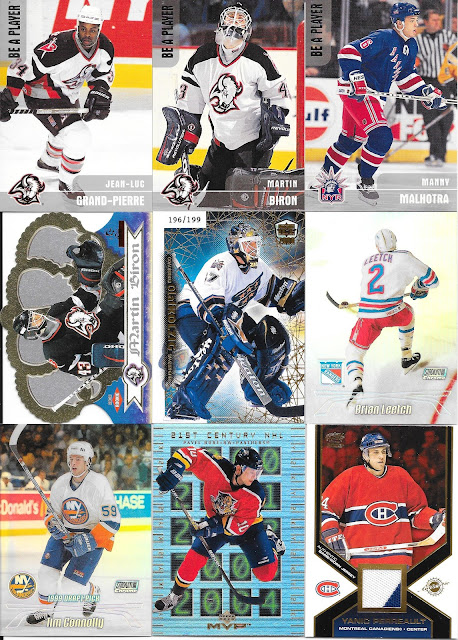 The last bunch, but definitely not least - three SN Be A Player cards, each to 1,000, which is on the back, the Pacific Crown Biron is actually numbered to a mere 99, which is on the front but really hard to see.
The Kolzig at least makes the SN very clear on the front, which I greatly appreciate.
Stadium Club cards in this refractor look even better than normal Stadium Club cards. The scans still don't do them justice compared to holding in hand.
We have a snazzy foil 21st Century Bure insert and a great design for a jersey card - heck, I am going to assume that the patch is actually from a Toronto jersey, which will make it much easier to keep this in my collection!
Last keep is actually a new unopened pack for the collection...

Yes - Esso hockey cards from the late 80s. I do have a few of the actual cards, but this is the first pack I have seen, and now, it's mine! These cards are smaller than the regular size, but a bit bigger than say A&G Minis.
Jeff does have some other cards up for grabs, and one that, I'm not sure really what to get back for him... 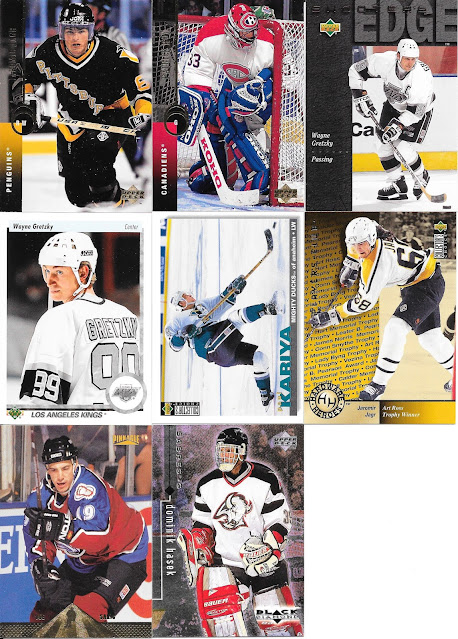 Yeah - so the Hank Aaron is a solid card, and I am more than happy to trade it away for anything that would interest Jeff (Bruins, but for baseball he does player collect Tony Gwynn). I had someone on TCDB offer a trade as soon as I put it up - for stuff I would want - and I had to look through what they had for Jeff instead and couldn't make it happen.
Anyone interested, let me know and see what we can get to Jeff.
Posted by CrazieJoe at 8:00 AM