Victory Will Be Had

It is the start of a long weekend and why not start this long weekend with another box purchase from Dave & Adams of last year. 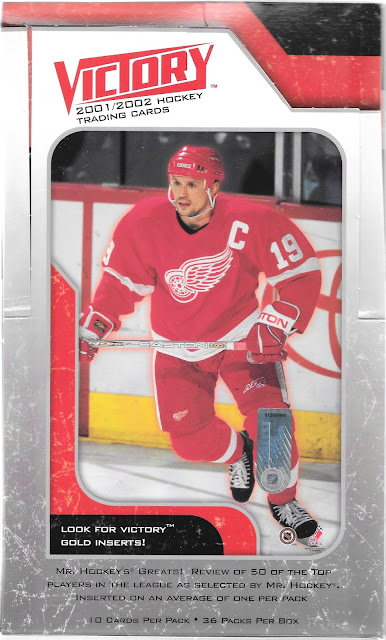 Yes, it is considered "low end", yes it is pretty basic in having subsets and really only the gold parallel for "chase" cards - though they fall every other pack, but with 360 cards in the box (well 350 after I swipe a pack for the unopened materials collection) and a set which consists of 453 cards for the base, I should, collation willing, get about 75% of the way there.
From the box, here is the extensive odds write up...

Going into this, I do have 25 of the base cards from this set, and kept those knowing I had this box to go through.
So, swiping one of the packs aside... 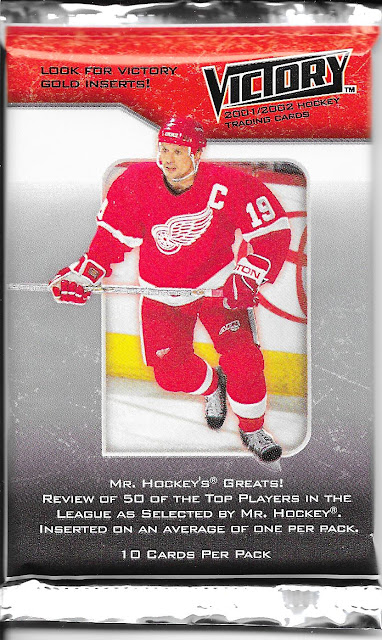 and reminding of the scoring for the box (though that should be fairly easy as there is no real chase odds, just how many Leaf cards I get that will really impact the score)...
So let's take a look at the first pack. With these being 10 cards, I will generally try to focus a bit on one and show the other 9. Most times, I suspect those will be the Gordie Howe "Mr. Hockey's Greats" cards and focus in a bit on them.
Pack 1: 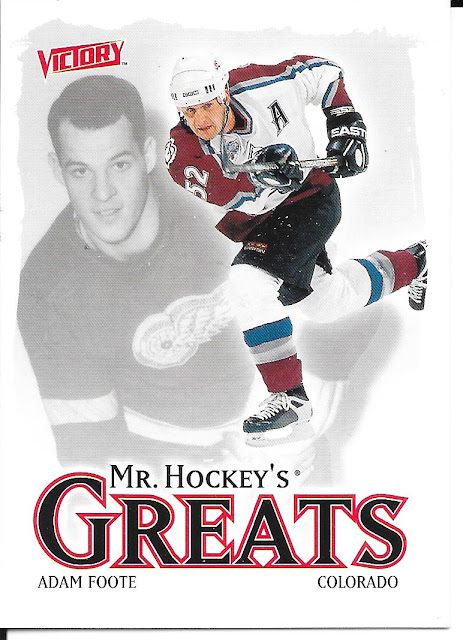 Adam Foote is a Toronto boy, so local-ish, and started his NHL career with the Quebec Nordiques in 1991 after being drafted by them in the 2nd round in 1989. Adam was with Quebec when the team transitioned to Colorado and completed his first stint with the team with the 2003-04 season. He ended up with Columbus for close to three seasons before going back to Colorado via trade, for a few more before calling it a career after the 2010-11 season. Adam won two cups, both with Colorado during his first stint with wins in 1995-96 and 2000-01.
Adam's number 52 was retired by Colorado, and he was the last Nordique to play in the NHL - can understand why he would be singled out in this set. 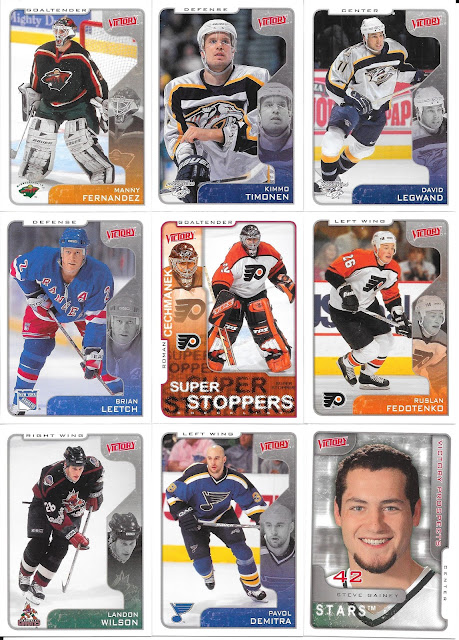 1 Pack, 10 Cards, 30 Points.
Speaking of having victory, I had a little victory by way of a sweet trade with TCDB member jlcre2003. The trade was some 50-60 cards going each way, but some of what I received is going to Jeff Scott, so won't share those Boston,e tc, cards, but here are the ones that were for me! 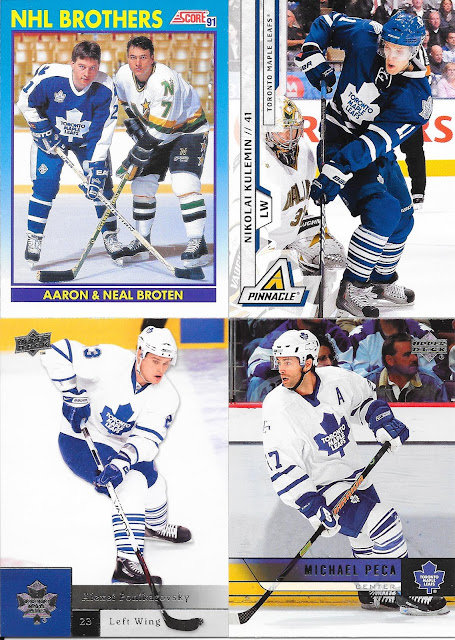 We start with a few hockey cards that are really spread out time wise. I forgot that Peca actually wended up with Toronto for 35 games in 2006-07. 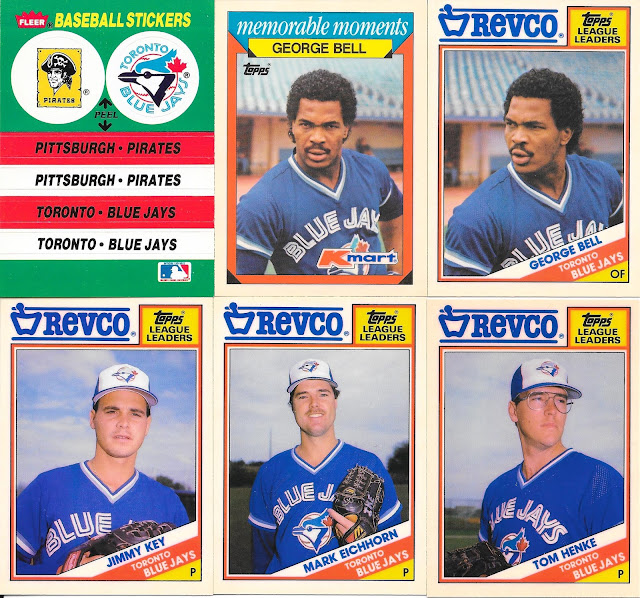 For baseball, we have some nice odd 80s stuff with the lone Jays card in the 1988 K-Mart Memorable Moments set, and the entire Jays collection from the 1988 Topps Revco League Leaders set. 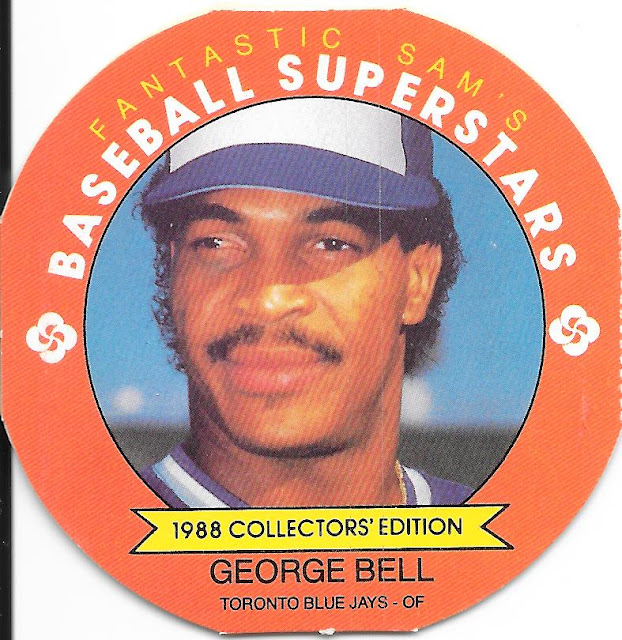 We also get the lone Jays card for the Fantastic Sam's disc set, which is a nice odd one that is just as wide as a normal card, but round-ish. 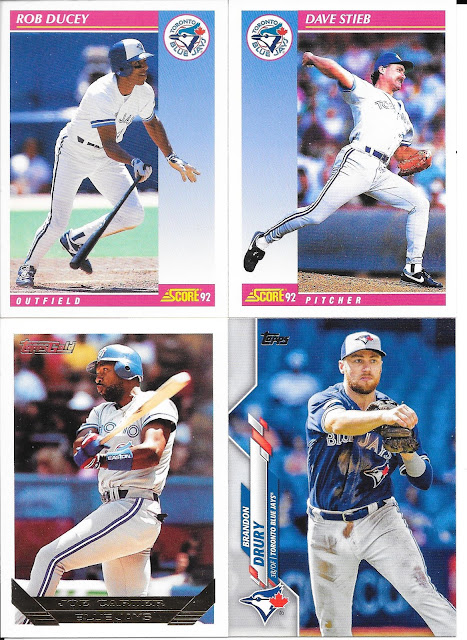 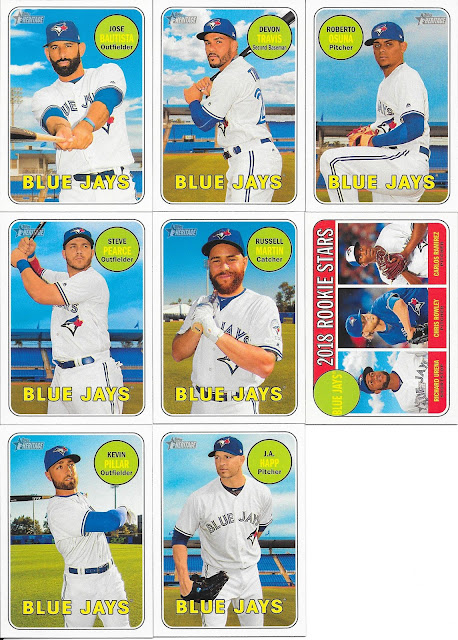 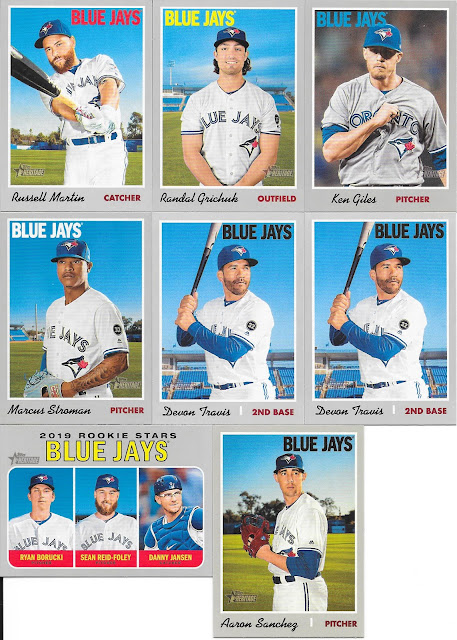 Plenty of Heritage help as I don't buy any of it, but do want to collect the Jays, so trading is where I get them all, and here is a great influx for a couple of the years.

The checklist is "normal", while the others are "dark variations". I really need to go through my 1991 Topps cards for these variations and to see what I do or don't have for Jays between normal and dark variations.
A great trade that is much appreciated!
Posted by CrazieJoe at 8:00 AM