Taking Cabz For A Ride

Well, the pandemic really made this trade extend longer than any other trade I have every had, and the delay was fully my side (and explainable given the situation). I entered a trade with TCDB member cabz05 back at the start of March, got the package all ready for him and took it to work to handle at the post office there.
I didn't get the chance that day - which was March 13th...and with the pandemic, that was my last day at the office and we moved to working from home as we stopped having people go into the office. It wasn't until July that I was able to get a coworker who was in the office to pick it up and drop it off at my home, so I could then send it off.
Now - I made sure to communicate regularly with cabz05 on it, and he was very understanding, which I appreciate, and I think most people would be given the circumstances. As such, I didn't want to show off the cards he had sent to me until the trade was finally completed all around and he had his cards finally (I had received my side back in April or May - it has been so long, I don't even remember honestly).
So today, at the start of September, I finally get to share these cards which I have been sitting on my desk for months. 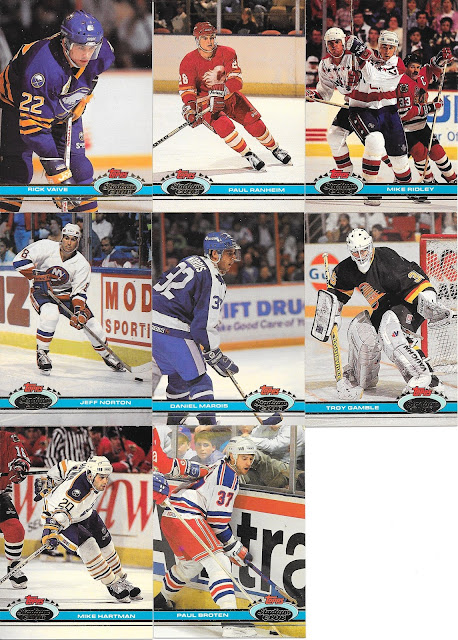 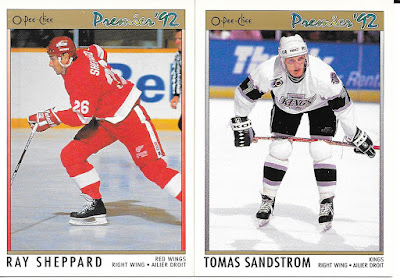 The first items up here are cards that help move along two hockey set builds. The 1991-92 O Pee Chee Premier set is getting pretty close as it's now under 10 cards, while Stadium Club isn't quite there yet.
Speaking of completing, there were also a few cards which helped complete Toronto team sets... 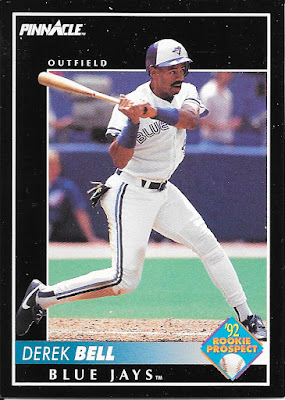 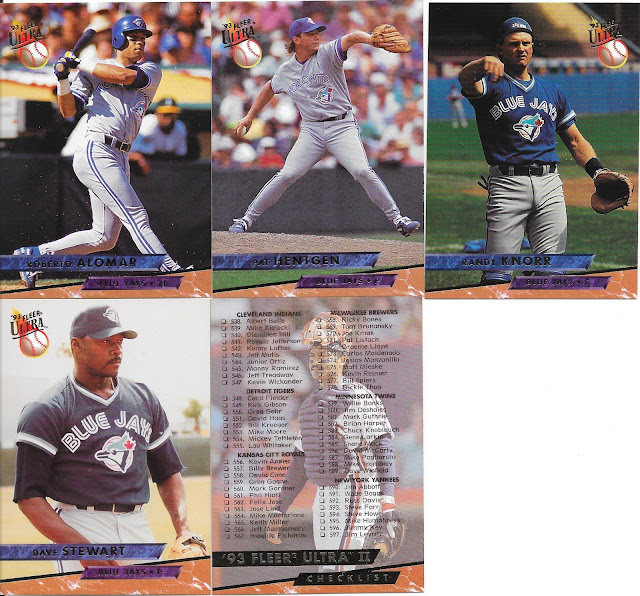 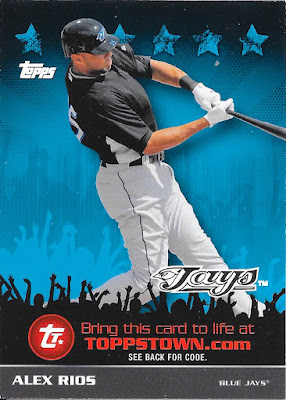 1992 Pinnacle with Derek Bell, and 1993 Ultra with these 5 cards knock off a couple "larger" - see 20 or so - card team sets, which are always great to take of. The ToppsTown which was a much smaller little insert, well, this is one of the two Jays for that one.
Heck, completing sets, there was also one set in it's entirety... 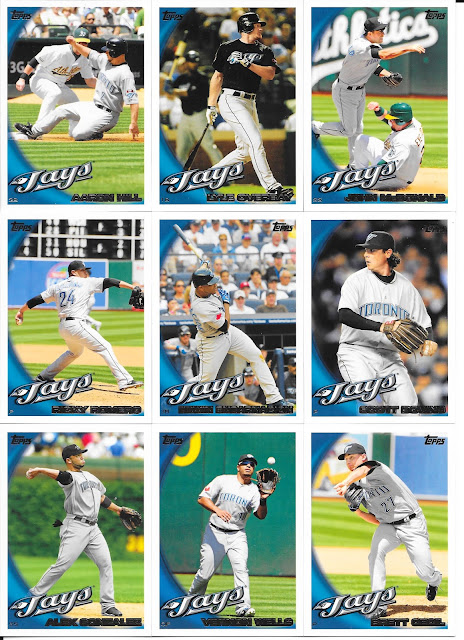 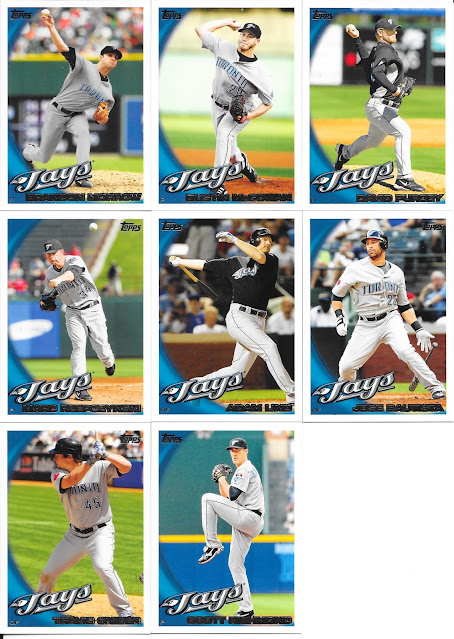 This is the Toronto Blue Jays Team Set version of 2010 Topps - all 17 cards. Hard to pick a best pic as many are quite similar, but would toss up between Hill and McDonald as I always enjoy a good action shot.
We then get to the rest of the general Toronto team card goodness. 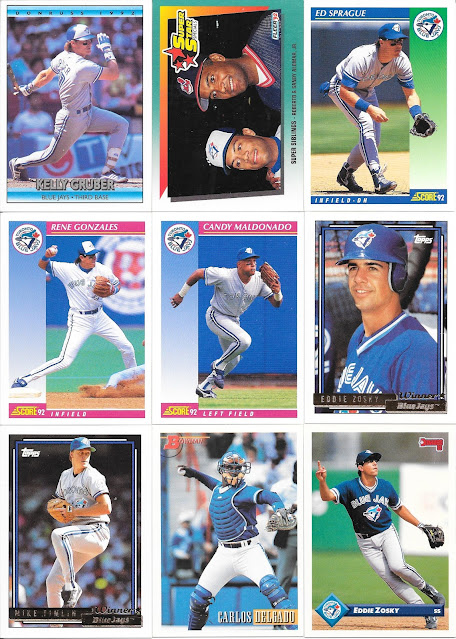 .Always happy to get some more Topps Gold parallel cards. 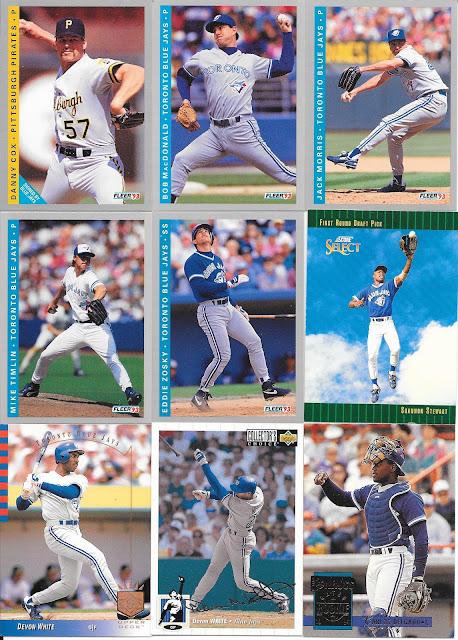 Some good help on 1993 Fleer which I need dupe Jays for anyway as I do have it on my list of slow building sets. I also always appreciate a good early year Delgado card, as we get a couple examples of this catcher stage in his career/ 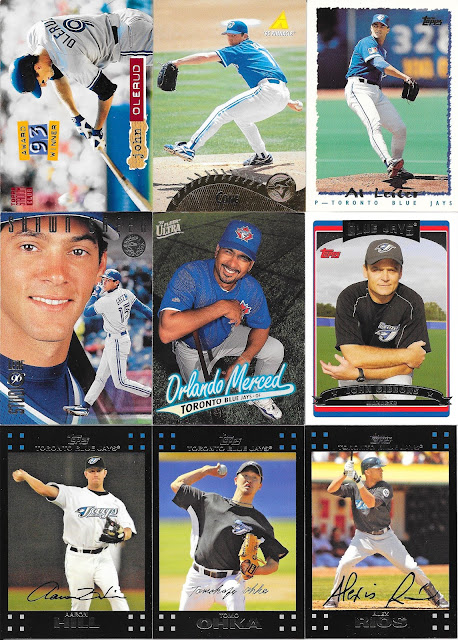 Well, if you wanted a close up pic of Shawn Green - Donruss Studio has you covered!
I also think the black border 2007 Topps is a bit underrated, likely because the things can ding up easily, but I like the sharp look with the black borders. 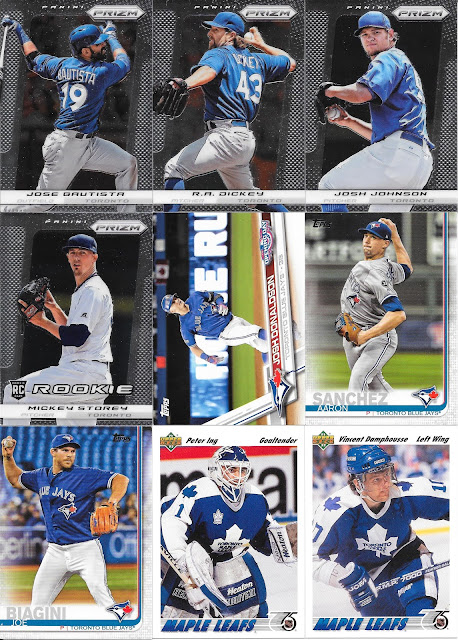 Nice Panini cards with those "Toronto" players and not Blue Jays. We also get a bit of hockey. 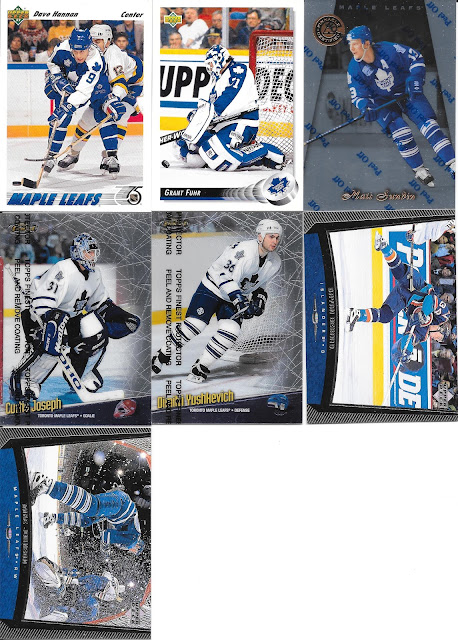 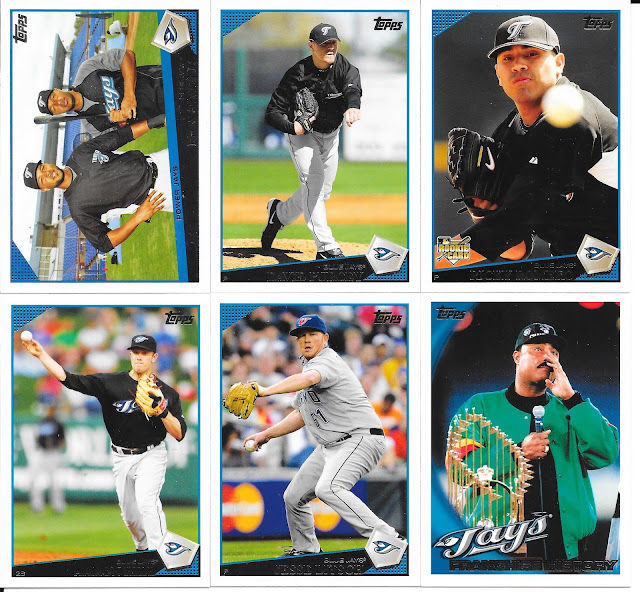 Had to ensure the last card was the team card, because Cito Gaston tearing up and the World Series trophy all in one shot - I mean, come on - that's just awesome and envokes feelings of those early 90s great times.
Thanks again cabz05 for the trade, and your patience in getting this trade done.
Posted by CrazieJoe at 8:00 AM