So in the base cards today, a couple things stand out to me... 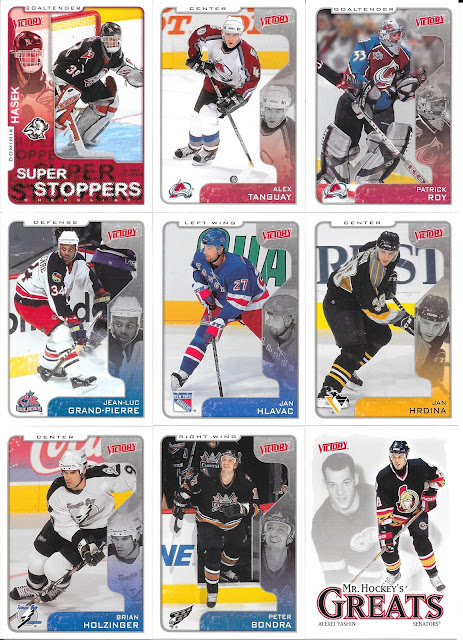 With two high calibre goalies, I remember Hasek, when he first arrived in the NHL, being compared among my friends to Roy (which I always argued Hasek was nothing like Roy because I though Hasek may actually be a good goalie...but Toronto bias...what can I say).

It's one of those great discussions of sports players - comparing my guy versus your guy, or someone new versus a veteran, or someone from your generation versus your dad's or son's generation - who was the better player, who did more for there team, etc. I always find these discussions heavily personally biased - which is fine as everyone will have their personal reasons like watching Roy win the Stanley Cup for a Montreal fan, or having Hasek help turn Buffalo around for a Sabres fan, but time always seems to make players seem different than when they played.

I remember having a stack of cards and a friend and I would just randomly pull a couple and argue about who was better (much of the time we would agree - like Gretzky versus anyone). It was a fun way to spend time with the cards and with a friend.

Peter Bondra is one of those players that I think "aged well" as it were. Don't get me wrong, he had a great run for a number of years with Washington. With that Washington connection, I remember when Ovechkin starts, being compared to Bondra. How time has changed that comparison as Ovi has amassed a long streak of great seasons. Again, Bondra is great and may be a borderline Hall of Famer if you look back at his stats, but even Bondra will agree, Ovechkin has well surpassed him in a comparison.

The comparison is fun though - what would a team with Bondra and Ovi look like? How would they play together? What if they were generationally switched - would Ovi have done better in Bondra's era, or vice versa.

The discussions could go on and on.

That's part of what makes the collecting fun - the little pieces of cardboard that provide stats, fuel to the fire of who did well when, and who accomplished what, or, what they were like before they accomplished much... 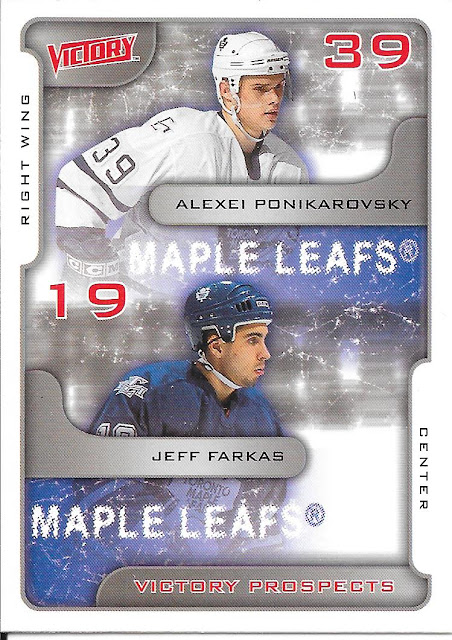 Farkas here before an NHL career of about 15 games, a third of which were in the playoffs, and Ponikarovksy right at the start of a 477 game career spent mostly in Toronto.