We start today's pack with a solid Batista Bomb. 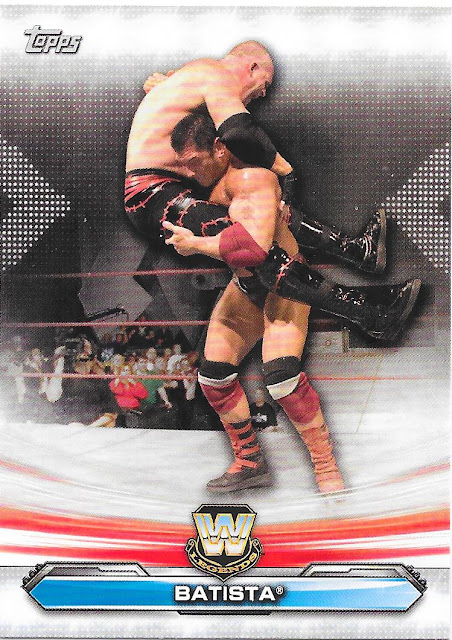 The man had decent hair - nit not so much anymore as we saw on the base card. I think he is the only wrestler who has a base card and a card in the legends of Raw insert set, so he has that going for him.

Well, could count Kane on that too since he is on this card, though the card obviously isn't about him. 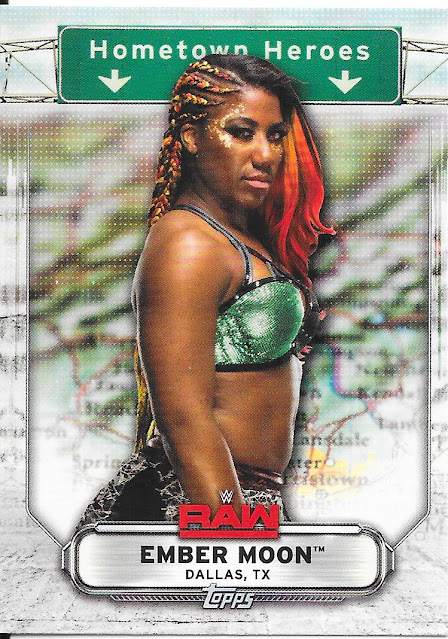 Ember Moon on a nice hometown hero card. We already saw Booker T in the same insert, also from Texas (actually Booker helped train Ember). With 50 cards in this insert set, would have thought they could do it without repeat cities, but just a minor complaint.

Lastly, the new base cards. 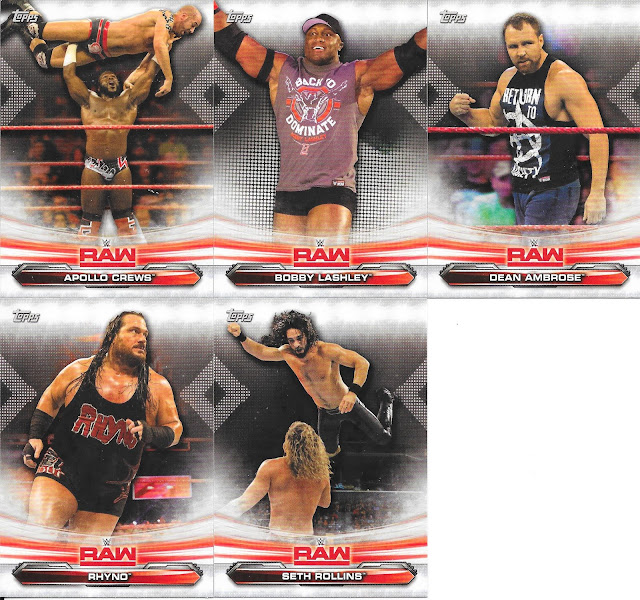 That's a pretty powerful pack of cards - Lashley, Ambrose and Rollins (no offence to Rhyno or Apollo).

Before going - I was able to scan the bunch of MTG artifact cards I picked up recently from 401games, so let's take a go through. 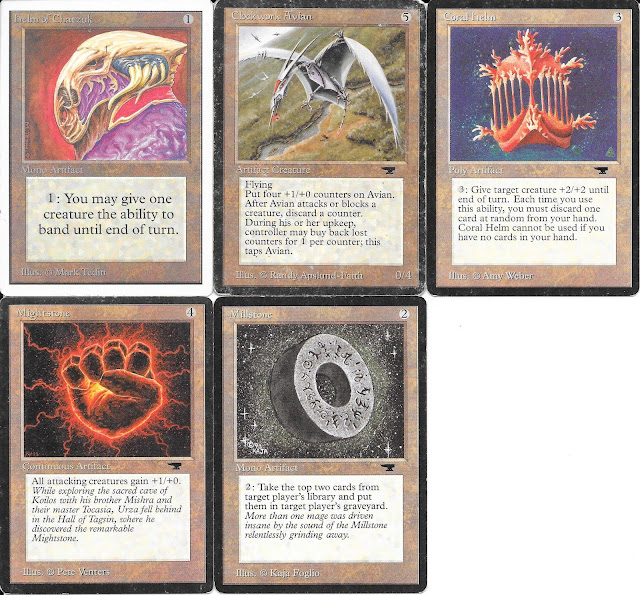 So, I started with a few old school cards including an Unlimited Helm with the white border looking pretty darn crisp. Not bad for being over 25 years old as it usually gets grimy looking and a little dirty from play.
The rest are Antiquities cards - each of these 5 cost a few bucks each, and the condition on the Clockwork Avian is lower than I would have called it (definitely Heavily Player, not Moderately Played).
I keep knocking off some of the middling value old cards, but won't be getting any of the big artifacts any time soon - not going to spent hundreds of dollars on single cards. 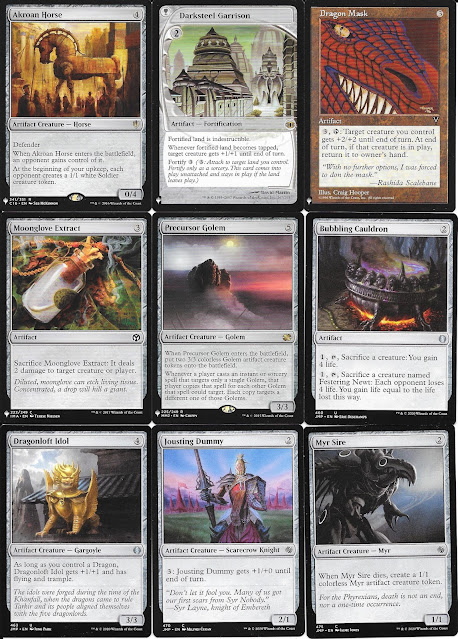 We then skip all the way to current cards with Mystery set cards (those with the tiny Magic symbol in the bottom left hand corner, that are otherwise identical to original printings of the cards.
Next set is Jumpstart from earlier this year.
The jousting Dummy is an interesting card - at 3 mana per +1/+0, it's a bit much, but my artifact deck could create a whole bunch of mana, so I could see using it in my old deck. 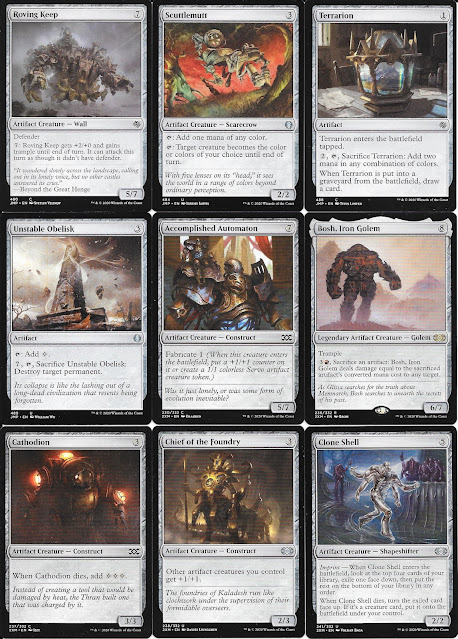 To the same extent, the Roving Keep, costs a lot to get it to attack, but that was doable in my old deck.
Also - I totally read Scuttlemutt as Scuttlebutt the first time I saw it.
More big baddies between Accomplished Automaton and Bosh (not Chris). 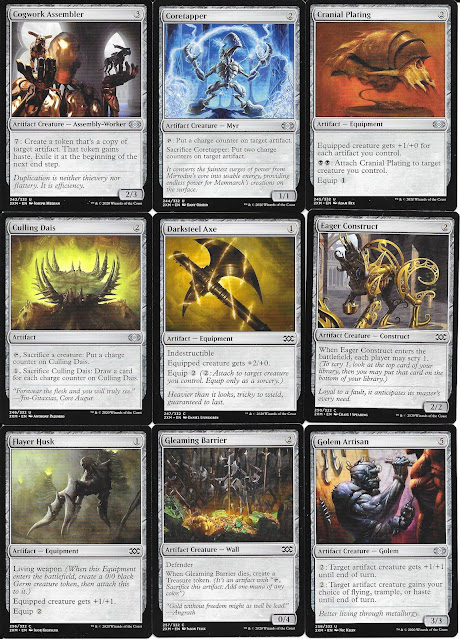 These artifacts are all from Double Masters which was a huge success of a set and has a whole bunch of artifacts. I just pulled the trigger on all the cheap/low hanging fruit as there are a number of more expensive artifacts too. Hopefully prices will drop a bit over the next year, but time will tell. 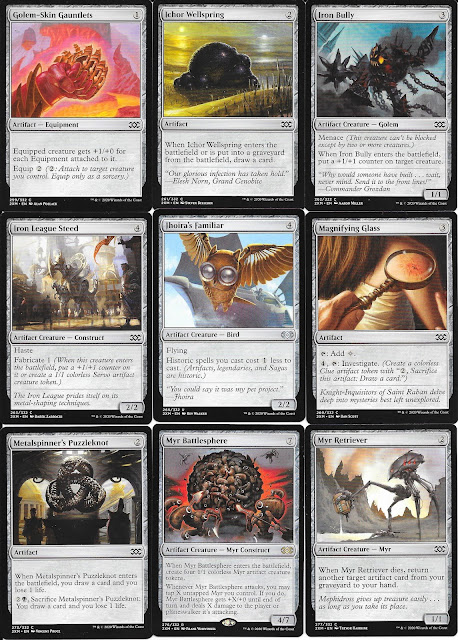 Getting to the artwork, which I always like to focus on, the Jhoira's Familiar is so cute and well done. I know I have it in another set, but will take it in copies here are well, no problem. 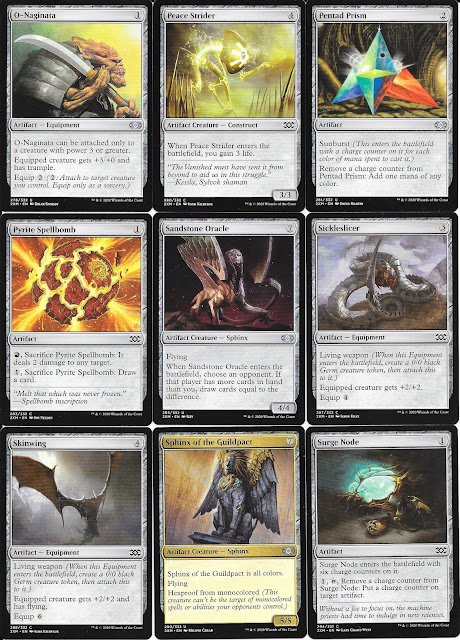 A couple more interesting cards here...
The Sickleslicer, the fact it is a living artifact and you create a creature to attach it to when it enters play is an interesting mechanic.
Separately - I hate that the Sphinx in gold coloured. I get it - the ability talks about it being all colours, so instead of grey, it's gold which signifies the multiple colours. Still - almost enough for me not to include it with the artifact collection. Almost. 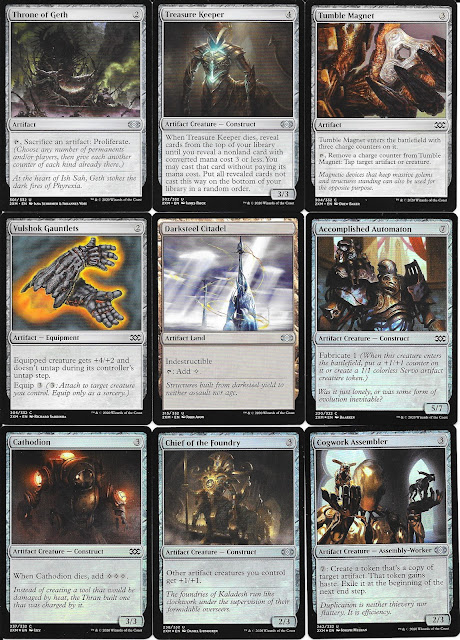 I won't go out of my way for lands that produce colourless mana, but found one here so picked it up, then there are a bunch of apparent dupes, which are foil versions. 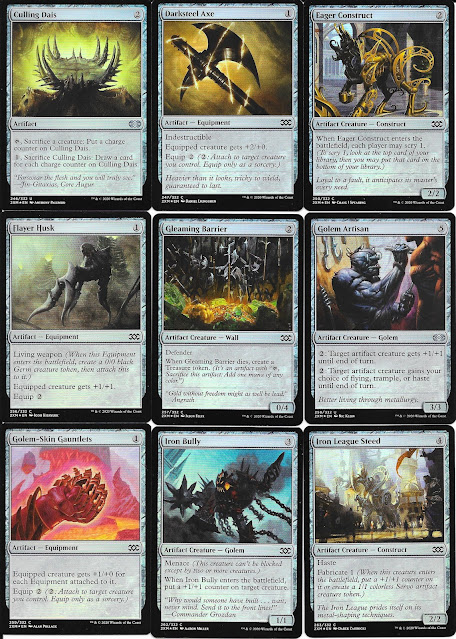 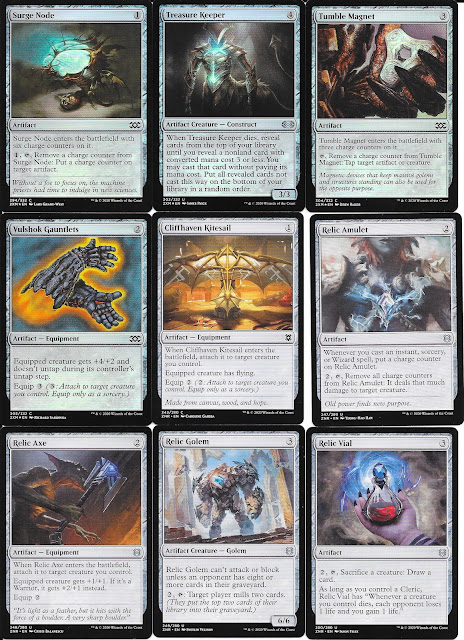 The last set touched upon is Zendikar Rising with some base and some foil versions as well. 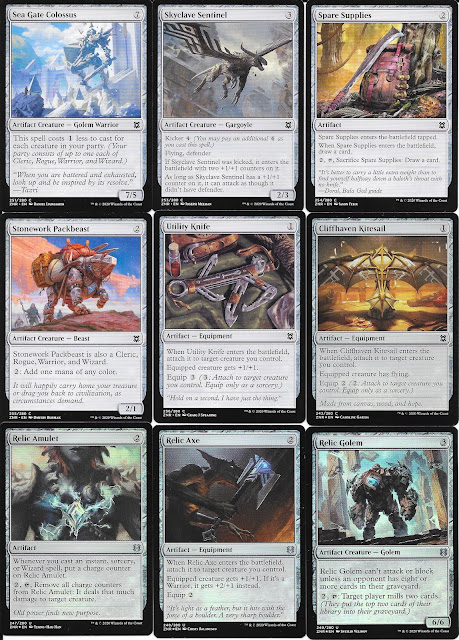 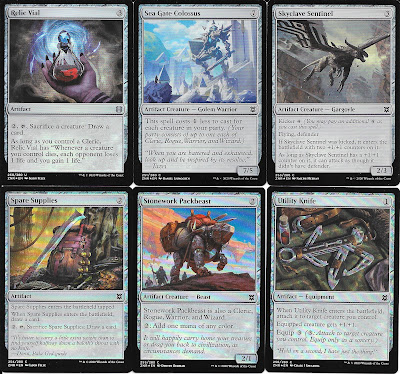 Phew! I'd call that a nice bunch of additions!

I suspect very few out there have any Magic cards, let alone artifacts, but if you have any, I am happy to trade for them and trade any sports cards I have, doing so in your favour. Just putting it out there if anyone is interested.