Join The Club On Canada Day

I can't believe the year is half over already...and Happy Canada Day! With so much going on in the world today...different than last year, but the same too...important to be grateful for those things you can be grateful for.

The last year plus has been a great lesson in family, the importance of it, and being able to spend more time with them than I could have hoped for, though not ideal reasons for it happening, the time is something I have cherished. Family is the best club to be a part of...

With that horrible segue, let's look at the inserts for today... 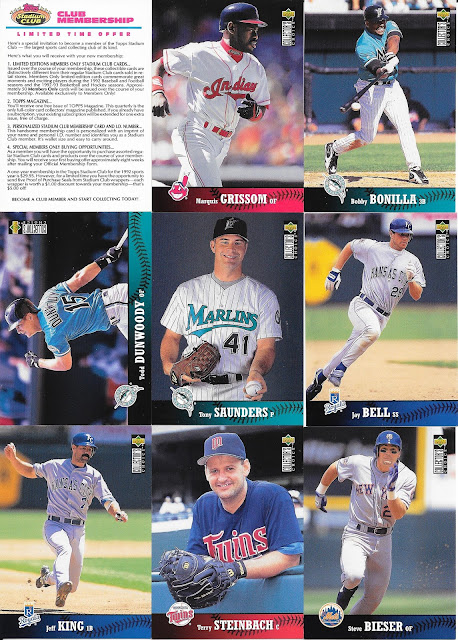 Another bunch of the 1997 Collector's Choice Update cards and an offer to an exclusive club - The Stadium Club. A one year subscription to the club was $29.95 and there were perks like cards and offers.
Not sure if anyone out there ever did these offers, I know I didn't. Pretty interesting now, looking back at what the offers were, and just a good reminder of one of the ways the card companies worked to provide perks (or make money), back in the day. 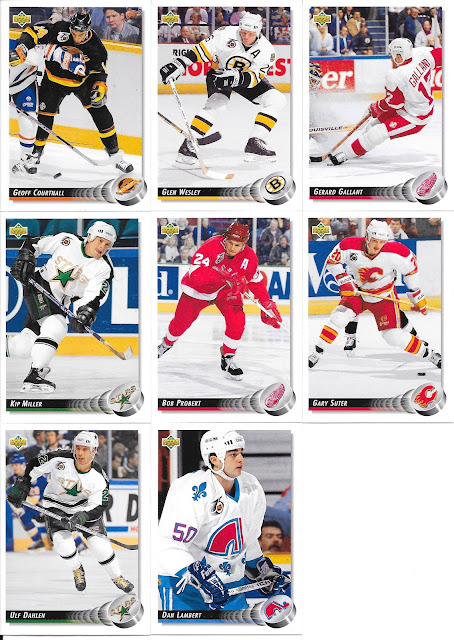 Except of course, the backs are the dual text/logo holograms. 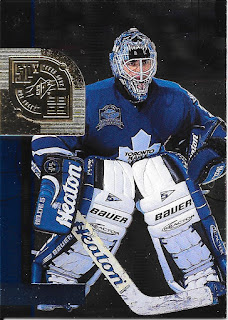 Always find it odd that these top prospect type sets have stars and such in them. Not exactly a top prospect, but great card...just doesn't scan that well. 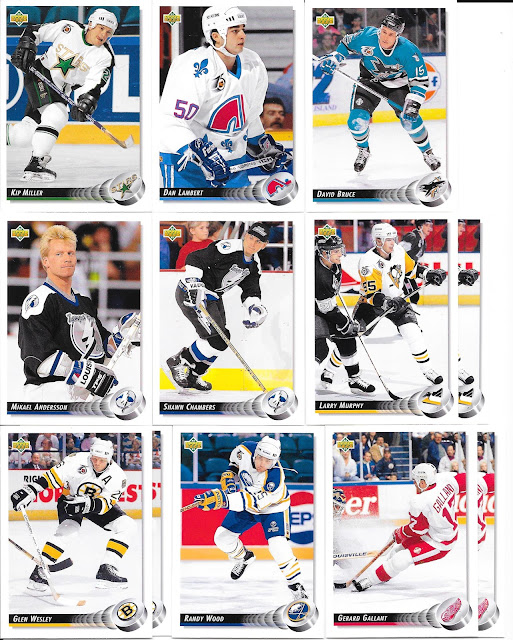 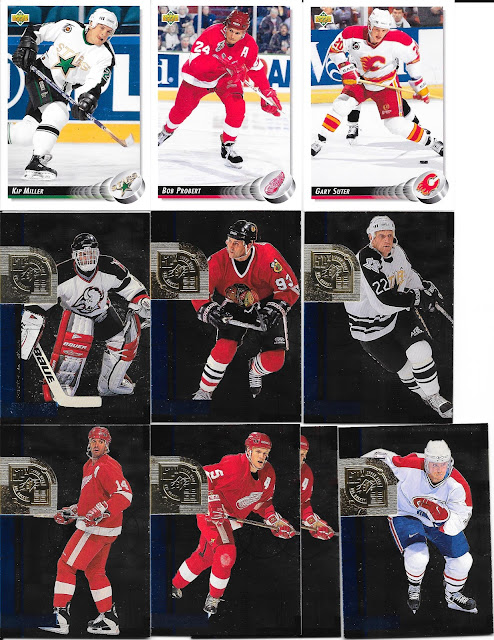 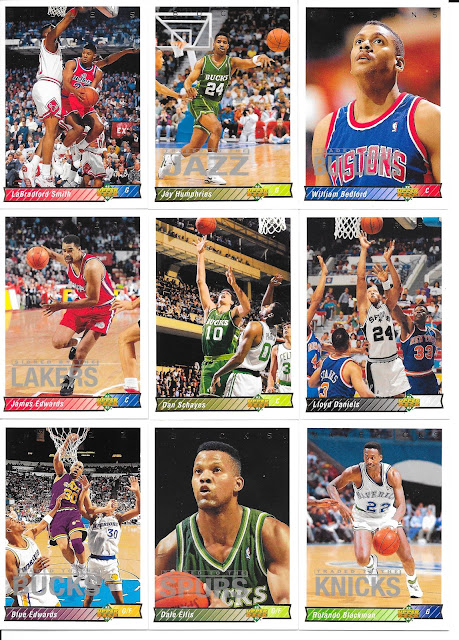 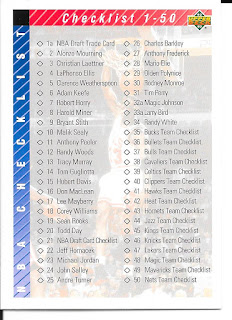 Have a great Canada Day to all my fellow Canucks! 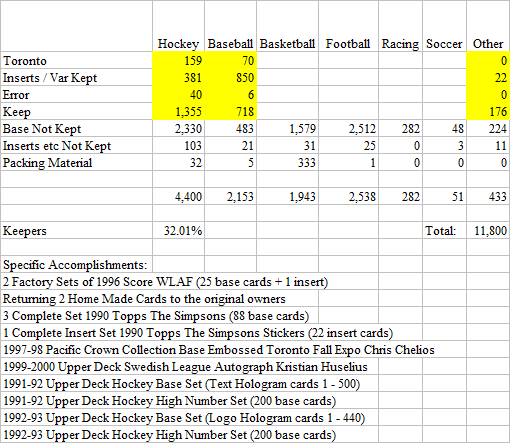 Let's end with a recent delivery from 401games. Funny enough, it was set out, delayed, went back to 401games who apologized for the issue, and sent it back out to be, after which I got it next day. The issue? Someone at Canada Post spilled coffee on the label of the box and could no longer scan or read where it was going. Good on 401games to call and let me know, and apologize even though it wasn't their fault.
My pick ups? 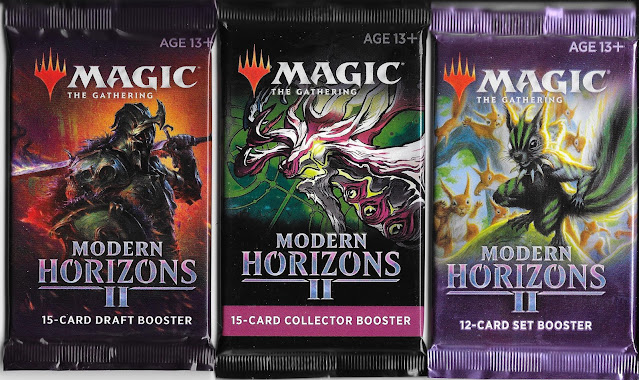 Had to get packs for the unopened pack collection - it does irk me how we have gone from me being able to get one pack for $5 to now needing to spend $50 on a release with one of the packs costing near $40 with the invention of the collector pack. Grrr....but on me anyway, I still buy them.
Singles from Magic years gone past... 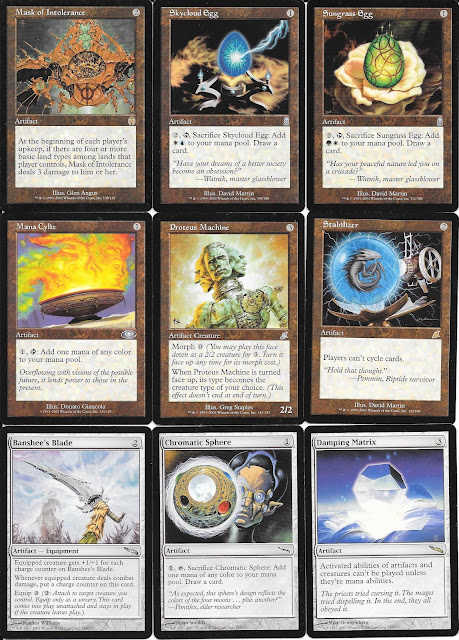 Nothing spectacular, but cards that fill many holes in sets. Still prefer the brown border and a bunch of early 2000 artifact cards. 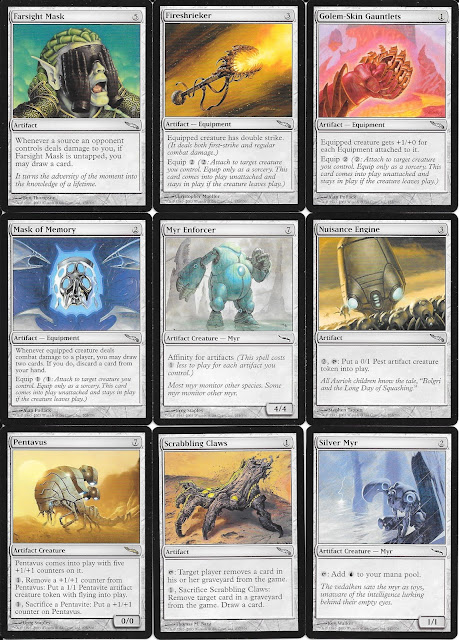 Mirrodin is, I believe the set with the biggest number of artifacts (though maybe Mystery Booster could, I'd have to double check that). With 91 cards now in my hands, I am still missing 46 from the set - more than a third of the base cards are artifacts. I guess it makes up for some sets not having any. 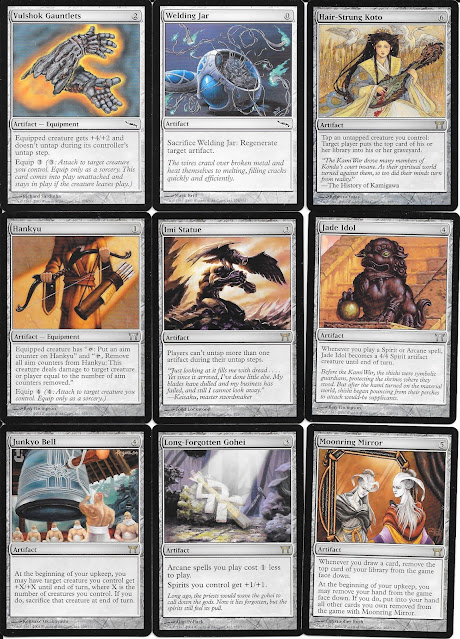 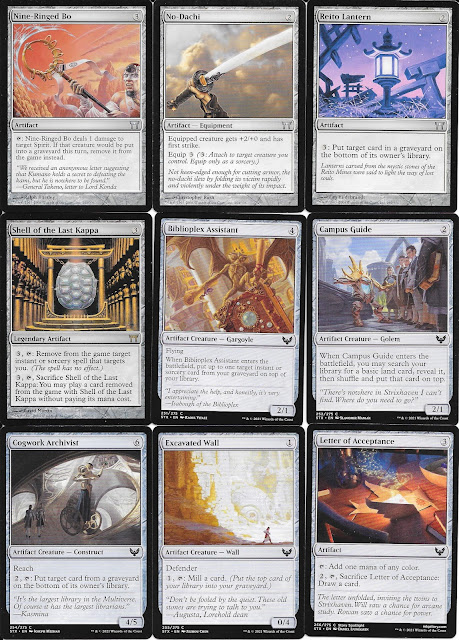 I picked up a bunch of cards from the Strixhaven new set, and Modern Horizons 2 just to knock some of them off early, and because a couple of the cards I do really like. 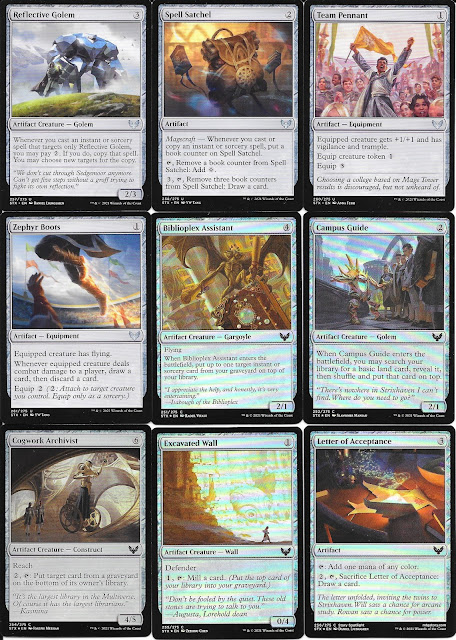 Yeah - the messing looking ones are "foil" versions. Not sure why they scan this way, but again, they are messing with how they foil the cards, so part of the effect I guess. 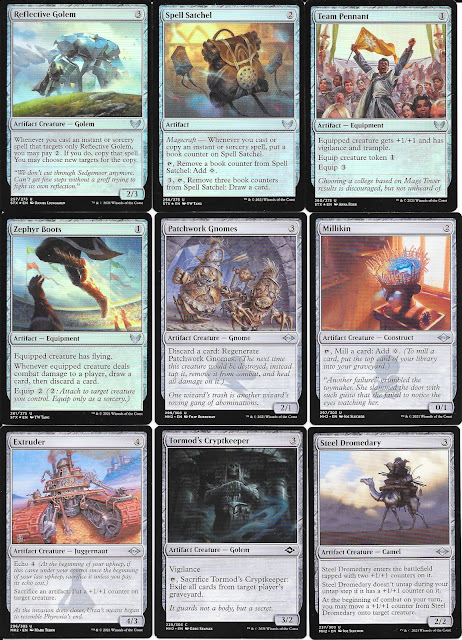 Patchwork Gnoes are great (I enjoy quirky cards like this), as well as Steel Dromedary which brings back the days of Clockwork like cards. 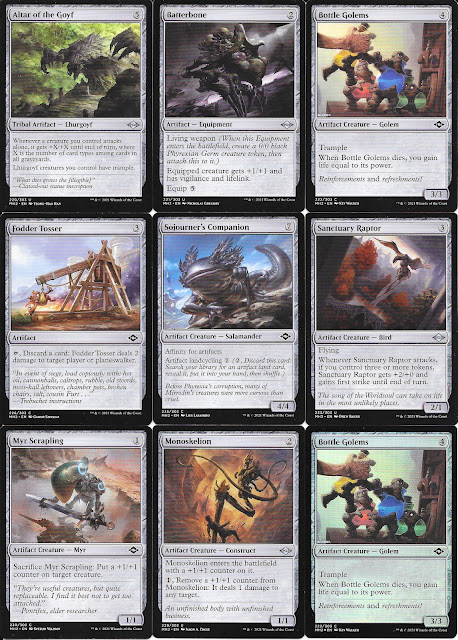 Bottle Golems being a take off on Bottle Gnomes does well, as does Fodder Tosser which is ALMOST as good as Fodder Cannon when it comes to flavour text. Almost.

A solid bunch to go with a few board games for the kids and with nothing damaged from the delay, all is good and well!
Posted by CrazieJoe at 8:00 AM