So, I ordered a few things from 401games a while ago including a WWE blaster box, some lots I will share later, and a catch up on some of the Magic The Gathering Packs I had been missing from recent releases, so just a quick share on those today. 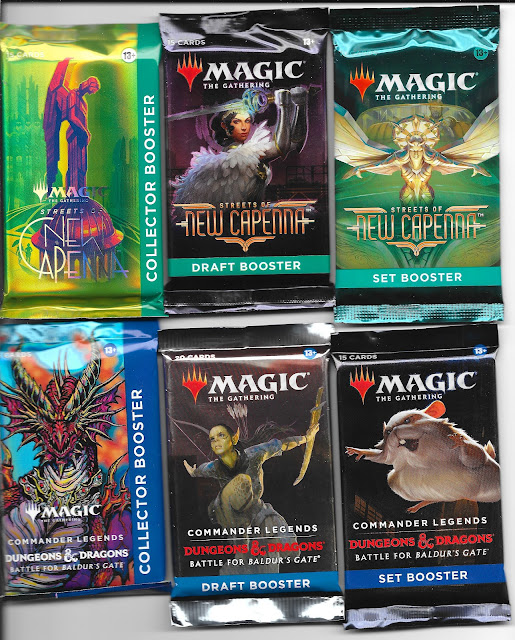 So, all in, just 6 packs and because of the "Collector's" packs - about $70-$80, which honestly, I find a big staggering, but still do it, though it does give me a bit of pause as to whether I should continue with the collector packs because they are $25 to $35 a pop.

What makes me question that even more is when they then release something like Double Masters 2022. The Collector boxes in it are all of 4 packs and the box is about $300 CDN. Yeah, so now I have to wonder if I want to spend $80 for a single pack to keep up with the collection, and I am balking at it. I mean, I have spent that on some of the Magic packs in my collection, but that was, for example, a handful of years ago when I bought a revised pack which is from 1994, for the same $80 (and it's now at least a few hundred dollars - so worth it).

Not sure it's really worth it on a brand new set/pack.

How much would you spend for a single pack of cards, or what is the most you ever spent on a single pack? I've shared mine here before - I have spent, I think at most $120 on a single pack for some of the older Magic packs I bought. The good news is, sealed, they are still worth more now, but if I ever open them, some of these could hold about $5 in card value....part of why I don't open them yet - too scared!