If only this card was a few years early.... 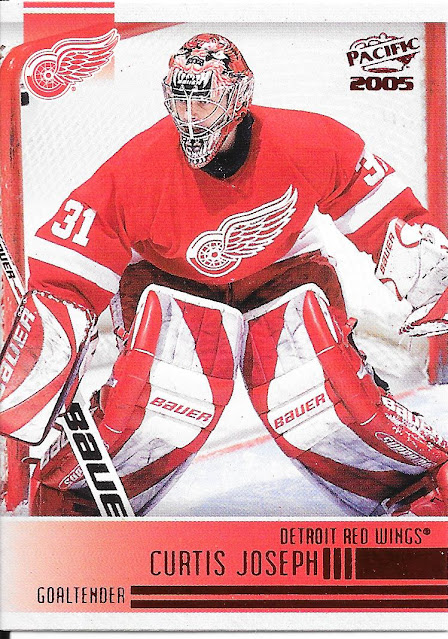 I enjoyed Cujo's stint in Toronto in 1998-2002. He was definitely a player I liked to watch play before that time, so glad I have some cards of him in the blue and white that I get to collect. Now, if this was a card from his Toronto days, and a blue parallel instead of red - it would be fabulous as I really like the pose.
It still works really well though with the red foil and Detroit red though. 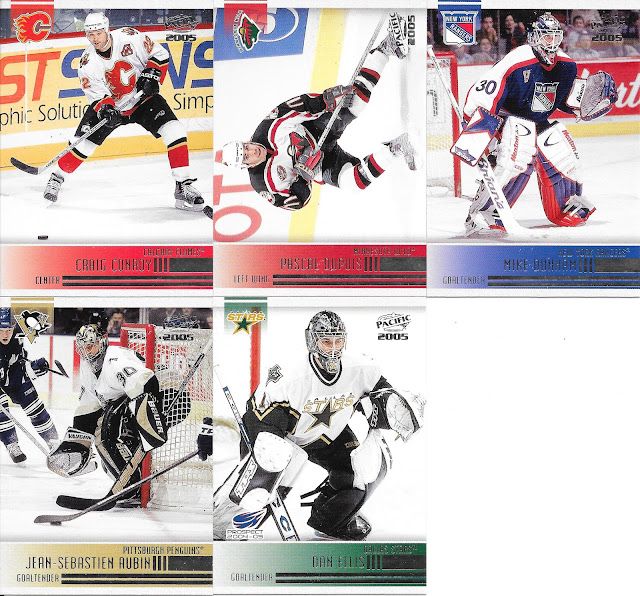 A bit of a goalie hot pack here with three more goalies in the base cards. 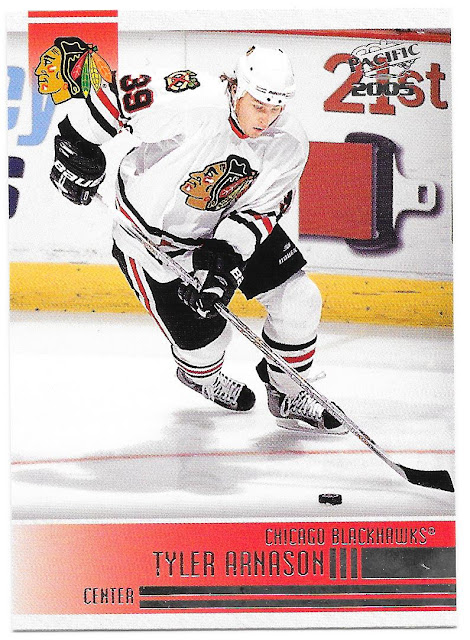 One dupe, but I can guess it was first in one of the jersey packs as the collation does seem to be bang on with all of the non-jersey packs. Funny how you are usually able to tell a bit how the packaging box process must work when going through one. Definitely seems like perfectly well collated for the packs, with jersey packs thrown in afterwards and likely to contain base card dupes.
I can live with it though as I should end up with over 2/3 of the 300 card base set after these last few packs.
31 Packs, 217 Cards, 1,238 Points.
On a completely separate note today, I wanted to share some cards Jeff Scott passed along my way by mail (I have sent along the Bruins I had collected, and they have been received with the next pile starting, though this one likely will wait until near year end before I send - just to make it more economical...unless we can do an in person meet when things are more manageable in the world). Also a thank you to those who had sent some stuff for me to include and pass along to him, it was appreciated.
Jeff passed along some great serial numbered cards, a few Jays, and some a few cards I will be looking to turn into Bruins cards (or Tony Gwynn whom he also collects). 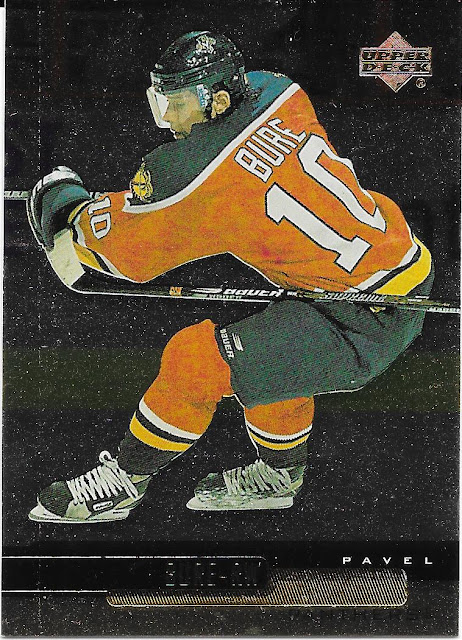 Though they don't do a good job scanning, the 1999-2000 Upper Deck Gold Reserve cards are nice in hand in their wonderful foil-ness. Here we have Pavel Bure who was a base need for me, and the only base card addition as Jeff focuses on the inserts and serial numbered cards... 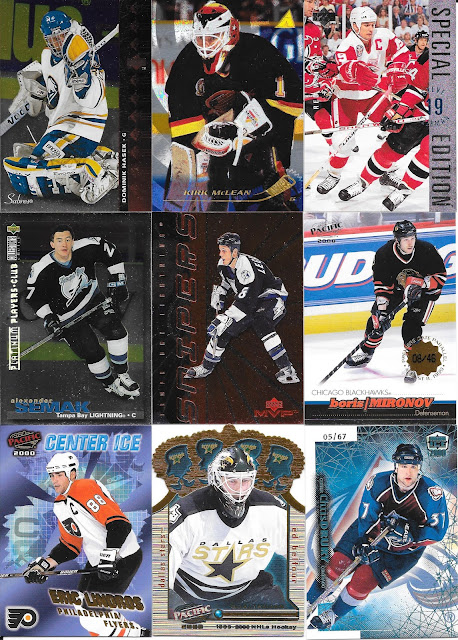 The foil look continues on these, and we get a bunch of Pacific inserts. I've said before, Pacific was ahead of its time when you consider the different insert sets in their products and what we have out now being similar.
From top row down, we have a SP insert, Artist Proof McLean and a Special Edition Yzerman, second row is highlighted by a 1999-2000 Pacific parallel SN to 46, and the last row has a couple inserts from that same set with Centre Ice and the Die Cut Crown - showing just how varied insert sets in the Pacific releases were at the time. Oh, and lastly a SN to 67 Drury. Fabulous cards. 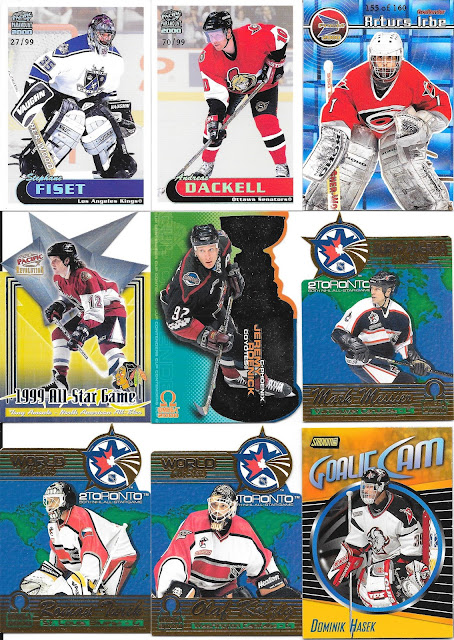 The Pacific continues with the next bunch which have a coupld of the SN 99 1999-2000 Pacific Paramount set parallels, an SN 160 Irbe and a bunch of die cut inserts from Revolution and Omega sets by Pacific - because they knew you had to have as many different sets out for a single company, why just have one?
The Dominik Hasek card is an interesting one as it is really a little leaflet as it opes up to have a two-card wide picture. I didn't open it, though probably could as it looks to be closed with a small semi-sticky spot but don't want to over bend the card to do so. 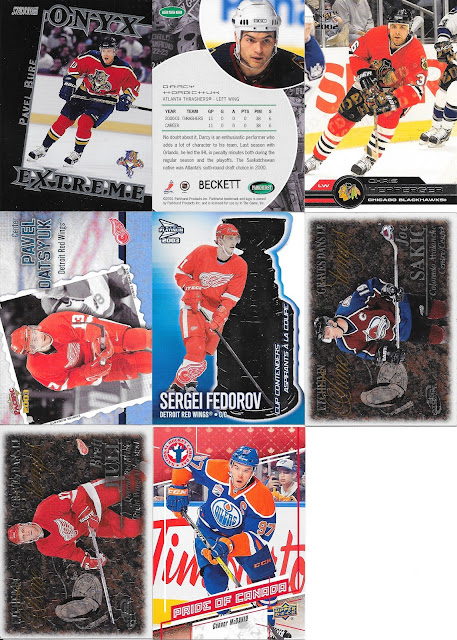 The last bunch includes another Stadium Club insert - Onyx from the same 1999-2000 release. I really like these Onyx cards as the black looks so sharp and they fell otherwise like acetate cards.
The 2001-2002 Parkhurst isn't your ordinary one as it is a Beckett promo version as per the Beckett stamp (which I figured I'd show by scanning the back of the card). Also interesting that the McDonald's 2002-03 design is almost exactly the same as the one a scan up, used 3 years earlier.
Oh, and did I mention the McDavid National Hockey Card Day card as it is a decent design too!
There were some Jays provided as well... 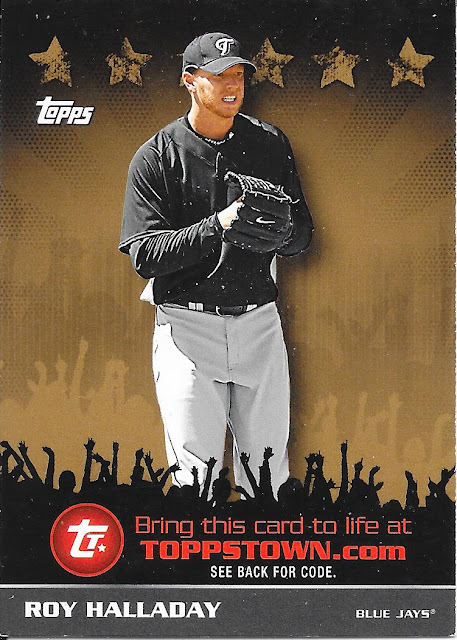 This gold version is the second of the two Jays in the set, so I now have a full gold version Toronto Blue Jays set (2 cards still counts!). 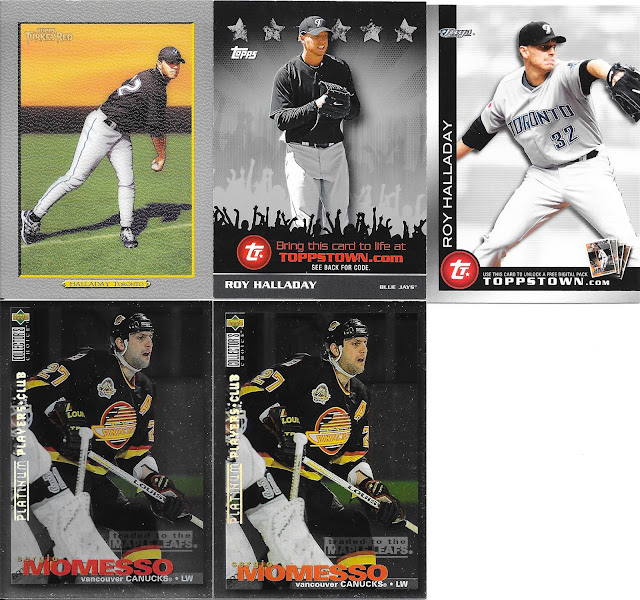 More Halladay! Made me wonder, though I don't player collect, which players show up most in my collection (and I assume the top are all Jays). These include all copies of cards, not unique/different cards, but my top 5 in baseball is:
Joe Carter - 272
Dave Stieb - 266
Kelly Gruber - 250
George Bell - 243
Roberto Alomar - 236
Roy is actually currently 28th, though everyone ahead of him were long time Jays as well. Actually, the first ranked player not to have played at all for Toronto is...Willie Stargell at number 31 thanks to the puzzle cards in the early 1990s, as I have a few of those complete.
I am assuming that the inking must have just been different between the two Momesso cards, but it looks clear here as being a red versus orange difference.
Heck, there were even a few cards for the error collection...

Of course with 1989 Donruss, there are 4 different versions for the card (think Inc versus Inc. and * denotes versus *denotes*), but this knocks off two of them. The Griffey is the error version with a typing error on the back.
There are a few I have now to also find a new home for... 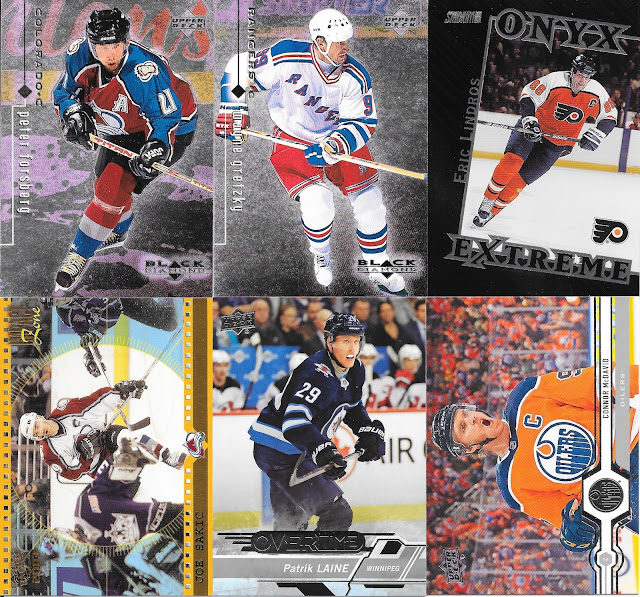 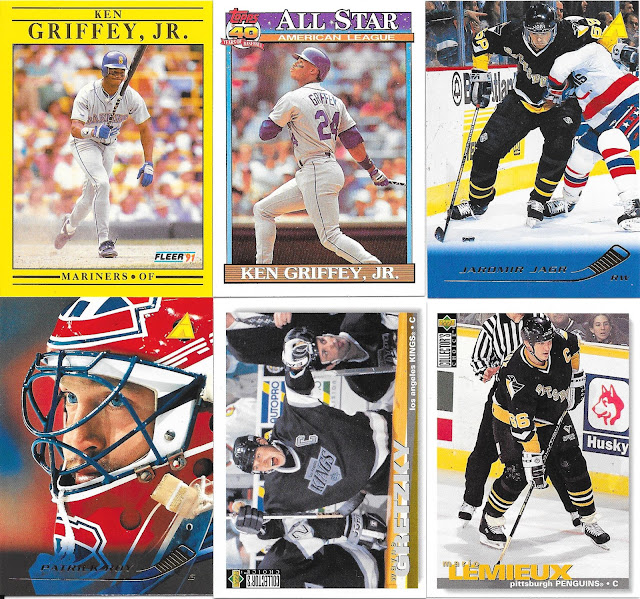 Just let me know if anything is of interest to anyone from that last bunch.
As always, a big thanks to Jeff for the surprise package which took all of a day between mailing and arriving at my door - now that's service!
Posted by CrazieJoe at 8:00 AM