I obviously haven't seen every set, and I don't collect basketball at all, but from the cards I have seen in lots, this set seems to be one of the worst for keeping condition of the cards in great condition.

It has to be something with the gloss because I have found the cards stick together very easily and that, especially on the fronts of the cards, you get little white specs as part of the colours, especially the name/team border, chip off.

Today we have a chunk of the set and instead of splitting it up, just going to highlight the set a bit. There were another 70 or so cards which I would consider damaged enough I wouldn't trade but will give away - or what I call packing material in my summary. 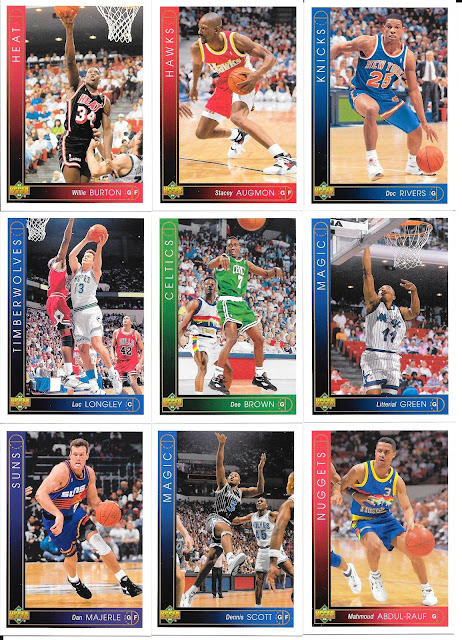 It's a shame because this is a very nice looking set. Definitely looks like an Upper Deck basketball set, but the team colour border accents the set up nicely. 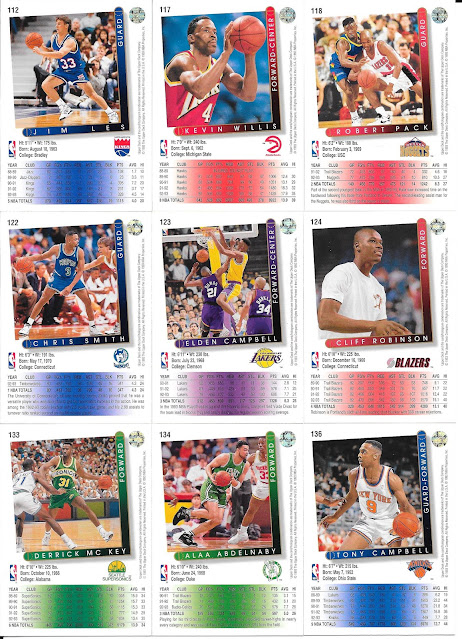 The backs are alright, though without full stats or any write up, they are less squished, but do feature a second photo. A solid design, though not accenting my personal preference of info for the back. Team colour accenting is really nice though. 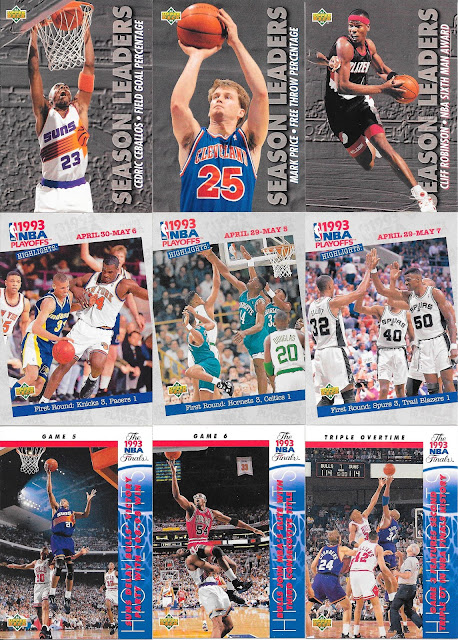 A few subsets from the set include season leaders (always a good choice), and as basketball seems to do in a number of sets, playoff game highlights and summaries.
I am a bit surprised that there are any Chicago Bulls cards here as the star cards (ie, anything Jordan), seem gone from these cards or the lot in general, but I guess, unless he was in the photo, no need to pull those out here. 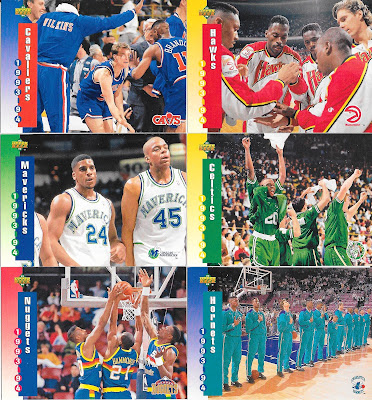 This subset is an interesting one as you get a team card that isn't a team checklist, but instead is a schedule summary for the 1993-94 season. Definitely a new one on me as I haven't seen a subset like that before.

Overall, a solid set, just a shame they don't seem to age well. I'd be scared to get a factory set as I would worry these would probably brick heavily causing significant damage to many of the cards. Maybe I am wrong... 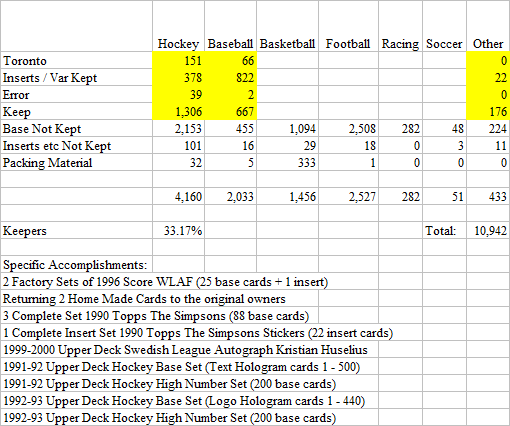 Guess I should get to the package too huh?
I received a nice package from everyone's favourite online dime box - www.baseballcardstore.ca which touched on a few different things in my collection. As an aside, the website has been continuing to improve with more options and better searching ability (which is difficult to improve to begin with, but is getting a lot easier and more manageable which is awesome), as well as some great additional purchase options such as some unopened packs, and some random card packs they put together.
Very coll.
Speaking of cool, here's what arrived.... 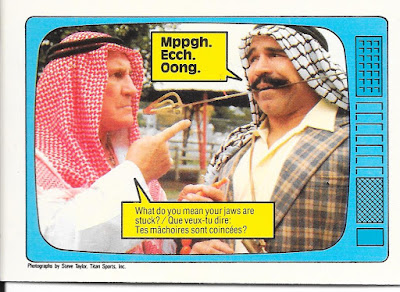 Regrets is probably a strong word, but I did have some 1985 O Pee Chee wrestling cards which disappeared when I was an early teen - may have been sold at a garage sale, I don't remember. I wish I had them still, but I don't, so it was nice to get one back. I think this is the first card from that original set getting back. At least it's not a huge set, but probably not the easiest to find and cobble together. 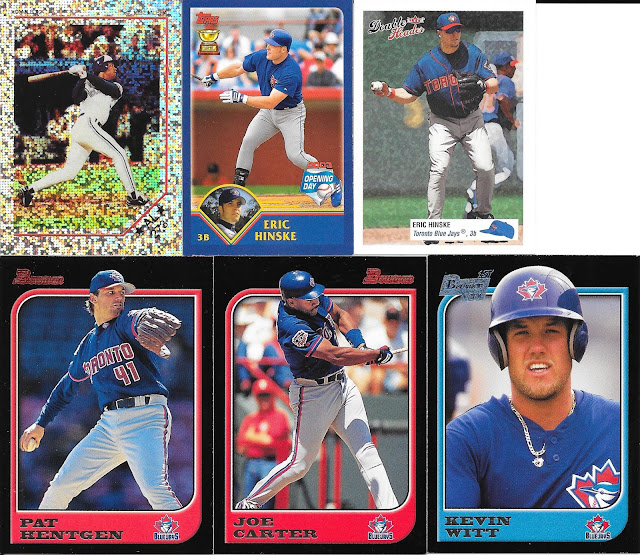 A few Blue Jays as well, some smaller sized cards and Bowman. Love me some sparkling stickers! 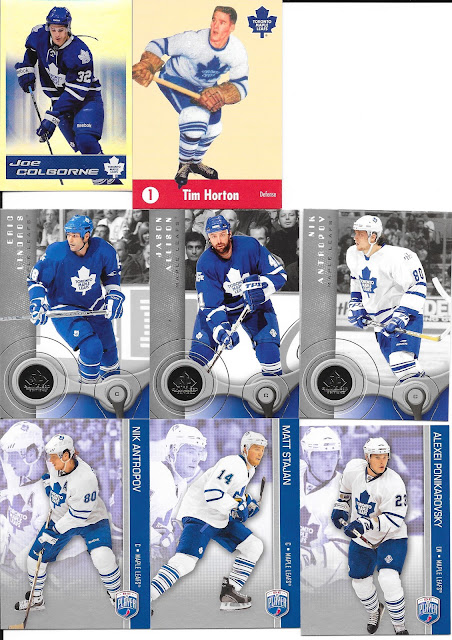 The majority of the cards were Leaf helpers - awesome - including the Horton Parkhurst point redemption card - very nice, and some "I will collect them as they are Leaf cards, but never a big fan of the Be A Player sets" cards. 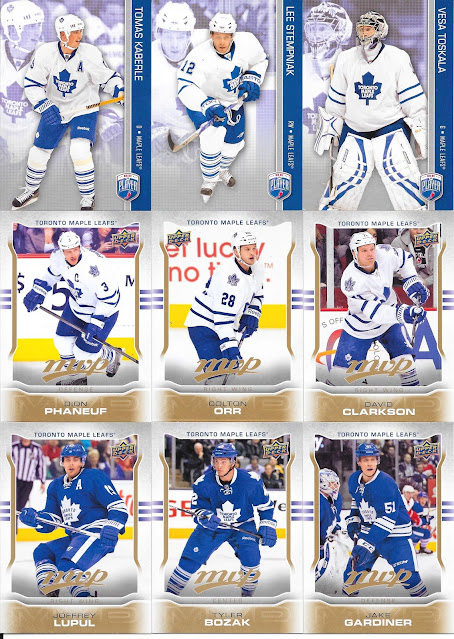 The MVP sets I can get behind. Sure they are "lower end" product, but have been solid for the last decade. 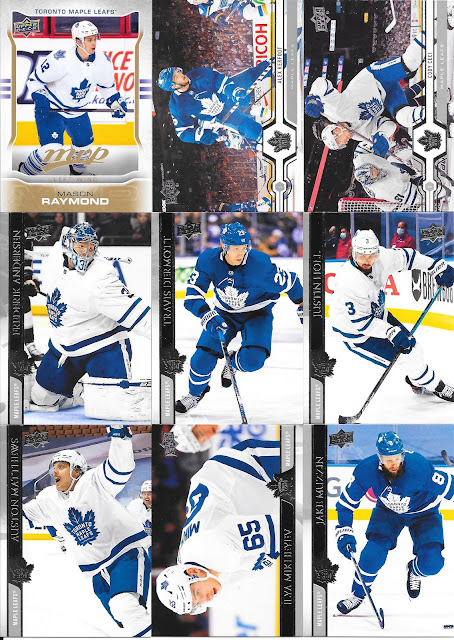 Yeah, more recent Leaf cards - I don't even bother with updating my TCDB want list for the current year or two. There are so many earlier cards on my want lists, I am not even focusing on current stuff. If it's from the last 203 years, I just tell people to assume I don't have it and will gladly accept in a trade. Since I keep dupes also, it's not an issue for me at all.
Always happy with new Auston cards. I took a look, and I don't have a rookie card of his, but do have 31 cards so far - not bad, though he has about 2,000 cards out already.
I thought that number was a lot, but figured if he was in baseball it would be more so I looked at Vladdy Jr, who already has about 5,400 cards (stats per TCDB). Wow.

Ooooh - the Limited Morgan is nice and those are one per 6 packs, so not serial numbered, but nice. 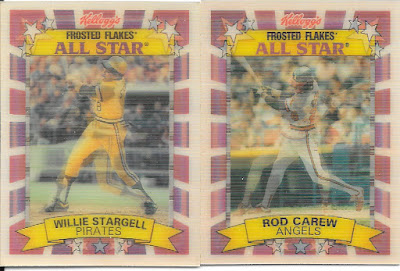 I miss cards in cereal cards. Why can't we get that again? These couple from the early 90s have held up really well and will gladly add to my collection. 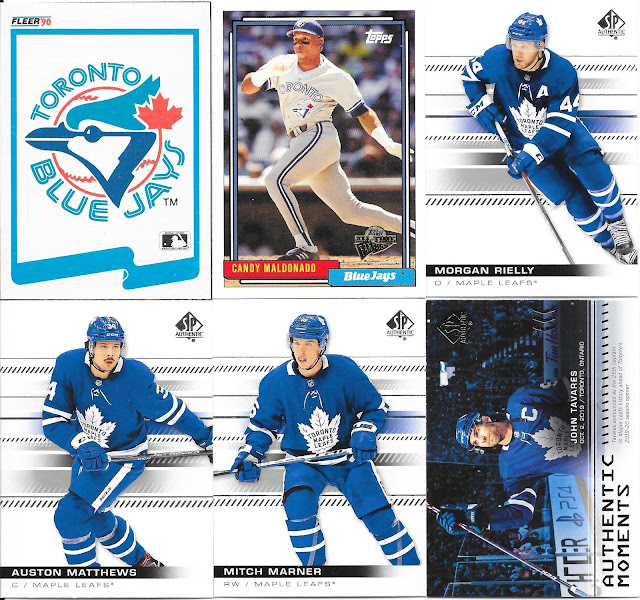 Here we have "complete" team set cards. SUre, the 1990 Fleer is the only card as a box bottom, and same for Candy being the only Jay in the Fan Favourite set, but that's fine. As for the SP Authentic - I have the one other "pure" base Leaf, and as much as I thought the authentic moment card was an insert, just a subset card, but still very nice.
Oh, but there were still a couple more... 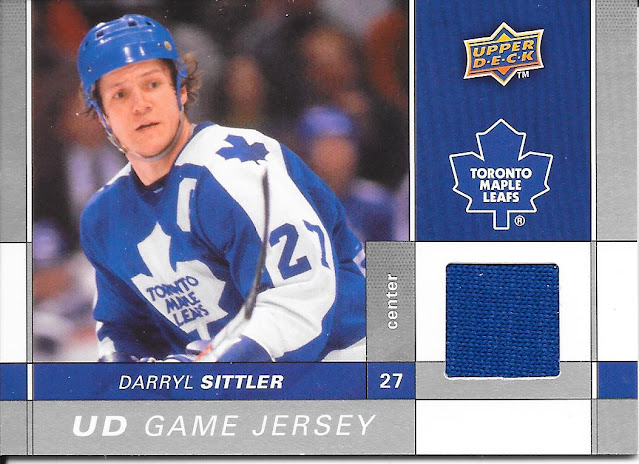 Wowzers! Now, to be fair, the back does say from an "event" rather than a game, but that doesn't bother me at all, this is still a SIttler Jersey card - sweet!
Last, but not least, probably one of my top 5 favourite error cards in my collection, and actually another one also has Andre Dawson... 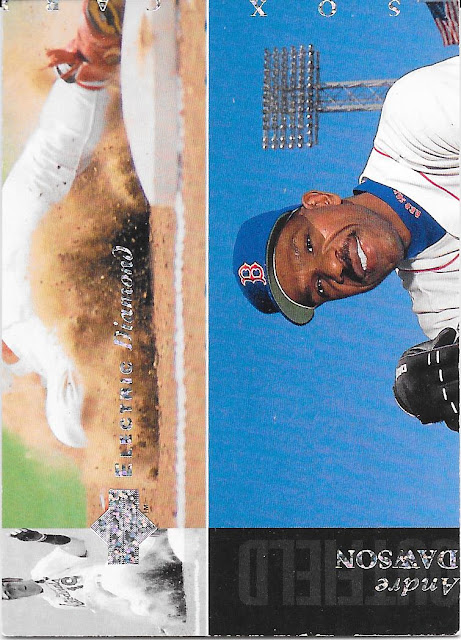 Yeah, just slightly miscut. Like, almost half and half between Andre and Tom Pagnozzi on card 106. I really enjoy these weird misprints, though I don't go out of my way to find them.
Posted by CrazieJoe at 8:00 AM