Today we start another Dave and Adam's pick up... 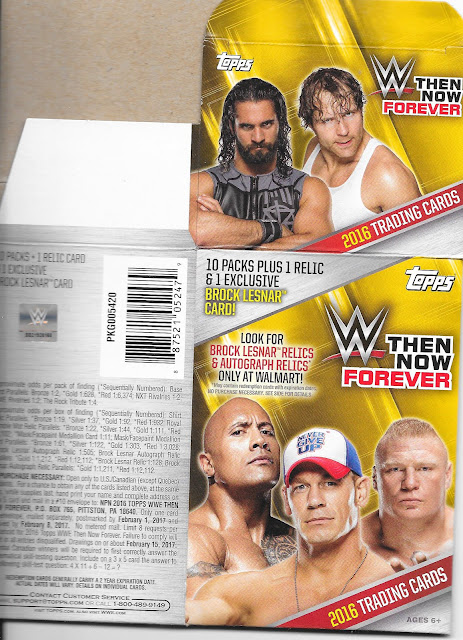 There will be plenty of wrestling this year I think. So, I was thinking, because of my scoring...

There is a bit of a disadvantage to wrestling, and I am not sure how, or if I need to bother adjusting...it is my system after all. My leaning is towards leaving the scoring as is (so there is no "Toronto" bonus for anything), except I will bump the new base card score to 3 instead of 2 (and equally, no insert would score less than a three). I think this better reflects that, there are few new wrestling cards, I wouldn't be happy in getting whereas, there are definitely a bunch of hockey (Montreal cards for example) and baseball cards (Yankees for example) that I really don't care much about getting.

I think this should be a fair trade off - or at least reflects fair to me and my feel for collecting the different sports right now.

So, as suual, we skim off new packs from the box first... 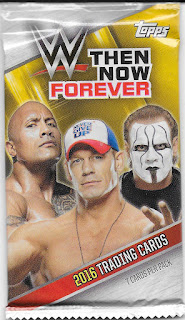 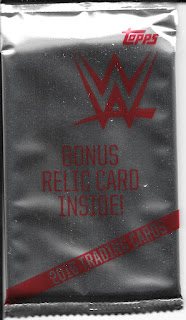 This will give a good advantage to the second boc I picked up because, having a relic opened, given the odds on the next one, should mean a good chance to beat this box...but first, have to see how this box does...

Oh and, if this whole scoring thing adds nothing to you as a reader - just ignore my ramblings about trying to justify the purchases of boxes and good versus bad - just enjoy the showing of cardboard..I think that, we can all do! :) 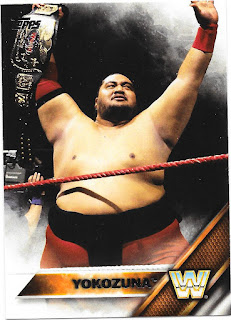 The standard Topps 2016 design on the base cards which is fine. I could have done without the foil name - the foil just doesn't work well to stand out, too dark. That said, we start of with one of the biggest men ever to wrestle with Yokozuna. A former champion and known for losing to Hogan on his return to WWE back at Wrestlemania 9 - Yokozuna had the belt for about 90 seconds. 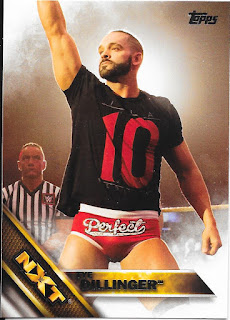 I had to figure out this was an insert set for NXT Rookies, and Tye was card number...15? I get the numbering is alphabetical, but make an exception man! 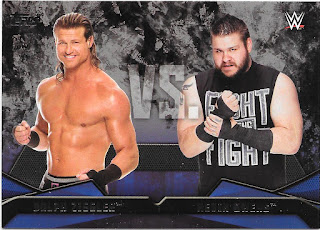 Here is a perfect example of the foil problem. A WWE Rivalries insert, and the names are very hard to see. Thanksfully, we all know Chris Jericho and Kevin Owens. 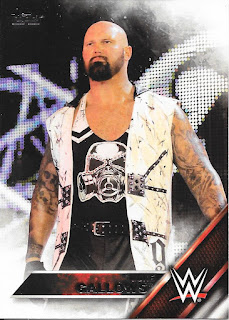 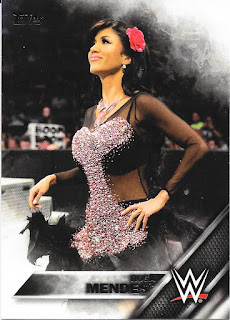 I can't believe how long Rosa Mendes was around WWE - about a decade - for what little she really did on camera. No offense, I would take the job in a minute to be in WWE, but I don't think her career turned out the way she thought originally. 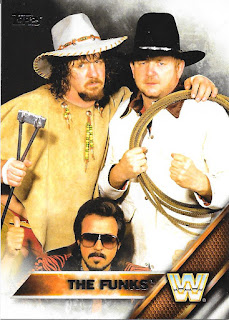 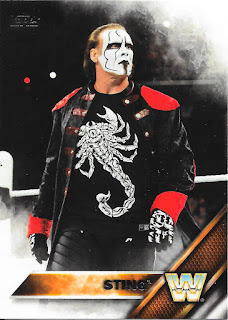 We finish with a couple more legends cards with the Funks and Sting. Even this card makes mention that Sting's WWE run fell short and that the WWE Universe didn't get to see much of the man called Sting. He could still rock a menacing look though.

1 pack, 7 cards, 21 points (both inserts are every other pack, so 3 point minimum since I needed them both).

A separate share today...401games was have 20% off singles not too long ago, so I placed an order for some Magic cards and just picked it up the other day. Generally, a bunch of new to me versions/editions of artifact cards from a handful of sets that were very underrepresented in my collection previously. 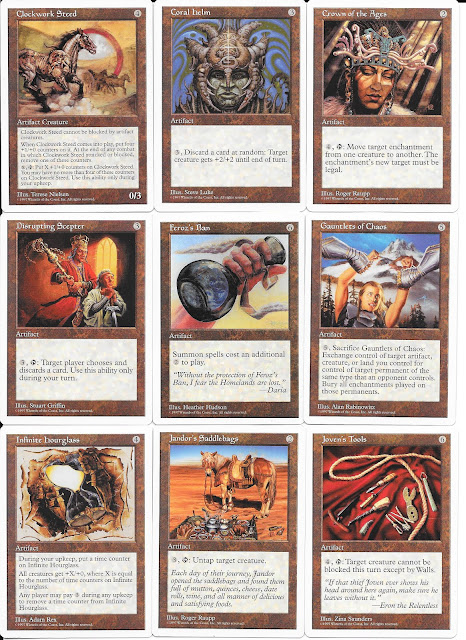 Not sure how I missed having so many 5th edition cards since I was still playing at the time. Might have been because I was playing and not collecting, and since many weren't useful, I didn't bother chasing them down back then. 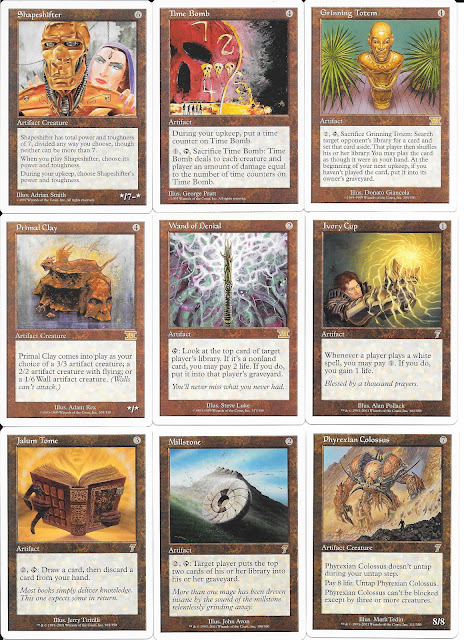 We move to Classic or Sixth Edition and onto 7th. The significance of the "editions" is that these are the big set releases. Essentially what happens now is one base set a year with a few expansion sets, which are smaller, around it. These old editions were the base sets back in the day. Now you get core sets, but same thing.

Not that they are more expensive in some cases, but rare cards are harder to find and symbolized starting in sixth edition with the symbol mid-right of the card, being gold in colour. As it so happened, over 30 of the cards in this bunch happen to be rares. Didn't do it on purpose, but makes sense those would be more likely to be missing from the collection I have. 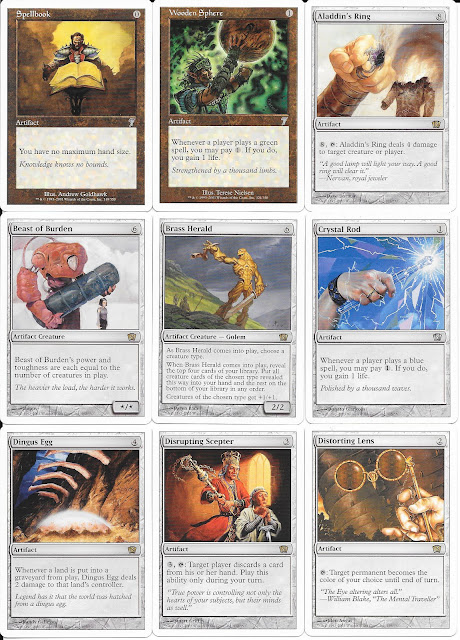 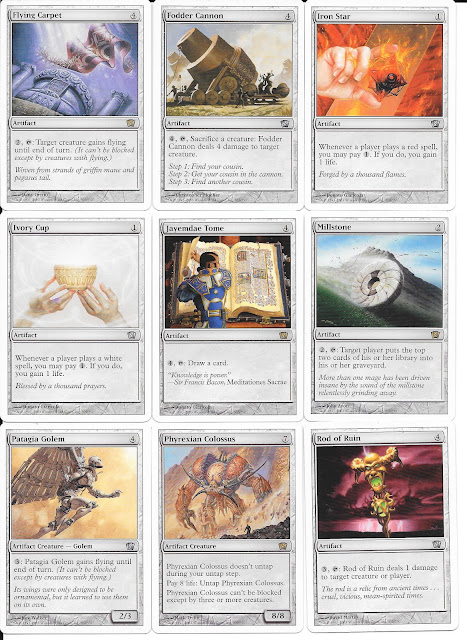 One of my favourites - Fodder Cannon - different picture in this set, but luckily, same flavour text. 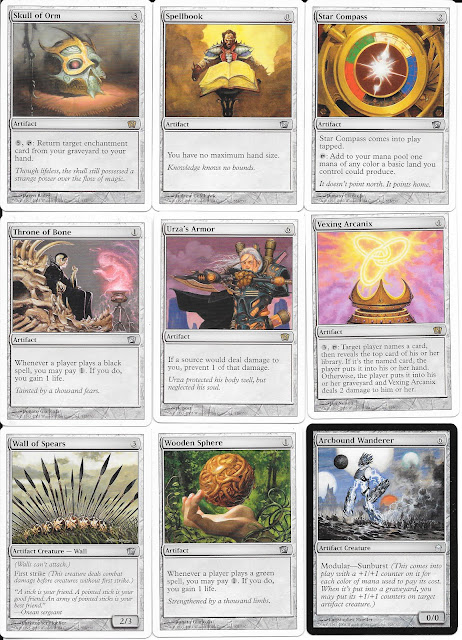 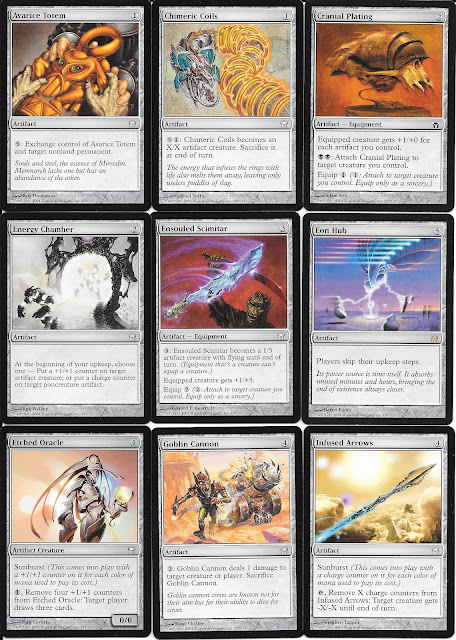 Not all the cards have new pictures, such as Wooden Sphere, but many of them. 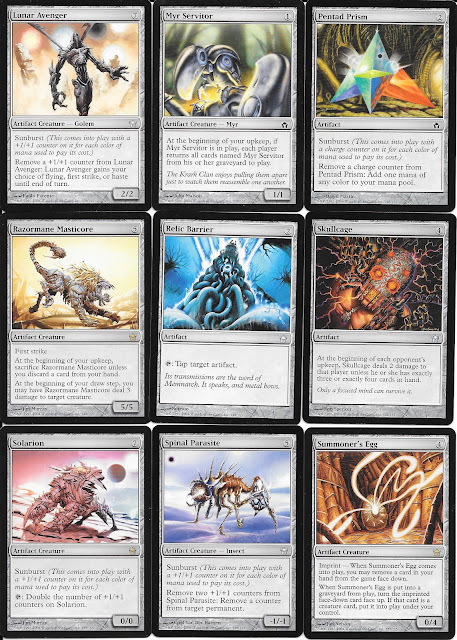 Solarion is an interesting card. Doesn't work in a colourless mana artifact deck, but for a multicoloured deck, could be an interesting add. Lots of mana to cast, but a doubling effect if not taken out quickly by opponents. 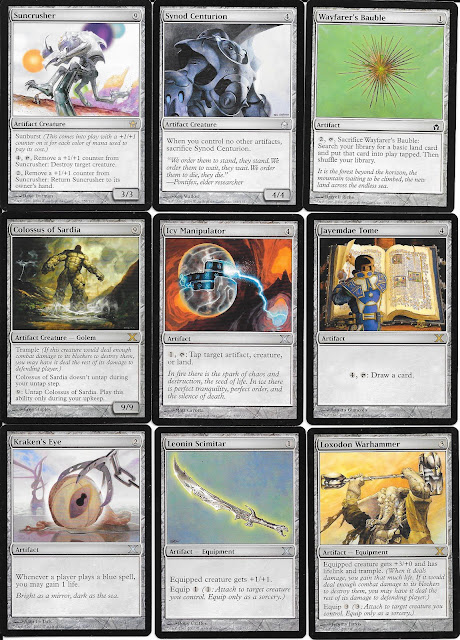 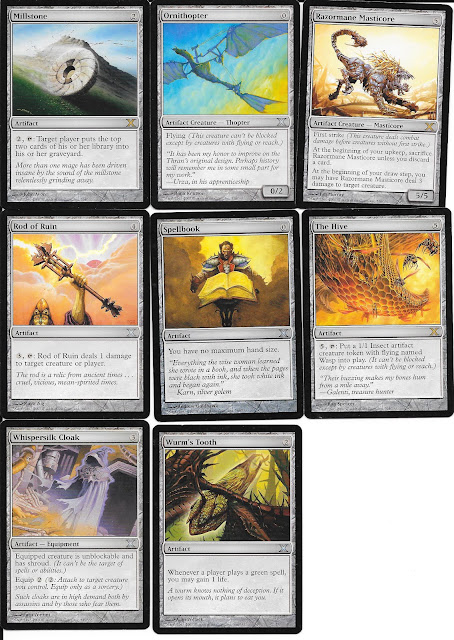 A great bunch of cards for the artifacts collection. I should take a look at what is left realistically - maybe another 500? 1000? I dunno. There will be some I can't afford and won't want to afford, but probably still plenty of cheap ones I can find and add.
Posted by CrazieJoe at 8:00 AM