I know, most will think that the title has to do with a certain Billy Ripken baseball card (I am still looking for a copy of it for myself by the way), but in fact it has to do with what I said to my cat first thing this morning when I got to the basement where my cards are kept.

I have been putting off (well, I have just had other things to share really) getting to any of the cards I picked up while I was in the US last August, and they were all nicely stored at my desk, behind my computer monitors.

Our cat decided it was a good idea to jump onto the desk (which he rarely does, but gives me good reason to ensure no stacks of cards are left out), and nose around the boxes. The issue was, the dollar store 30 card packs of baseball cards because our cat enjoys chewing plastic. So I have two packages with some nice cat teeth dents in a card or two.

As far as mishaps go, it ended up being quite tame and not a big deal (I mean, a couple cards at a penny or two each...meh...), but when I saw the few things knocked over, I was expecting worse.

Not the ideal way to start a new year, but this is....I have a plan! I had success with the goal last year for trading away 5,000 cards - final tally is actually 5,779 - so I wanted to set a few goals this year as well to see if I can have more directed success.

As I like to draw out showing and sharing here, I did a quick count and between all the D&A stuff I picked up and the couple other items on the same trip, I have about 160-170 packs for opening. Well, I think that is what I will be doing the first half of this year, while sprinkling in trades and what not, but gives me some direction for basically January through June.

Let's call that Goal 1 for this year - because I know it will happen and I will get through it all, and we all like reaching goals.

Now, in keeping things manageable, I want to stick to three goals - no more, no less. Since the trade away goal was such a success, I wanted to set a similar goal for this year. Given I have a couple other goals, I will keep it again to the same number.

Lastly, I want to tie up some loose ends and complete some sets that have been sitting for a while. I started doing a bit of this later last year, but I want to give myself a goal regarding completing sets. I debated just having a goal on the number of sets to complete, but I thought it would be more successful if I pick certain sets and work to get them done, so without further ado, I list below the sets I want to complete this year (as well as a "where they stand" figure).

Goal 3 - Complete 10 sets
I don't know which or what, but if I have a goal (maybe not set in stone as to what sets...but still), might be able to reach it. I do have a few sets which are only a dozen cards off or less, so 10 sounds like a decent stretch goal.

For those of you still with me....CARDS!

So, if I am going to complete goal number one, I guess I need to start breaking into the Dave & Adam boxes that I got. So let's start with this one... 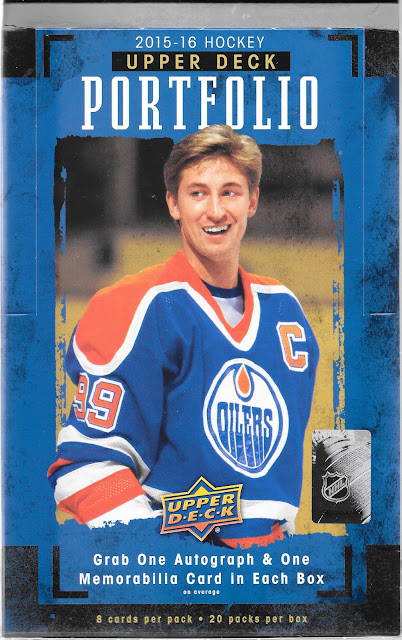 I haven't seen these before, and the box was on sale for less than half price, so I figured it would be an interesting box to break, and I should get an auto and a memorabilia card out of the deal along with a few Leaf cards. With 20 packs, I will take one to keep, and will need to know the odds so we have this... 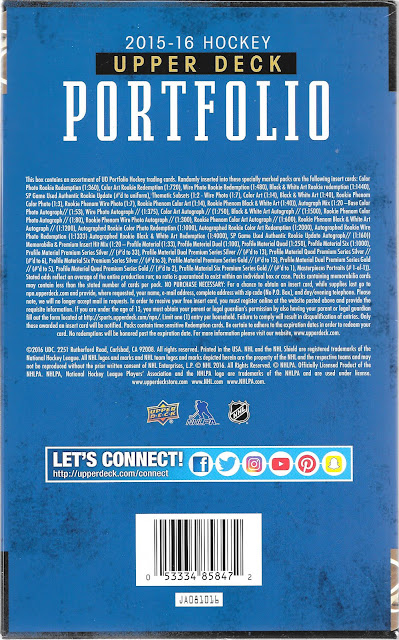 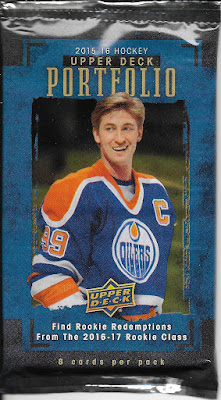 As far as pack design goes, pretty good cover pic - I mean, no messing around when you have Gretzky on the box and on the packs. Without having looked at the cards at all yet, makes one figure the set will have some cards highlighting stars of the past in some design.

Also, obvious with the portfolio set name, I assume these will be more like baseball Studio set pics, though maybe as close ups of game poses or the like.

Also, I only have two cards from the set at this point, so I expect that everything will be new in this box.

Best to show some cards now so today, we have pack number 1... 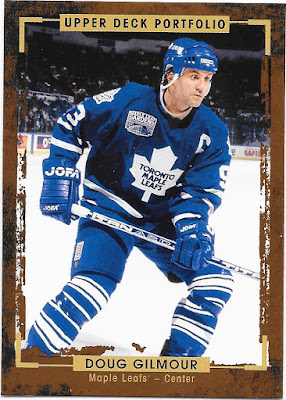 Wow - no joking, the first card in the first pack, and I get a Doug Gilmour. I hope this is a sign of things to come, but a great start regardless.

The design in pretty nice, a good close up and a border that doesn't take away from the front design. 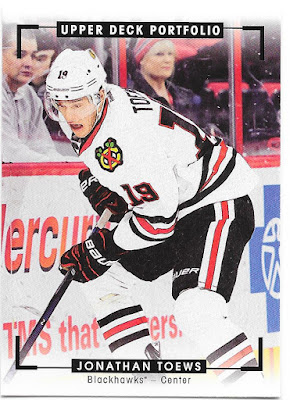 This is a Color Art subset card - one in two packs have a subset card, one in fourteen are Color Art cards. Kinfa like short prints I guess, but knowing the odds a bit more.

Okay, so here brings up a question - what do we do with these insert like base cards. So if I read the back of the box right, every other pack has a card from the - subsets in the base set. The pure base set is 200 cards, the last 140 cards are subsets which have pull odds. Since I am going to go with the base set being the pure 200 card set - the I will go with the pull odds for each subset for points purposes. 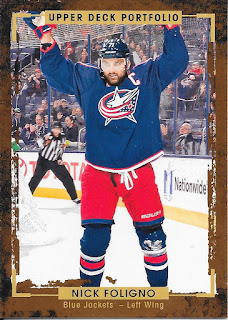 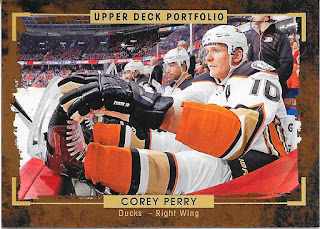 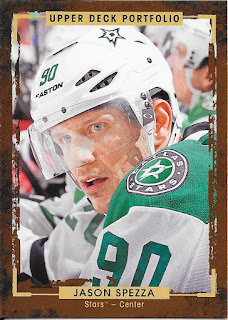 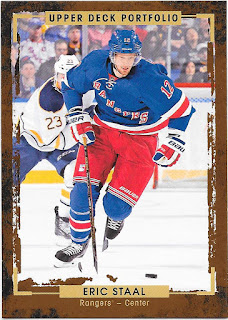 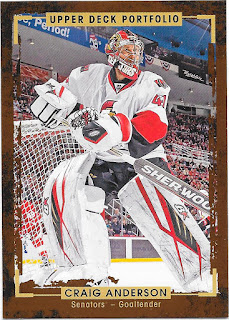 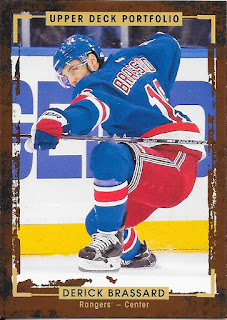 Okay, I am hooked on the look and design, and I am only one pack in. These remind me a lot of Masterpieces sets - not quite as good as it comes to card stock, but love the photos.

One pack in, 8 cards and 31 points - really happy about the Gilmour pick up too.

If you want to see more - 18 packs left to open so will see a lot of it over the next couple weeks.

Also, for anyone who has still stuck around to the end of this post, rather than send our packages for Christmas, I spent the time getting some packages ready for sending in early January. Mostly to friends on TCDB website, and I thought it was a good way to keep the holidays going, as well as get a kick start on getting rid of trade bait cards this year. My deal was, I went through and it was for people that share their mailing address with friends (so lazy me, wouldn't have to double check addresses, etc), and then depending on what I had from want lists.

With those being sent out - knocks 228 cards off for being sent out. Just a quick shot to start in trying to move another 5k this year. With postage prices increasing again, may need to do some Kijiji selling to move some...
Posted by CrazieJoe at 8:00 AM