So last year, I shared some of my thoughts, I figure this year - go big or go home - let's share it all.

So a week ago, O send an email to my brother and cousin who come over and watch with me. We place small bets ($75 total pot) and each individually come up with who we think is going to win, whether it will be by pin or "other" and the time for the match bell to bell in case a tie breaker is needed. For the rumble, closest to each slot for an entrant wins (so if Bayley is out first, whoever had her closest to the first spot wins the bet).

Deal was we would be done and emailed by end of Wednesday - so no late dirtsheet reading to hedge bets.

Below is what we each came up with...though I have removed names for now (so I can take credit for the best one later...just kidding).


Yeah - 5 of the singles matches we called exactly the same with the times only being a few minutes abart on each. That's why we need the time tie break. Doesn't mean any of them are correct, but at least it means those matches will just come down to how long the match takes.

As for the rumbles, a little more all over the place, but some consistency in both Drew McInture and Becky Lynch expected to do well by us all.

Will I come to be embarrassed by how far off I am on the above, or will it be so bang on that I will gloat about it repeatedly....I don't know yet, but I do know, win, lose or draw, the three of us have a blast doing it and it's a fun time - also, no one ever leave ahead or behind more than $5 usually - so no harm done to the wallet either.

I guess I should have some cards posted here as well, so let's post some cards that came in so far from a trade (on TCDB of course). I am waiting for the last package, but here are the first two PWEs in my trade with mrmike... 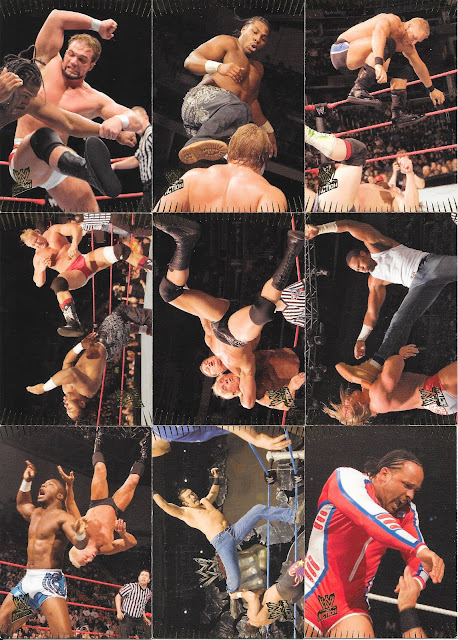 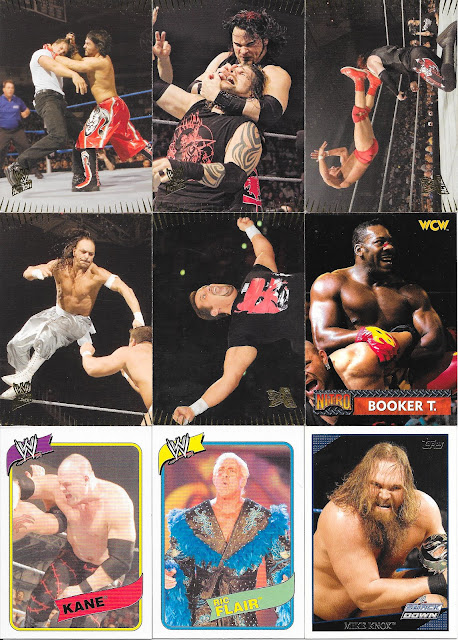 Some older sets pre the Booket T, and newer Topps base sets after. A nice variety and all needs, so some nice fits to the growing collection - closing in on 2,000 cards in the collection, from about 100 a year ago, so not too bad.
Posted by CrazieJoe at 5:00 PM