These are the hard cards to sometimes get for a team collection. Though not as bad as a "traded to" that pictures a player in a Leaf uniform, but includes him in the team he was traded to as far as checklists go, this is a close second. 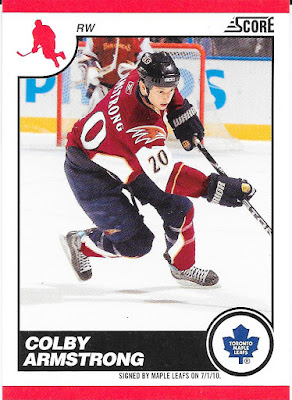 Colby was obviously with the Thrashers and traded in time for the card to note he is with the Leafs, but they don't have a picture with him in a Leaf uni so - instead of airbrushing a Leaf uniform on him (thank goodness that wasn't done), you get a non-Leaf jersey pose going into the Leaf binders.

I can live with that.

I can also live with this... 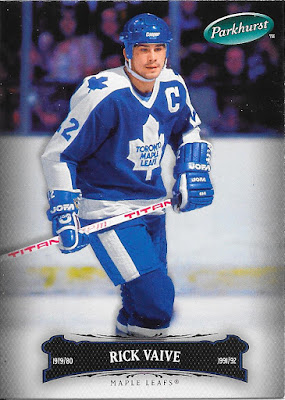 A new to the collection add from a set I really like!

The other keepers today, both from 2010 Topps baseball, which is fairly low on the collecting list, but still hanging on to these... 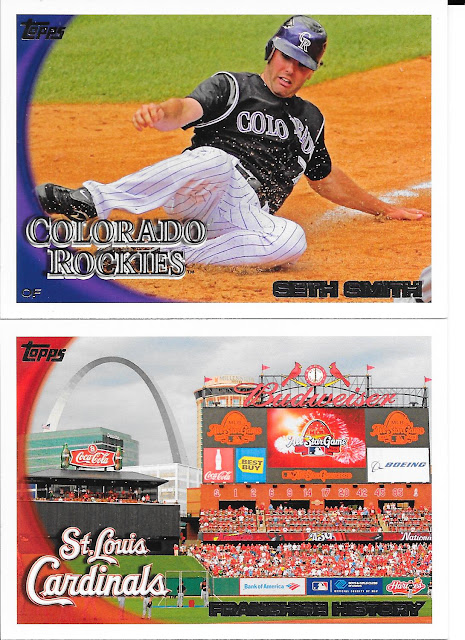 One big plus for the 2010 Topps set are the franchise history subset cards in the base - very well pictured cards - really like them.

Up for grabs to whoever wants... 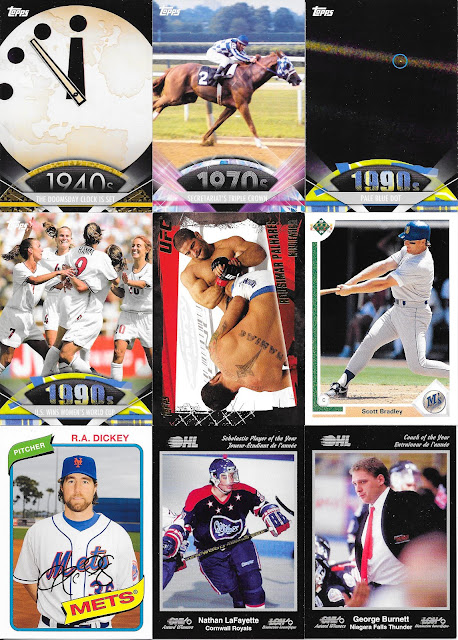 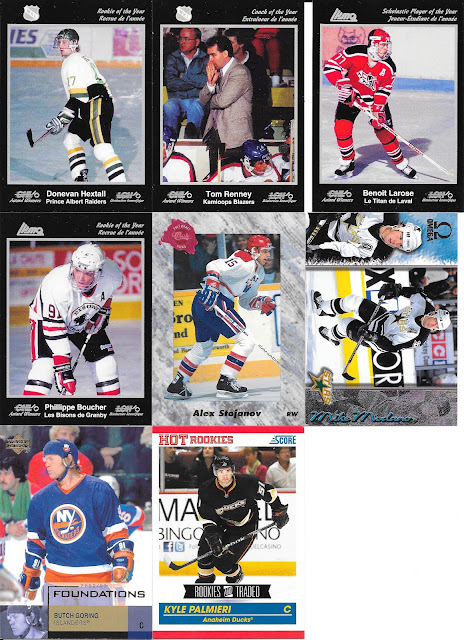 More American Pie and CHL Award set cards...check...the UFC card is a gold parallel, which also happen to be as thick as relic cards.

The RA Dickey 2012 Topps Archives is pretty nice too. The card stock isn't nearly as nice as the card stock it pretends to be, but aside from that, always have to enjoy the nod to good designs such as the 1980 Topps set.

Also to share today, some more cards sent my way by baseballcardstoreca at TCDB. I'll also share the link for the store (I haven't ordered from since we have done a couple trades, there hasn't been a need....yes.... www.baseballcardstore.ca  - simple enough concept - a quarter a card for any card.

SO what did I get in those cards? Well, the winner to me were these... 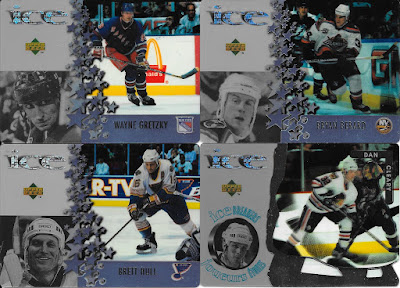 These are the last 4 cards I needed to complete the 1997-98 Upper Deck McDonald's base set, well I have the base 40 and the checklist. This is a set I had no cards from about a year ago, and no real intent to finish quickly, but really, through the wonderful people I have met through the blog and TCDB community - poof! 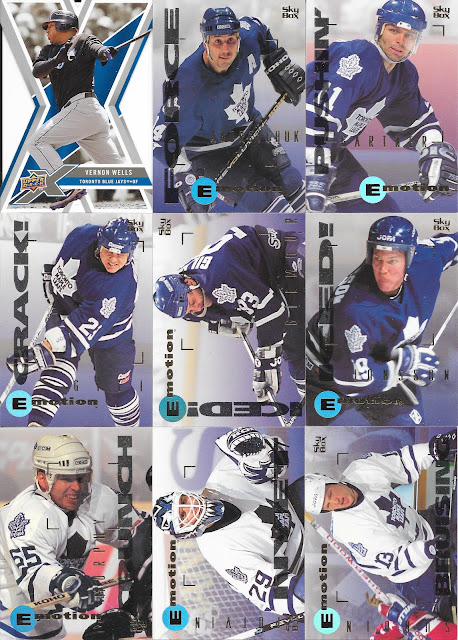 These represent two completed Toronto sets. The Vernon is the second of 2 die cut cards out of the Upper Deck X set (so small, but still completed from a Jays team perspective).

The E-Motion set, I hadn't heard of before these cards (crica 1995-96). We have all 8 base Leaf cards here so, one and done in a single package! The card stock is nice and thick, and the fronts are okay but very mid-90s with some graphic stuff going on and not a true background. 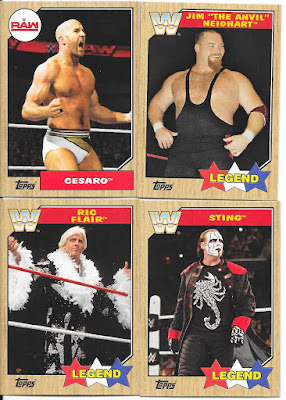 The package included a few wrestling cards and WWE Heritage of any year are welcome additions as I have very little from those sets. 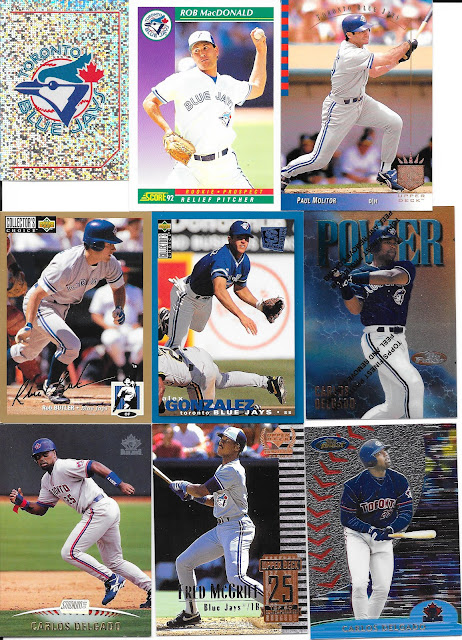 May have been a little sliding while trying to scan these, but a great variety here. Classic McGriff and some Delgado love.

Actually the Rob Butler was a parallel I didn't even know existed with the gold signature on the Collector's Choice. You see something new every day - love it. 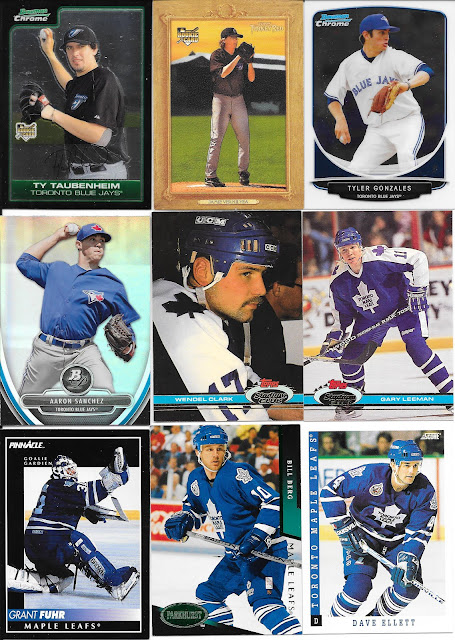 Turkey Red sighting! First one of those for my Jays collection. 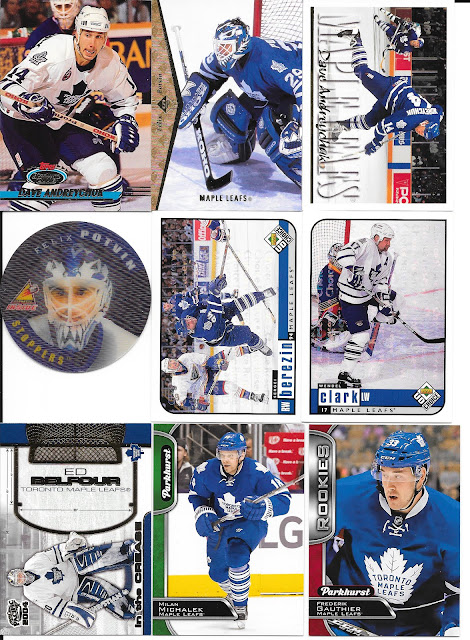 SOme nice additional Leaf parallels as well with Parkhurst at some hockey Collector's Choice representing. Not to mention, love the Pinnacle Inside insert of Potvin in 3D motion action. 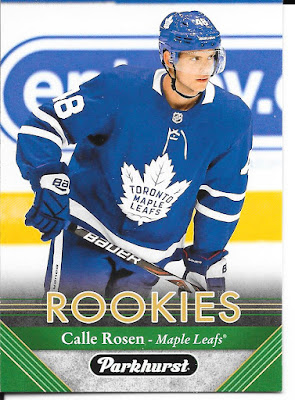 We finish with my first Leaf card from the 2017-18 Parkhurst set (which goes well with the couple a scan up from the year before).

Appreciate the cards and sending them along - all great additions to the collection.
Posted by CrazieJoe at 8:00 AM