Let's try this on a Dollarama 80 card pack

Today, the first half of an 80 card baseball repack from Dollarama which I have had from last year (not to worry - anything "bought" here, was bought before 2020 started, so I am still sticking to the "not buying new cards" thing this year). Also, will try to score this on the system I am using this year - though as a repack, and with my lower number of sets being collected, I expect the scores on these to take up the low end of the rankings come year end. 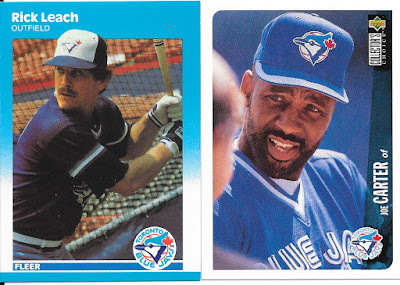 A solid enough half with two Jays which are not what I consider to be ones that show up every day in these repacks - called them second tier - a bit more unlikely to see, but neither is a new one for me. 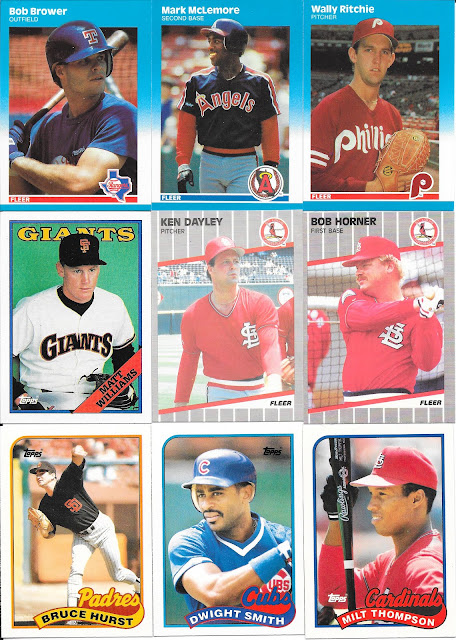 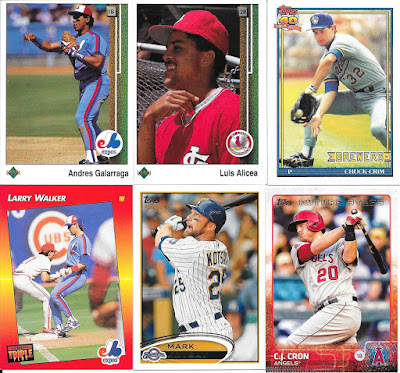 1988 Fleer Update, 1988 Topps, 1989 Fleer, 1989 Topps Traded, 1989 Upper Deck, and a couple other sets represented here. Sets on my slow to build and complete list. They include a couple expos, always nice to pick them up for someone else, but I need these ones unfortunately (sorry Mike!).

There were some dupes, and the last couple cards are already off to Mike from Not ANother Baseball Card Blog. 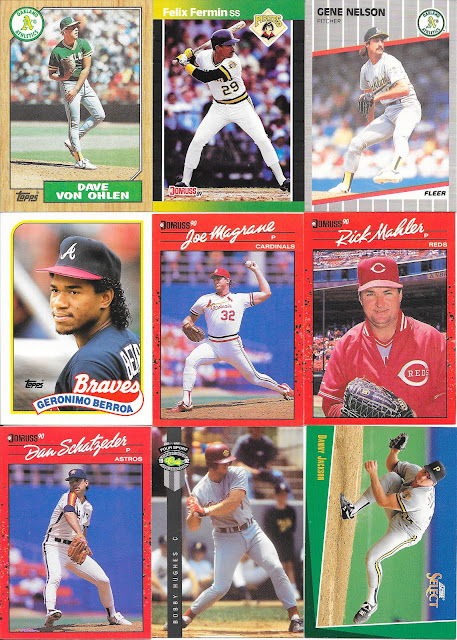 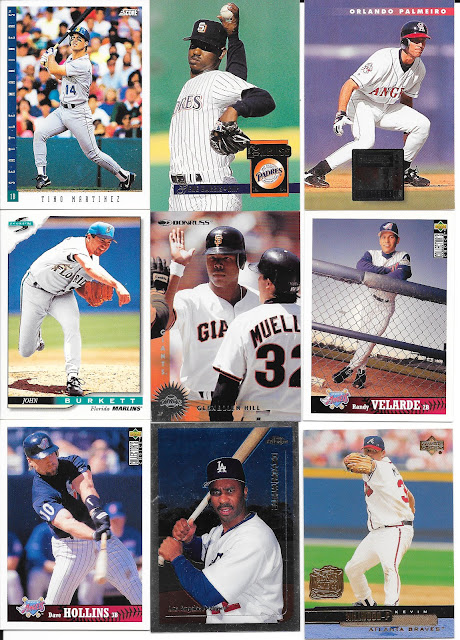 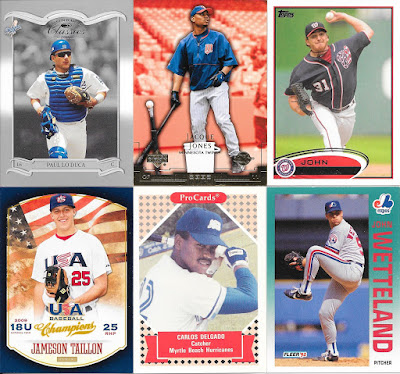 Those early 2000s Donruss Classic cards are pretty nice. I don't have any others, so not going to start a build on them, but they are nice. The Chrome Devon White isn't too bad either and a nice repack pick up - too bad it was past his Jays days, but can't win them all.

The minor league Delgado is a pretty nice find as well. Kind of offsets getting one of the USA Panini set cards - not a fan of those at all.

Half way through (well, 41 cards actually) and 99 points so far, but final tally will be after the second half tomorrow. The scoring, as a reminder...

Speaking of scoring - I scored a great package about a week ago which took me a while to get to, but want to share it now. What can I say...busy season is starting at work, things are a bit challenging with our son who has high anxiety issues, and well...it leaves a bit less time for getting some stuff posted and sorted.

Anyway, another great mailer from baseballcardstoreca on TCDB or also from https://baseballcardstore.ca/ - well worth checking out the website. Here I got some absolute beauties. 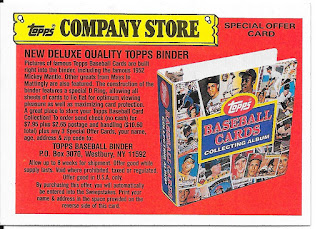 Yup - this card excited me. It is the last card from the 1989 Topps baseball insert set of ad cards. Not sure how many people really collected these at the time - I know as a kid I didn't, but they are really cool to look back at now. Seeing it now...actually wouldn't mind actually having that binder...wonder if it's too late to send in for... 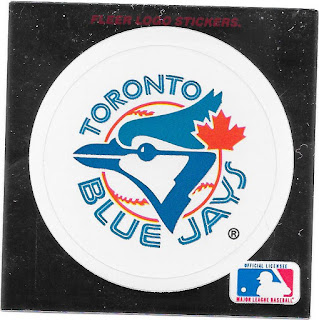 Here is the complete team set of 1991 Ultra team logo stickers. Yup, only one, but now I have it. 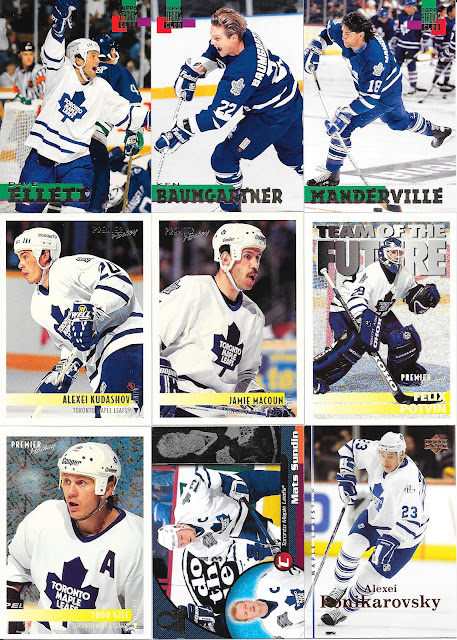 All new adds from early 90s Stadium Club and Topps Leafs including my first...sparkle I guess...parallel with Todd Gill. Surprised to see a few nice stickers as well.

Some smaller Blue Jays cards. Okay fine, the first two are Lloyd stickers from Topps out of 1982. Not only is my Eckstein square, but I got a small Dickey too!

Yeah, I am never too immature for innuendo, but hey - any new mini is a great mini for the Jays collection. For Gypsy Queen this is probably one of the designs I like more as well. 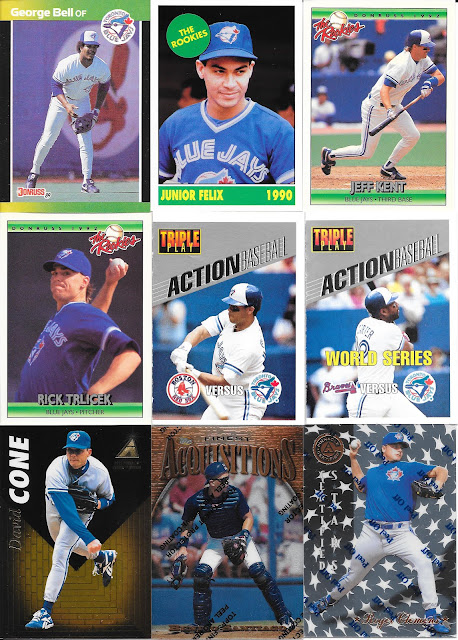 So much new - I love it. The Triple Play Action baseball game cards open up and are unscratched. A neat little game of scratch baseball.

David Cone Zenith - a short time Jay, and one I don't recall much of as a Jay, just like Roger Clemens.

The Pinnacle Mint Clemens by the way ended up with a slight ding on the corner. This package was travelling over the holidays and was well packaged, but I gather the holiday roughness just took it's tool. It very rarely happens with nicely packaged cards like this, but it can happen, even in a bubble mailer. Still super happy to have it regardless. 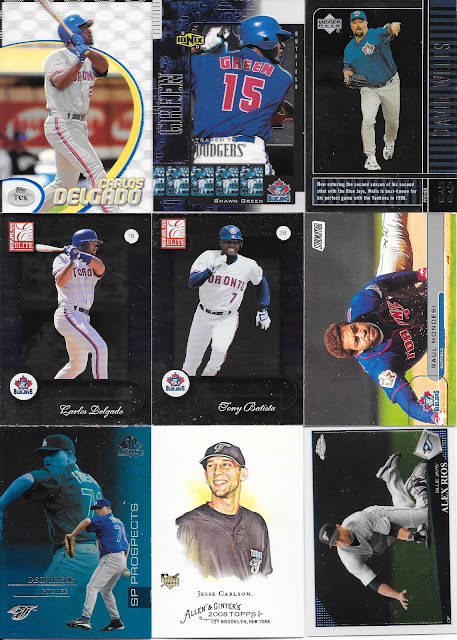 I really love acetate cards and the first here of Delgado is fabulous. A great shine that scans well, nice design on the transparent part...just marvelous.

For those wondering (as was asked with the cards) - I do collect Jays including those in a Jays unform but noting "traded" like Green here, but I will also include Jays in other uniforms that note they are traded to the Jays. Equal opportunity! 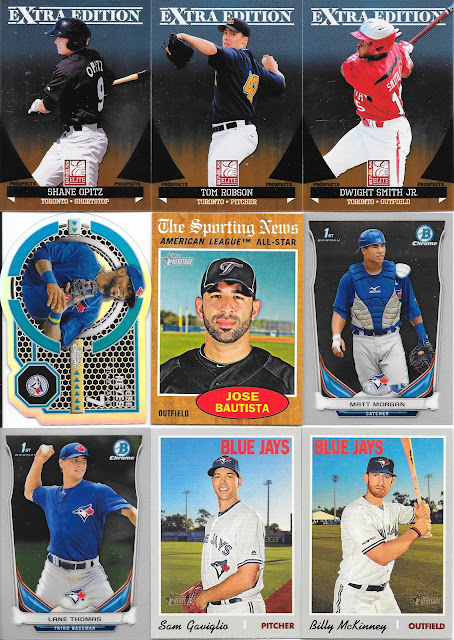 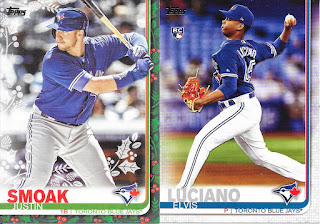 I don't generally collect minor league cards however, these Extra Edition cards do specify Toronto as the team for the prospects, so I will allow them. If these had the minor league team mentioned, they wouldn't be for me. That's my collecting line...gotta have one to define the collection.

The Die Cats Reyes is pretty neat as is the Heritage Bautista, but with the sweet design, the player hardly matters.

Surprised to see Matt Morgan...then I realized as much as this was a blue chip prospect, it's not wrestling's blueprint Matt Morgan...easily confused, I swear.

We end with some new Heritage and Topps which I sorely lack including a holiday Smoak!

Can't say enough for how each of these packages from baseballcardstoreca add so much to the diversity of my collection - very very much appreciated.
Posted by CrazieJoe at 8:00 AM