Finishing may be a lie - there might be another chunk of cards in the other box - I don't think there are any more telling by the card sides, at least for the first box. Time will tell, but anyway, yesterday we had Showdown cards through 2003, and today we have some 2004 and 2005! 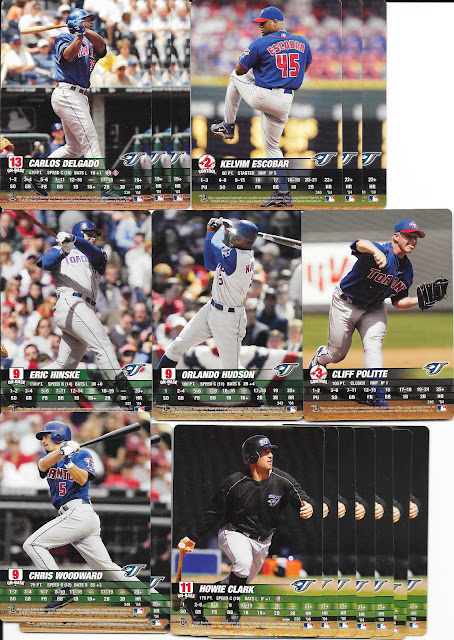 As you can see, these came in multiples in most cases, which isn't a bad thing at all. It would be nice to know enough about the game to try and compare stats and see if they make sense for the player, and in relation to each other - but a bit too much work involved there. 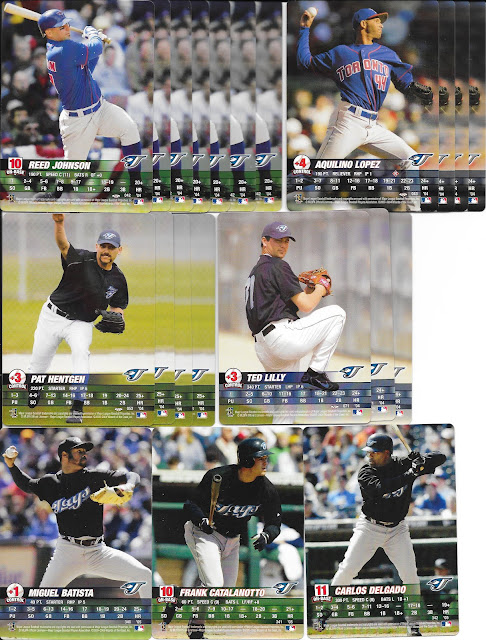 I will compare Carlos Delgado here to the one up above. Generally the stats are the same but the first is a 13 on base versus 11 here - so I can assume that means he is a bit lower (not as good) as the earlier set?

At least the stats give me something to look at besides the no so nice Jays team logos from these sets.

Nice...how many of a single card can you have in a deck as I wouldn't mind an all Roy Halladay starting rotation. Nothing wrong with that!

Quirky cards and complex-ish game, but the cards themselves are nice enough action photos, they might as well just be on baseball cards instead of game cards, so I can appreciate that, and that these boxes brought a whole bunch of Showdown I never even thought about, but am glad now to have.

One last note - a thank you in advance to baseballcardstoreca for another package of cards including a fer Bruins I will put aside for Jeff. Figure since he checks in on the blog, I want those to be a fun surprise when all is said and done, so won't share them here. Will share the Leafs and Jays set across, though may be a bit as work is really picking up...probably will enter to my collection now-ish, but share later in April as it gives me time to scan, and share easily at a time when easy helps with work being all consuming.
Posted by CrazieJoe at 8:00 AM