I don't collect football cards, but I like the look of this set. 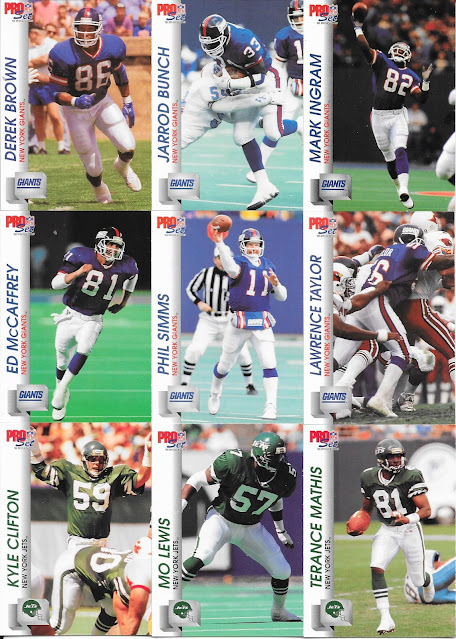 I had some of these cards come up in one of the earlier card lots I picked up, so seen a bit of the set, and it's a simple enough design but pretty darn nice. Decent photography, a design that doesn't take away from it on the front. The name on the side is easy to read and the cards are ordered together by team. Lots I like about the fronts. 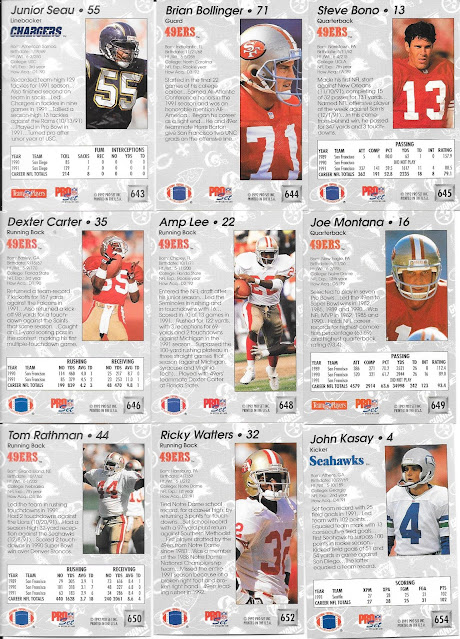 The backs are a little blah in the overall grey colouring, but otherwise, basic stats, good right up. I mean, other than the lack of year by year stats taking up a bit more space, pretty solid backs too.
I am just impressed there's a Joe Montana card here, would have thought those would be MIA. As a kid, he was "my guy" as any football I watched was the 49ers in the late 80s, then Buffalo in the painful early 90s...so close yet so far in those 4 runner up years. 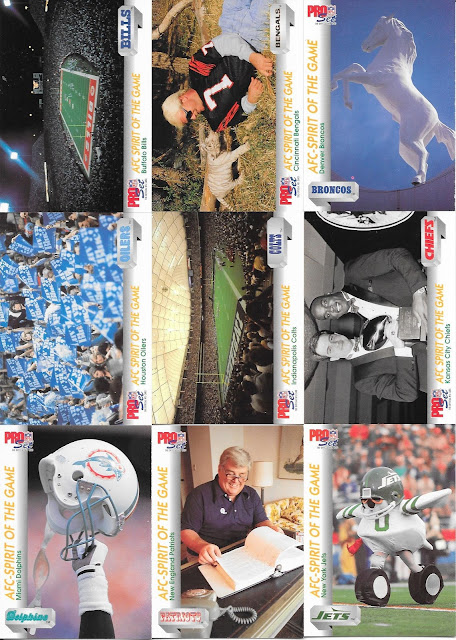 Nice subset cards too with these spirit of the game cards and even the backs... 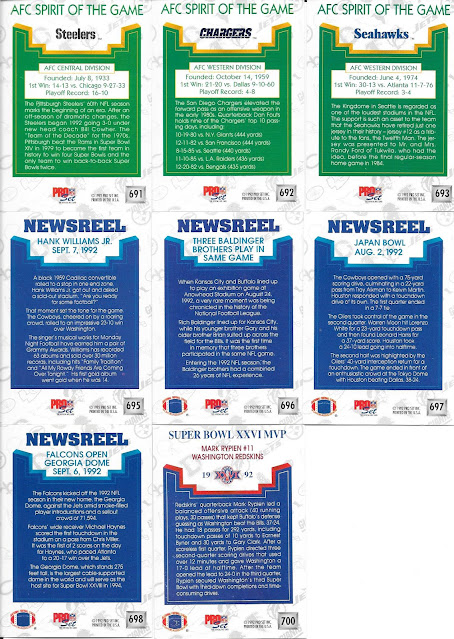 Are too shabby either.

Being Pro Set, the set size is also massive at 700 cards, so getting about 80 of them here is just a drop in the bucket. Might have to see how much shows up and whether I can trade away a decent started set. 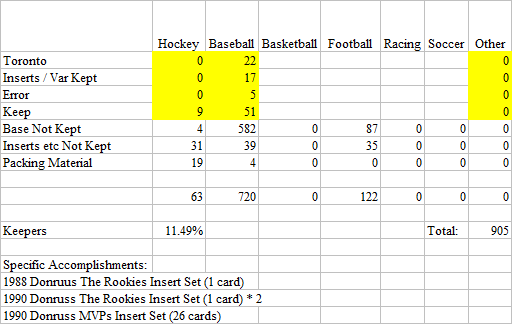 We end today with the last item which Oren sent my way... 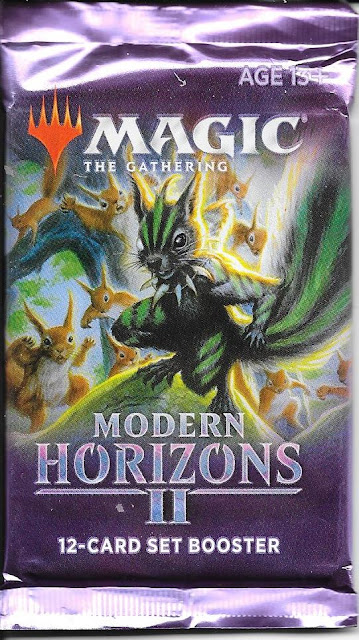 Definitely wasn't expecting this. As I do have an unopened pack in my collection, I felt I needed to open this anyway since it was an amazing gift to send my way - thank you Oren. I don't usually look up in advance for what the expensive cards of the day are, but I figured I would here, and specifically, what I would be looking for as far as artifact cards go, since that is what I collect.
There are a number of uncommon/common artifacts, a token or two, but as far as the "most expensive" artifact card currently in the set - that would be Sword of Heart and Home which is a mythic and running around $15 CDN right now, so that would be the homerun for me here.

Being a set booster, you get an art card - not too caring of those. A land, no biggie there, and a token, which counts to me as an artifact, so there's a small win right there with a food token. 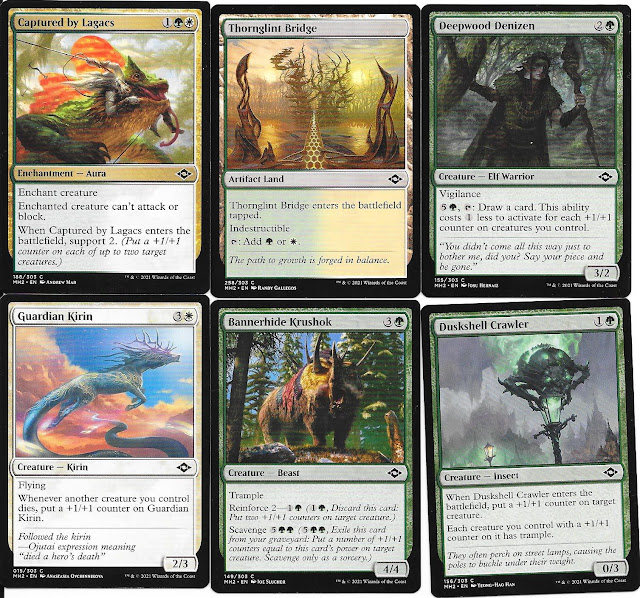 Into the commons which are very green heavy here, but nothing too extraordinary. 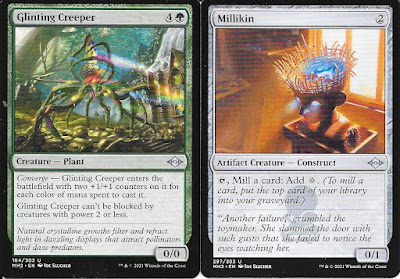 A second hit for me with another artifact card in the pack with Millikin. A useful effect for mana producing for an artifact deck especially, but not overly powerful. 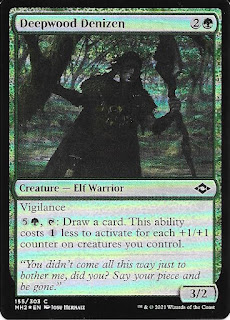 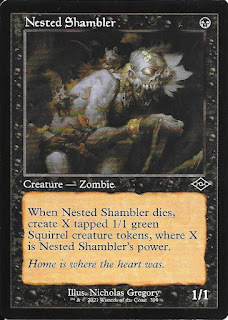 I appreciate the retro design and Magic using it to a limited extent - I think the Mystery Booster set really doing this to a large extent showed people liked the old designs, and gave Wizards enough feedback to keep it up. We end with the "rare" spot.... 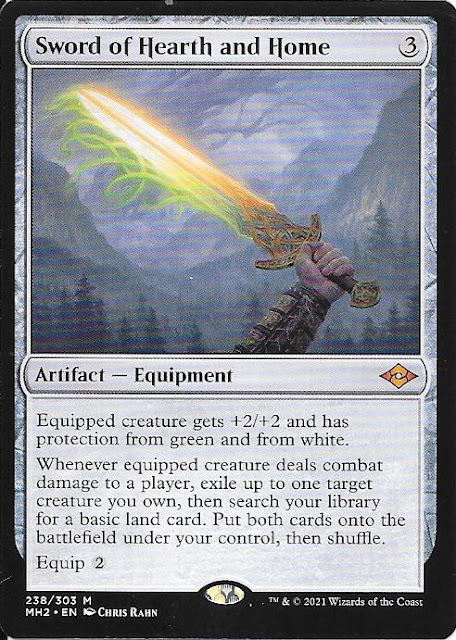 Looks like Oren has a horseshoe! Not only a mythic, instead of a rare, but the exact mythic I would have wanted. If you are wondering what the odds are, I looked them up, to get a specific mythic card, the odds are one in every 138 packs.
That is a fantastic way to end going through Oren's cards, which I am very grateful for and send many thanks, along with a package of cards in return, which by now, has started it's journey to you. My guess is it will take until end of next week to get to you...but hopefully sooner, and hopefully with some useful stuff for you.
Posted by CrazieJoe at 8:00 AM