May 21st - on a personal note, it's a wedding anniversary, though the kids still make celebrating and running off something we don't do still...maybe in a couple more years. Either way it's the 17th anniversary....wow, time flies!

I've been luck in some ways that a few of the sets covered here in the lot so far are some of the slow build sets I have on the backburner, so this is a great way to build those sets slowly. Today we cover another such set with 1992-93 O Pee Chee. 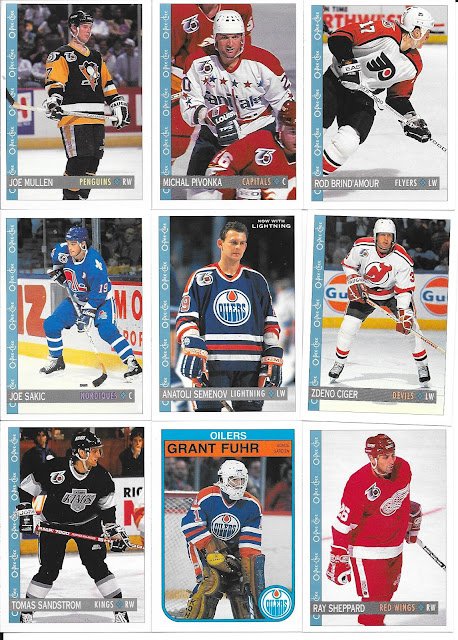 Not only do these cards bring me over 50% on the base set, we get to highlight one of the throwback design cards with the Fuhr card.
Funny enough, we have been talking about Grant recently in our house. My son (grade 6) was doing a project on famous Canadians, and his was Willie O'Ree. Willie was the first black NHL player when he joined the Bruins back in 1958. Was Willie a great player? Well - he was accomplished in playing professional hockey for about 20 years, so definitely had some skill to do it for that long, but didn't keep in the NHL too long, though long enough to break the colour barrier.
The Grant Fuhr talk came in because I mentioned him as a prime example of someone who may never have had the chance to play in the NHL if the colour barrier was never broken. A great hall of famer that may never have been. 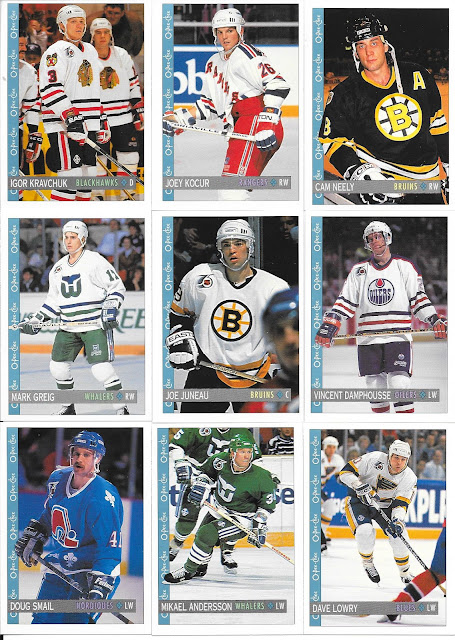 He isn't the only hall of famer here, but probably the most memorable to me - and not just for his Toronto stint. 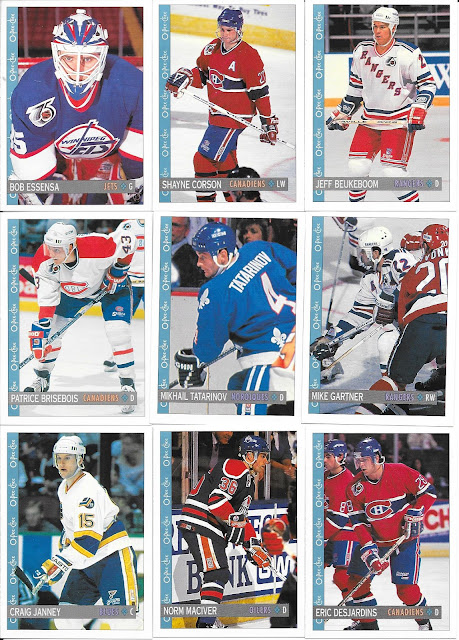 Below are what I thought were all the traders... 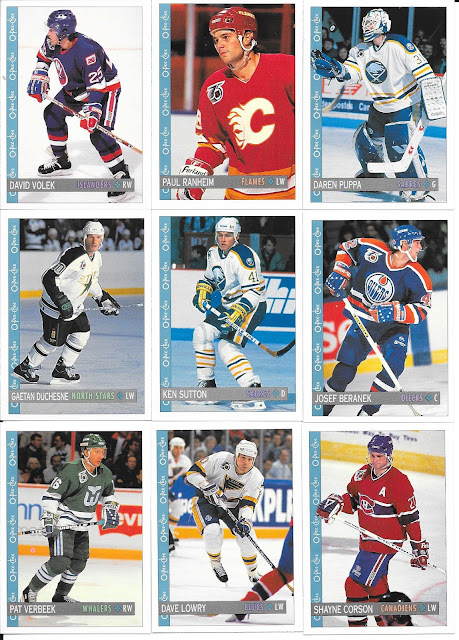 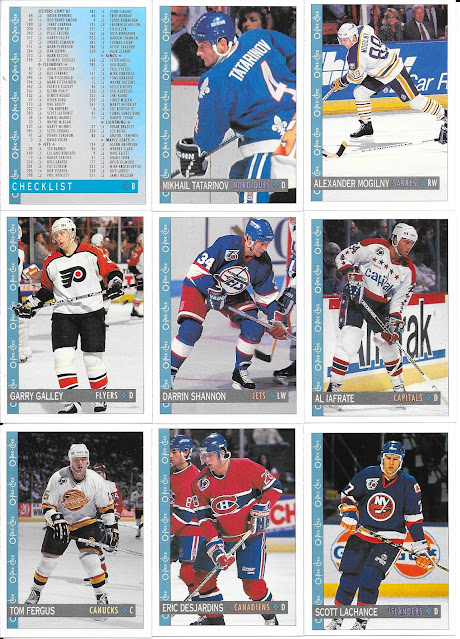 That checklist card though - technically a Toronto Maple Leaf card. I count checklists that are Toronto team listings as Toronto cards, whereas a normal checklist which may have a Leaf player, don't count to me. Do you draw a line on collecting or not collecting checklists? 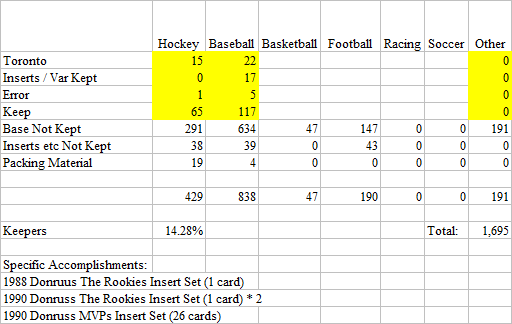 Another day, another team baggie from Swing and A Pop-Up - late 00s early 10s today. 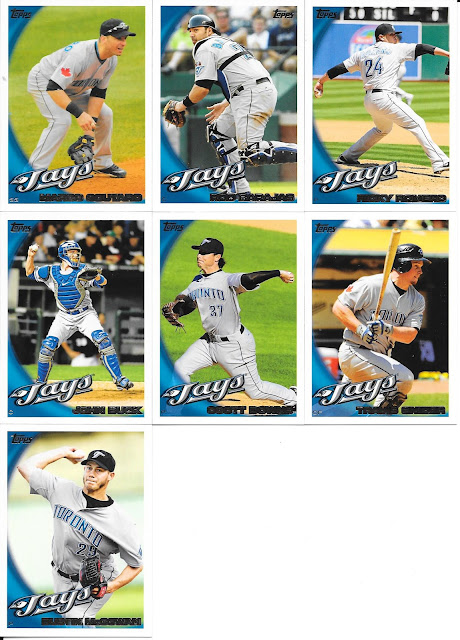 Completing a team set will always be a big win for going through new Jays cards. Here we have the rest of the 2010 Topps flagship set. This wasn't one of my favourite teams for the Jays, or favourite times, but there were still a couple solid guys on the team and some I personally liked like McGowan. 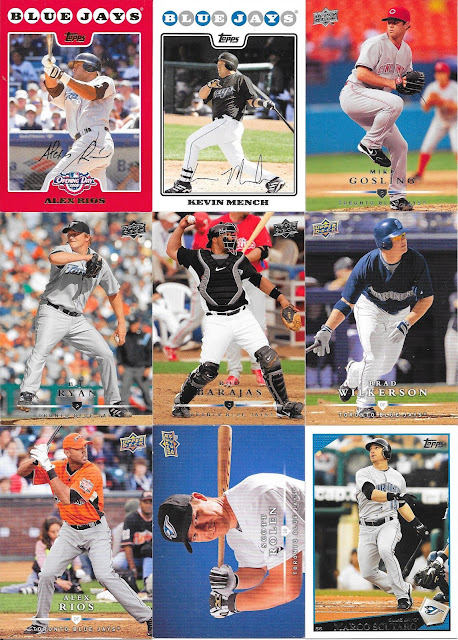 Some 2008 and 2009 Jays including the annoying "kinfa like our flagship set, but different enough to be it's own release" Opening Day Topps and First Edition Upper Deck. At least the 2008 Topps Opening Day with the red border is hard to miss. 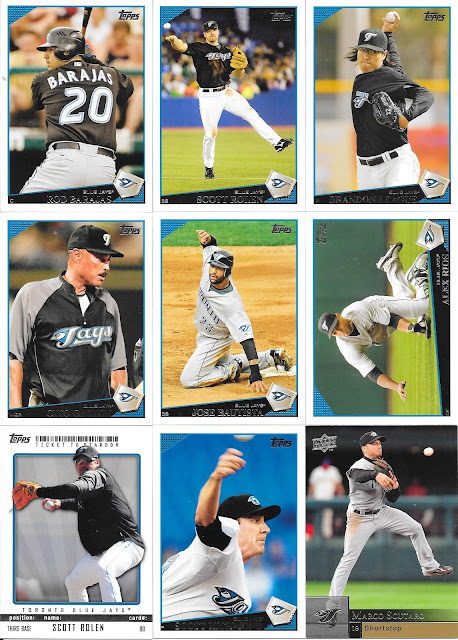 It was nice to see Cito back to manage the Jays for a bit. Whether it was the right call or not, always liked him as a manager.

We even see a J.P. rookie card, though I tend to think J.P. was a bit overrated and never lived up to being the Jay that he was expected to be. Still - happy to add the card to the collection!
Posted by CrazieJoe at 8:00 AM