A bit of writing to start today since I have a few minutes now to do so. During busy season, I had a couple different people reach out and offer open trades to me - they sent packages my way, in return I'd go through my stuffs and put something together to send back their way. I haven't had a chance with busy season to get into sharing those yet, but will start sprinkling those gifts through posts in May. First up will be some cards from reader Oren - you know who you are - who sent a number of baggies which I will share as they came, and as I get a chance to go through them, and then a similar bung from Swing And A Pop-Up which I will go through after those.

Might end today with starting on some of Oren's cards, but first another package as it were.

It took me a bit to get to this, and I thought after busy season would be a good time as I could spend some time actually putting together a bit more of a post each day, but today we get to start another lot.

This one was picked up for about $100 - assorted sports again, so all the major 4 and likely odds and sods of other stuff. Instead of just pulling a specific card number each day, I'll take a bit of a look each day for a theme - be it player, set, or maybe just a card or two if they are interesting enough. Also allows a bit of leeway, so if there are 500 1991 Fleer baseball cards, I may just highlight the keepers or cards of interest and leave it at that. All in, should be about 20,000 cards and my line is usually a penny a card - anything less than a penny a card, and having some signs of cards outside 1989-1992, worthwhile to me. No offence to the "junk" years, just not likely to be much there for me if it's all in the few year span.

Should be pretty good, and I'll nickname this one the COVID lot since that was when it was purchased late last year...though anything from the last couple years would be a COVID lot the way things have gone.

As I do, I will keep a running tally to see how good a lot this was, and no real rush for getting through the lot, so slow and steady and having fun. Especially after busy season, I like to slow down and enjoy time - with family, and with the hobby. 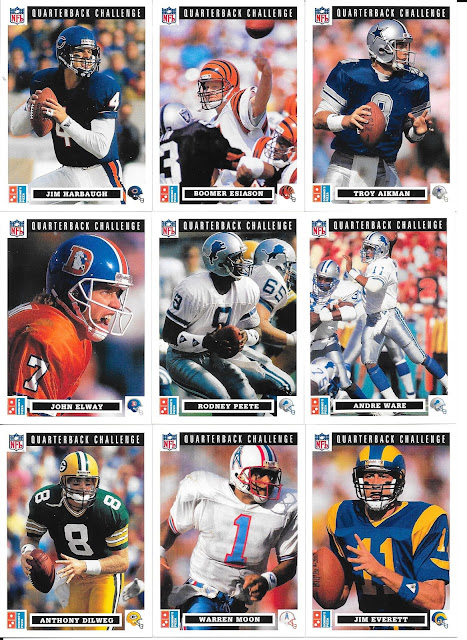 1991 Upper Deck Domino's The Quarterbacks. A very neat start. These cards were issued in 4 card packs with an NFL Kickoff deal which was 2 medium pizzas and 4 cans of coke. Had never see or heard of this set before, but not being big into football, that doesn't surprise me.
The set is a total of 50 cards, so given the pack size and size of the set, it's a manageable little set to collect. 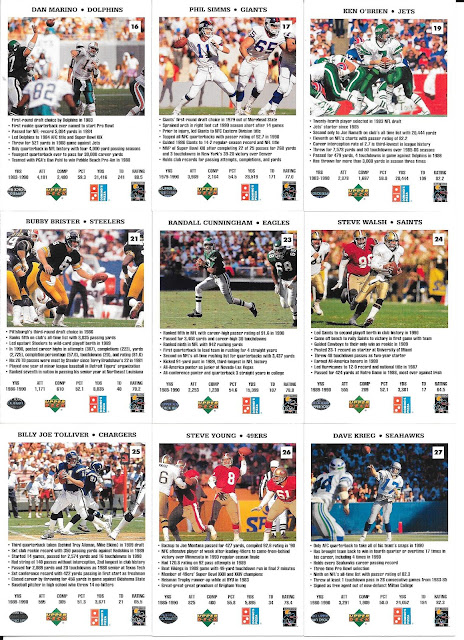 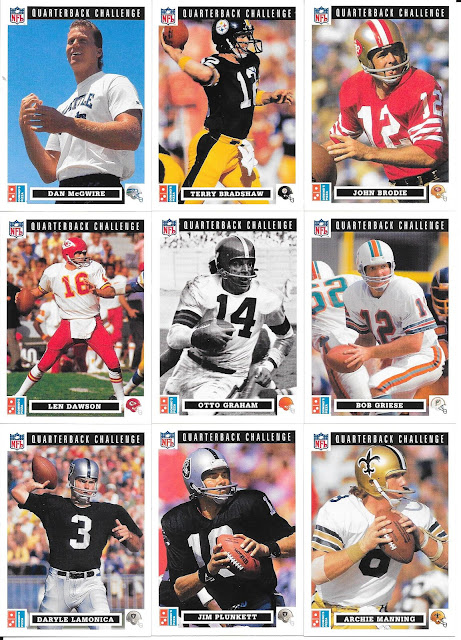 As you can see, it's not just current at the time quarterbacks, but you get some classic ones as well which is nice. 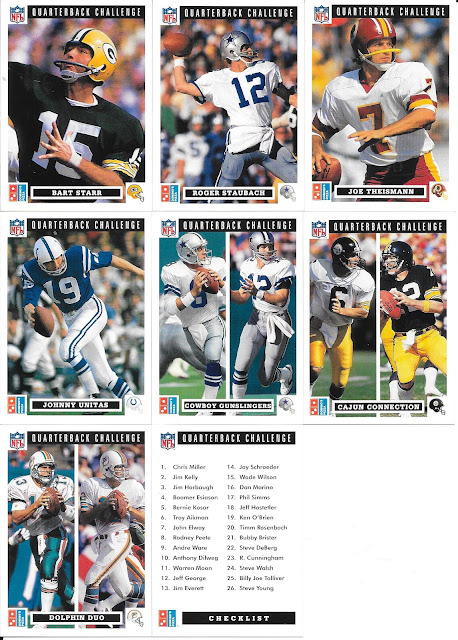 Only 50 cards, and they still snuck in a little subset of duos.

So looking at the checklist, at first I thought certain stars may have been pulled and this at one time was a complete set, but the missing players run the gambit of stars to, well, not. A neat start getting 35 of the 50 cards. Hopefully I can help someone else fill or complete their set if the are collecting.

Sure, no keepers on the first day - but I'm sure that will change!
I mean, having other things show up which are all keepers make up for it. I mean, let's look at the first cards from Oren... 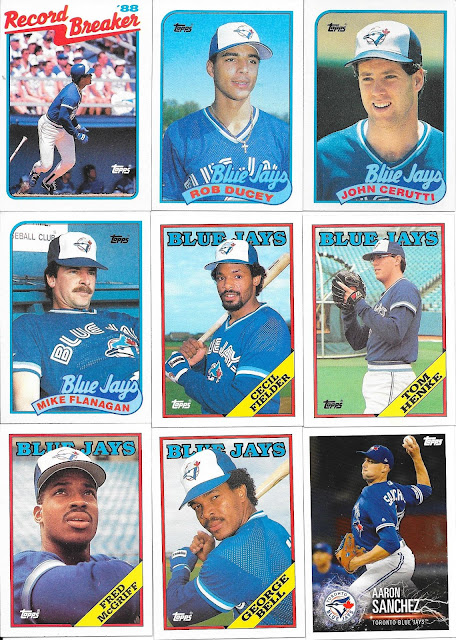 Do I have 1988 and 1989 Topps Blue Jays? Yep! Do I want more? Yep! Happy to have them. Always like seeing that Cecil Fielder card. Aaron is new though. 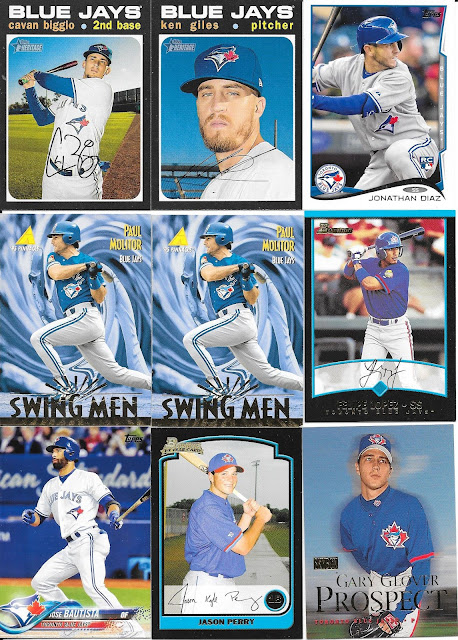 Don't even know where to start with these...Heritage is always nice, and generally lacking in my collection - Bowman I have never been a big fan of when looking at the 2000s onward, just way too prospect heavy, but I will absolutely collect my Jays. Bautista wins best card to me here - that "wave" design has grown on me, and the team was really good too. 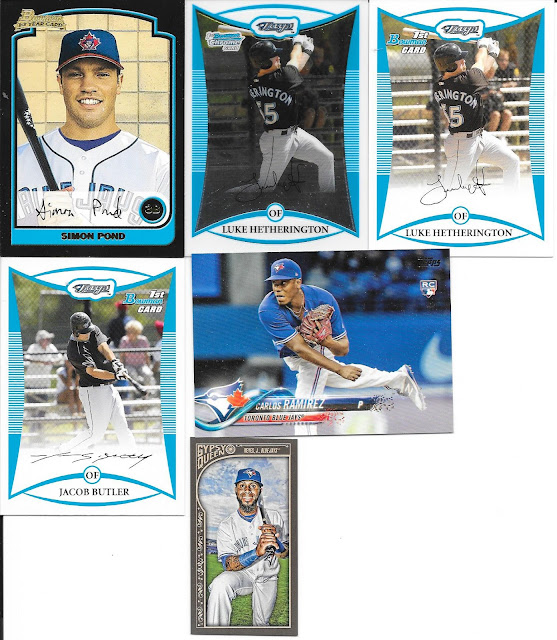 We end the first baggie with more Bowman prospects but that mini Reyes is awesome.
Thank you for the first bunch, but many more to come too!
Posted by CrazieJoe at 8:00 AM