Today from the COVID lot, we get another run of 1992 Pro Set football cards. 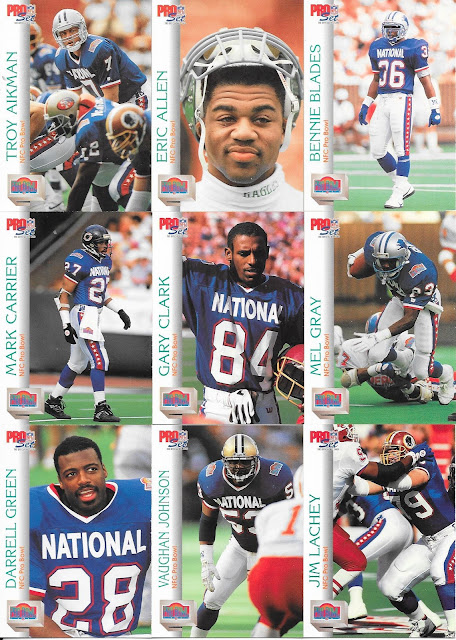 Well, definitely have the stars in still for the most part here. 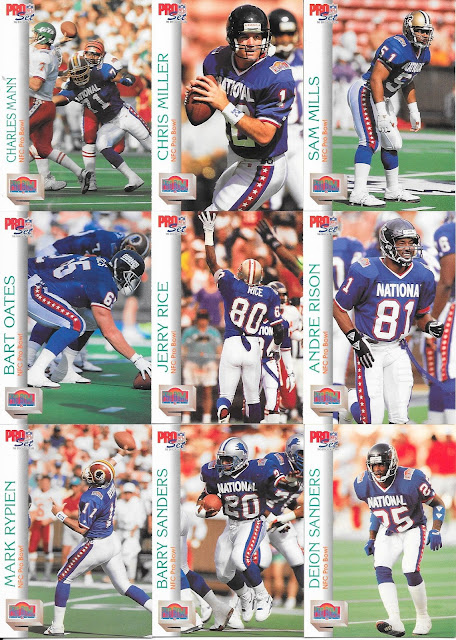 I really like the NFL all star uniforms being, you know, like an actual team - all the same and such. The helmet is the perfect touch for being team specific, allowing you to see the team while also recognizing the team each player is from without taking away from the team look.
No matter the sport - what uniforms were your favourite or least favourite from all star games? 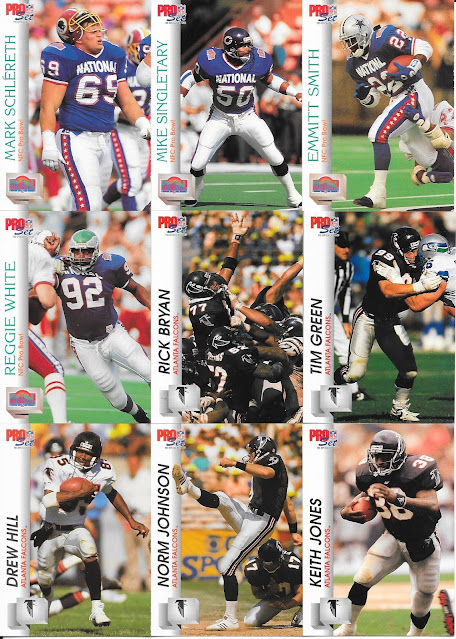 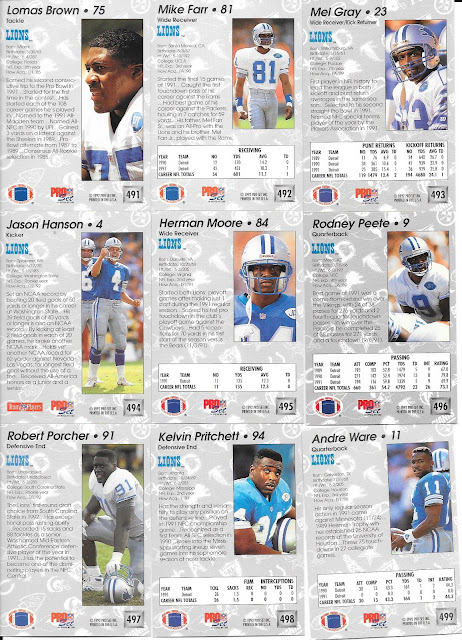 More backs to show so you get the full view. 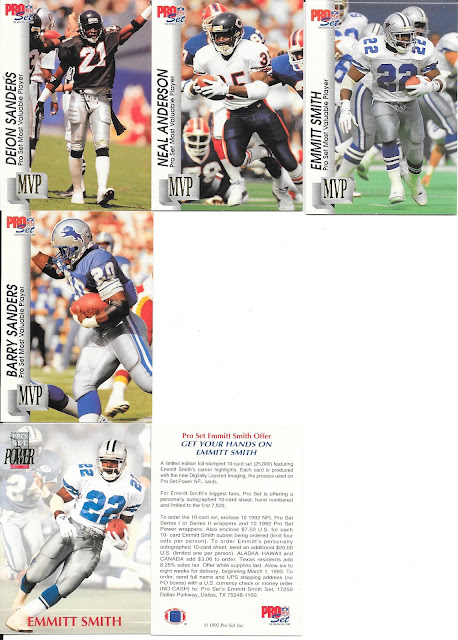 We then end with some inserts - the MVP ones, and the Emmitt Smith offer as well. Where the normal base cards have a nice natural and slight curve to them, the MVP inserts, probably due to their slight glossiness, have no curve at all. Always nice to see some inserts, and Neon Deion is solid as of course is Emmitt. 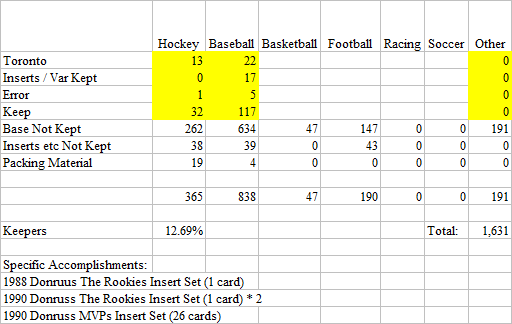 Can't just leave without adding some more shares from another baggie of cards passed over from Swing And A Pop Up. 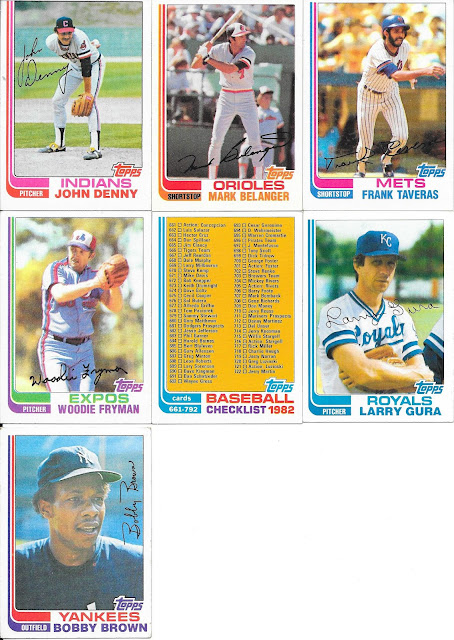 A dribble more of the 1982 Topps cards, checklist included. Then we get into the Jays content! 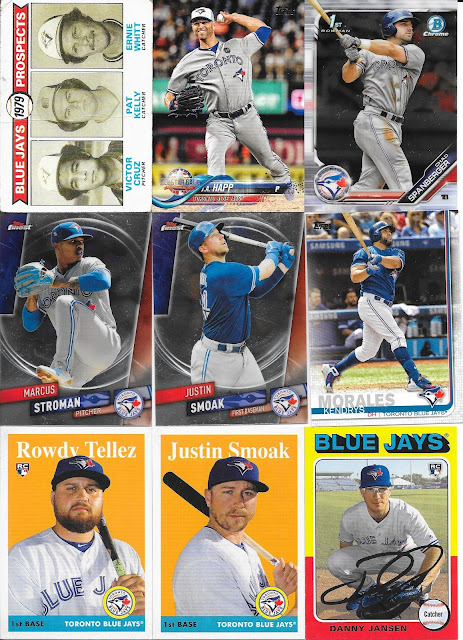 A nice vintage Jays card that I needed from the 1979 Topps set Ernie Whitt's my favourite of the three. We then skip ahead as the rest of the Jays today are just from the last few years. All still needs for my collection - no dupes.
Highlights here are sets I don't pick up myself or see much of except through trades with Finest and Archives. Archives really bothers me with the multiple border design base set, it just irritates me. It's a base set, sure there are subsets, but otherwise, give me a consistent border. 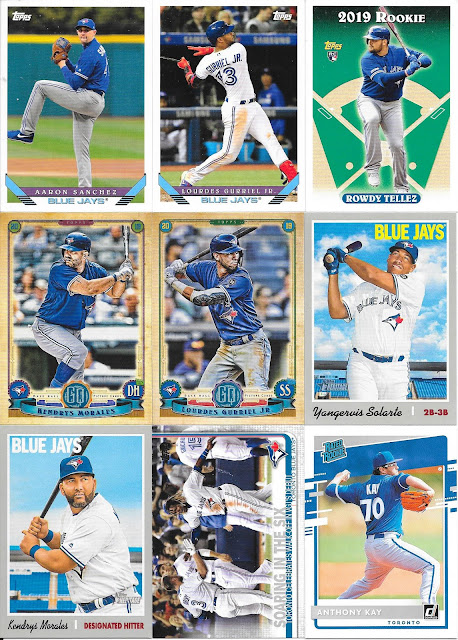 Also - early 90s designs being in Archives...again, just bother me as anything after the 80s just doesn't feel old enough for me to be used as a "vintage" or throwback" design - then again, I guess I am just getting old.
Gypsy Queen is another one. I don't think I ever bought anything from Gypsy Queen, and maybe only got a pack or two in the assorted pack boxes over the years.
I love the Vladdy Soaring In The Six card, and Donruss - the newer versions - are just forced and the designs don't feel "Donrussy" being on such different cardstock from the 80s and 90s. 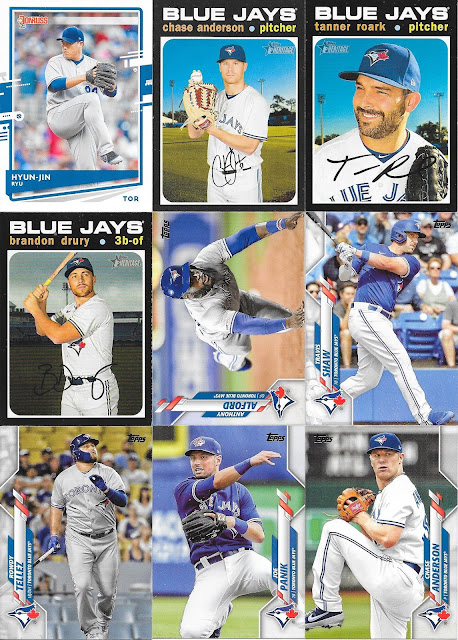 We end with some Heritage needs and a handful of 2020 Topps Update Jays which irritate me for having differently directed backs. I mean, I either get proper fronts in binder pages, or proper backs, but not both. Almost makes me want to get two copies of each so I can ensure the front and back are showing properly!
Posted by CrazieJoe at 8:00 AM