To PC or not to PC, for some, that is a question. For me - it's just a no. Doesn't mean I'm not interested in specific players, just not a way to collect that I care for. Today, the lot provides a few cards for a few different players which I expect were player collections for someone at some point, but for me, it's whether I have any set help or error cards that I can pull for myself.

Albert Belle was a really good hitter during his time in the bigs, which lasted 12 years. 1991 was his first full season, and by time he left Cleveland after 1996, he had 5 seasons in a row of 30+ homers and 100+ RBIs. Though he was all of Hall of Fame ballot for 2 appearances, garnering 7.7% the first year before falling off after the next, it's likely the length of his career and having to retire at 34 due to hip problems, that stopped him from getting in. If his numbers held for another 4-5 years, he should have been able to get to 500 career homers which is a decent measure for getting in. 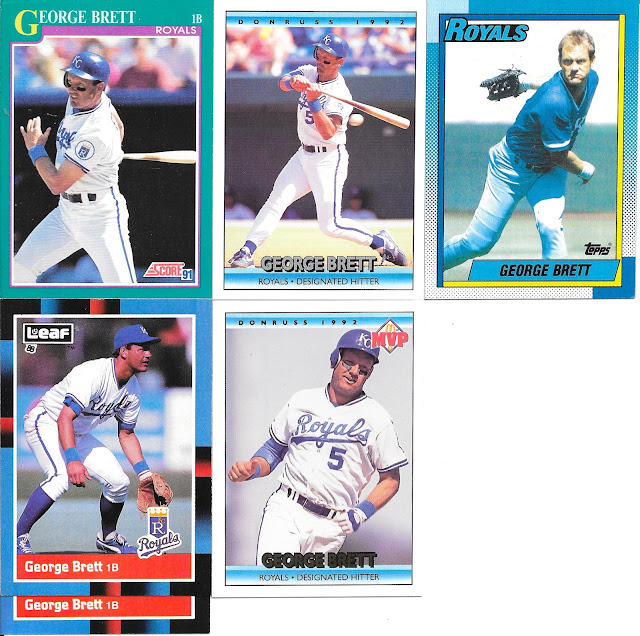 First ballot Hall of Famer who spent his entire career from 1973-1993 with Kansas City, Brett was synonymous with the team. That said, it's the pine tar incident on July 24, 1983 that many remember if picking one moment of his career. I was 3 at the time, so don't remember seeing it then, but the story lasted and highlights shown many times afterwards, that I remember it clearly from those. 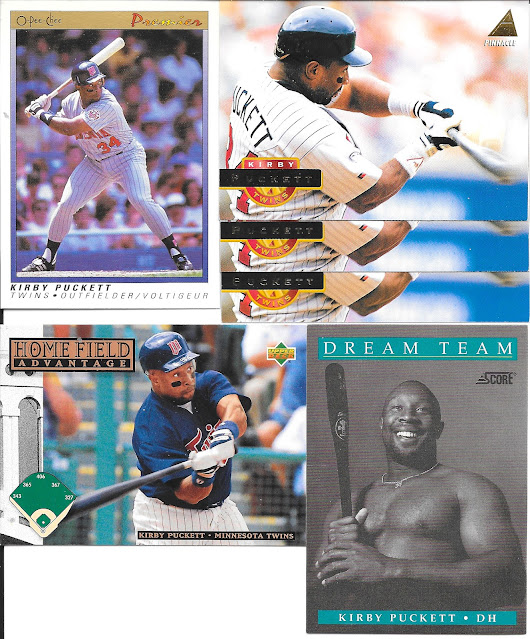 A sad story for a great man - Kirby was another first ballot Hall of Famer. He, like George, spent his entire career with one team - the Twins of course, but his career was a shorter 12 years because of a vision problem that saw him lose sight in one eye forcing an early retirement.
Happily, he was inducted 5 years later, but sadly, he passed away at the age of 45. Showing the impact he had on people - his friendship with David Ortiz, who started his career in Minnesota, was enough impact for young Ortiz, that Ortiz wore number 34 in Boston in honour of that impact and friendship. 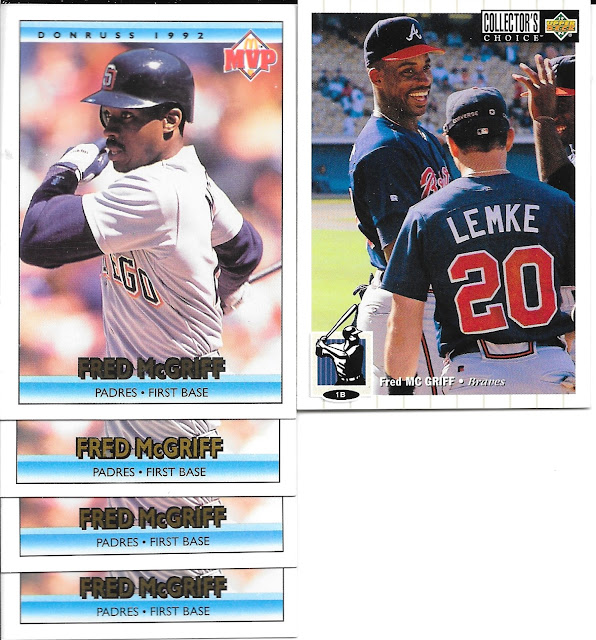 A solid career which started with the Jays, Fred had a great career that ended up short of the Hall of Fame - his best year being his last when he had about 40% of the votes to get in. Crime Dog was one of the most important trades in Toronto Blue Jay history - meaning, it was getting rid of him in exchange for Roberto Alomar and Joe Carter in 1990 which propelled the Jays to their back to back World Series victories. Tony Fernandez went with Fred to San Diego in that trade...but Tony found his way back...twice! 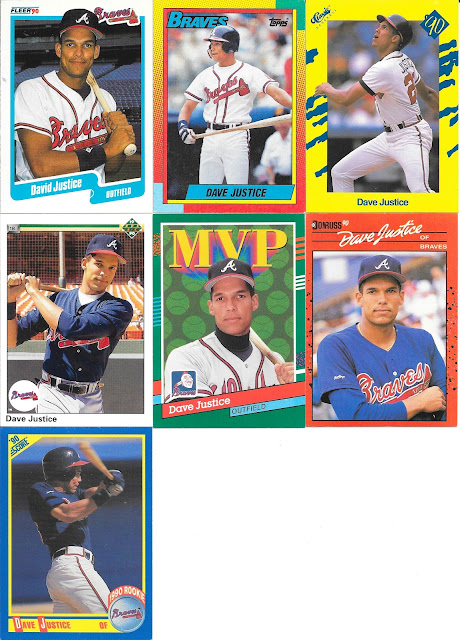 Team bias - I never liked Justice, even with the great name. He was an Atlanta Brave when they were a despised enemy of the Jays in the early 90s. Never did come around on him, and though again, he had a great career, it wasn't quite there to get him into the Hall as he didn't last past his first ballot. He was definitely a highly touted rookie though, and one of the first from my time collecting as a kid that I really remember being a bigger deal.
So, as cool as it is going through this - much help for my collection? Not really - one set card keeper and 3 uncorrected error cards 0 but it's fun to reminisce about the players regardless. 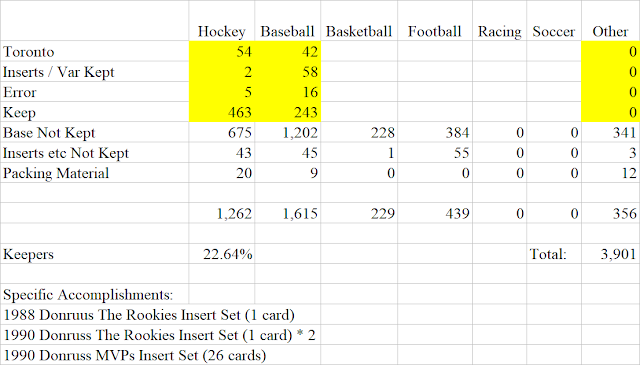 We end today with a PWE trade with first time trade partner on TCDB, davschw13 who sent me a bit of everything. 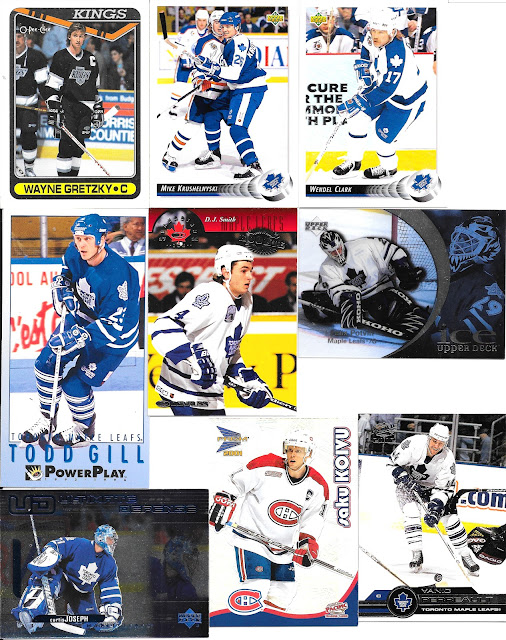 Wayne, I needed as I have the 1990-91 O Pee Chee set, but wanted another copy for the error binder as it is a UER card. Leafs of course, being Leafs for the Toronto collection, and yes, I even received a Montreal card as I wind down on my needs for the 2000-2001 Mc Donald's set. 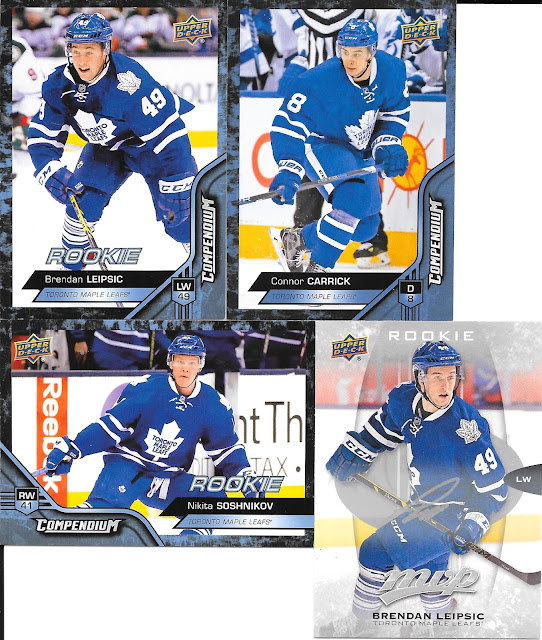 I had not heard of Compendium and had not seen any of these 2016-17 cards before receiving my first 3 here. The design is different, but I kind of like it. The silver scrip MVP is pretty nice too.
A great bunch of hockey cards, and nice little trade which I receive with many thanks!
Posted by CrazieJoe at 8:00 AM