I was originally thinking that I would be able to share each of the wrestling packs I bought as a separate post as they were 15 card "packs", however, the cards were sent as one "bunch", and as you will see, almost all are coming from a single set, so I figured, one post made the most sense.

Don't get me wrong, the "one set" works out for me as it is one I don't see getting otherwise, but one set nonetheless.

I'll share all the new cards (there were some dupes, but won't bother scanning those). 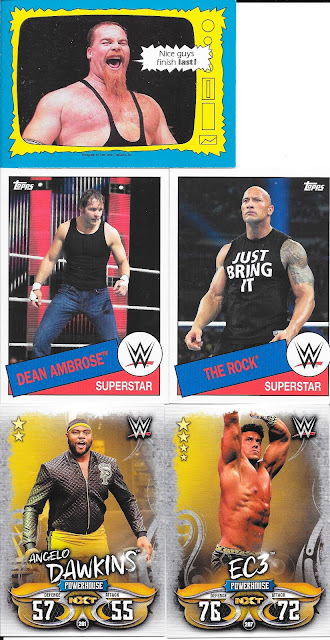 Would have loved to see more 1980s cards - but just the one addition. Also, nice to get a couple more Heritage set cards, as I do have a bunch from the set. As for the last two - Slam Attax game cards - I really actually like the front of these as full pose photos of the wrestlers, and don't see these around, so glad to get them.

So, pretty happy with the rest then as well  which are all from the Slam Attax 10th Edition. 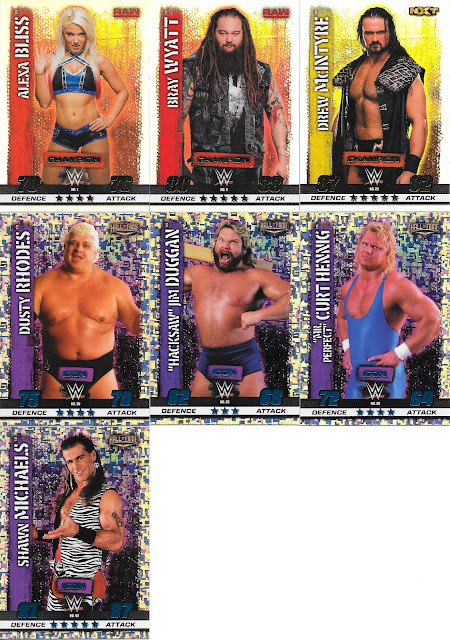 The first bunch of cards are foil cards and I believe fell one per pack. The first three don't really appear foil in the scans, but trust me, they are.

It is interesting looking at the scores and how they look compared to others who wrestled at different times (Dusty being similar to Mr. Perfect for example). 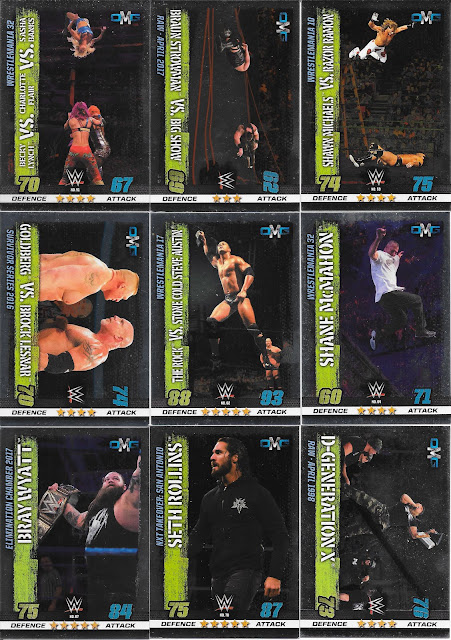 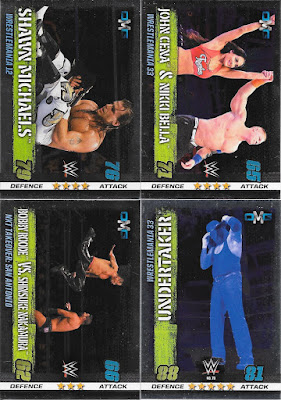 The next bunch of cards are foil OMG cards. I like these for trying to recall exactly when each of these moments happened. Some are easier than others to place, but a fun game, so I don't want to spoil them for anyone interested. 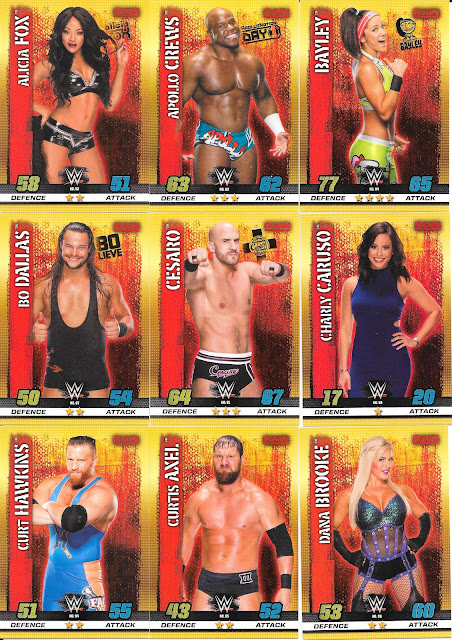 I find it funny that Curt Hawkins, who I believe was in the middle of his massive losing streak when these were done, still has higher ratings than Curtis Axel.

Also nice to see some love for commentators and backstage interviewers like Charly. 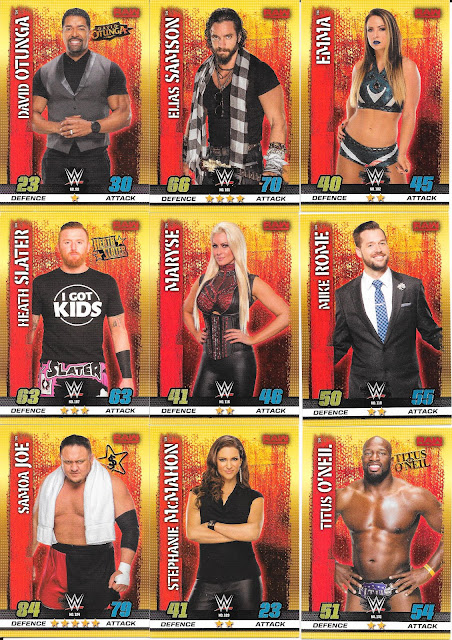 I can't believe I am saying this, but would have ranked Stephanie's attack skill higher when comparing to Emma and Maryse. Not sure why it is so low, especially just considering the power of her slap - she has a good one. 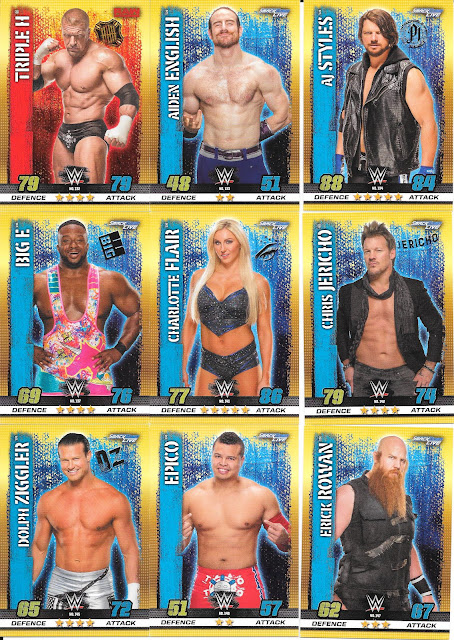 They should have also included items related to superstars as their own cards like AJ's soccer mom hair, Jericho's scarf or list, Triple H's sledgehammer. 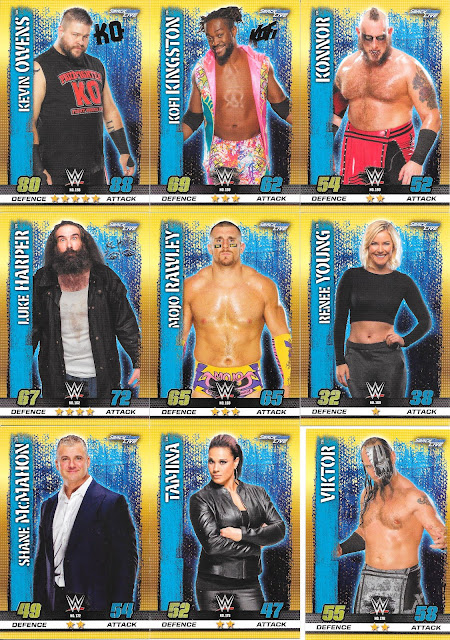 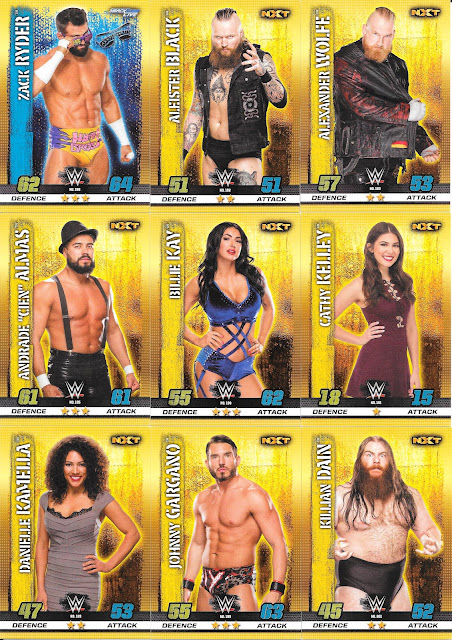 NXT was stacked at this point - Black, Almas, Gargano, Dain... 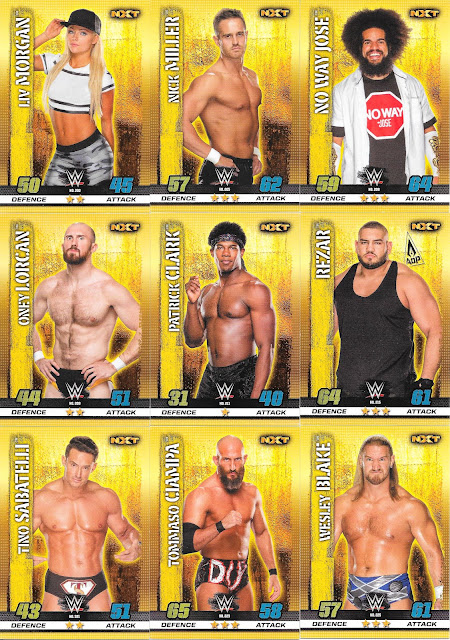 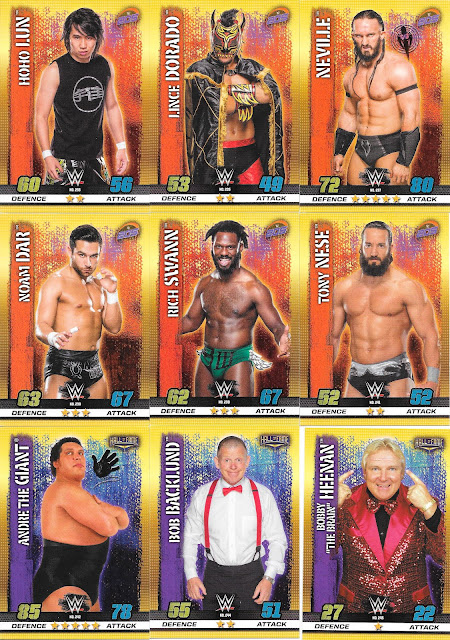 I don't watch very much of 205 to be honest as I don't have enough time to watch everything, but I do keep an eye on results and those on it. 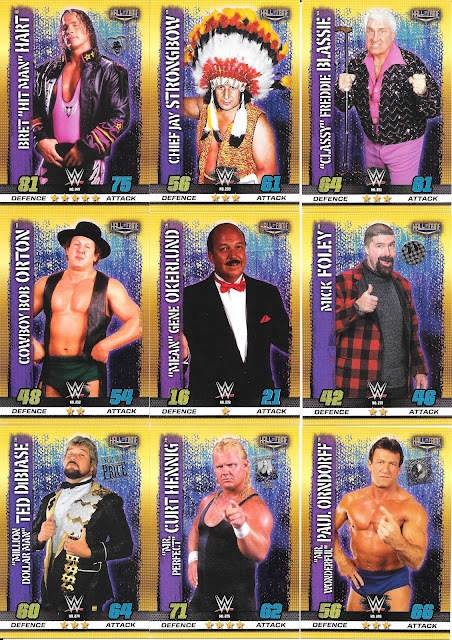 Love the inclusion of some Hall of Famer and Legends. I am curious on the difference in scoring between cards - see Mr. Perfect. I gather just a reflection of the time of career being considered, but interesting. 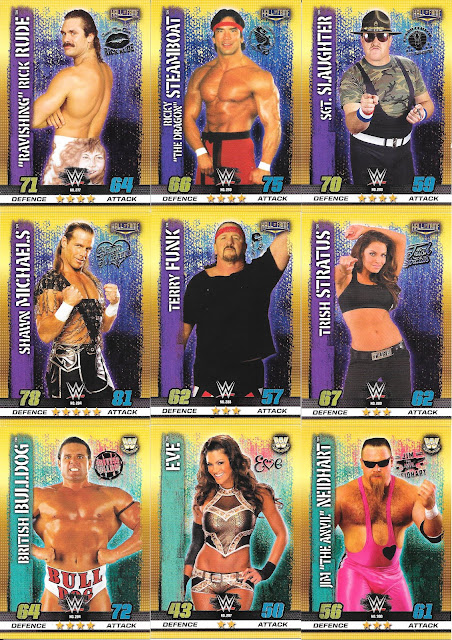 Always loved Trish - even more so with the natural hair colour. 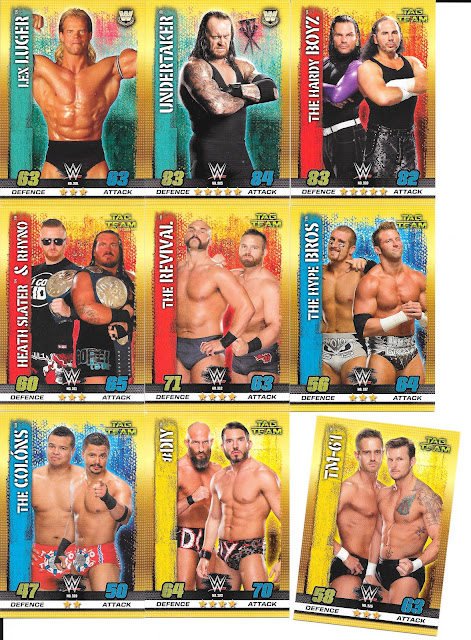 Tag teams get cards too - even when TM-61 is trying to get away from #DIY before they exploded. 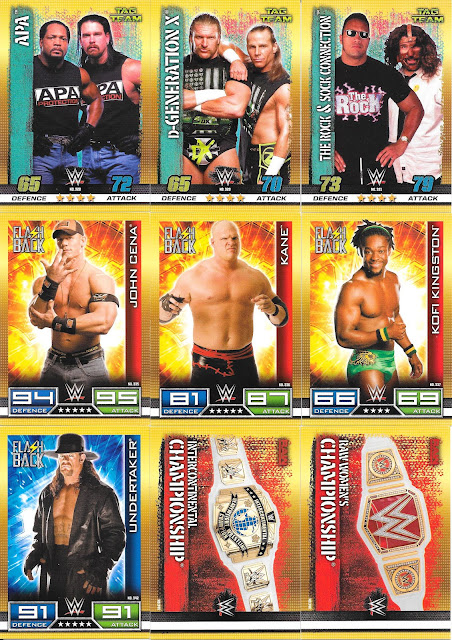 No. In no world can I consider that APA should be marked higher than DX. The retro cards are pretty nice though, even if Kofi is pretty weak (though to be honest, considering early in his career, he should be). 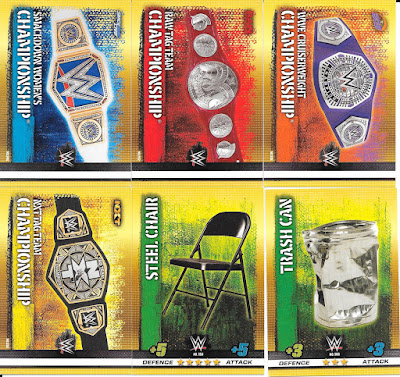 At the end of the set, a bunch of belts and some add ons like a steel chair or trasj can. Table is also there, but I don't have one of those cards (yet).

Definitely happy with the cards though a bit disappointed in the fact there wasn't a ton of variety in sets covered, but I will get over that.

Up next, a few days of going over the bunch of Leaf cards I also received which will be the last bit of the package from Firstrow.ca.
Posted by CrazieJoe at 8:00 AM