What's in a number

People tend to get their ID for TCDB from something - be it just their name, nickname, or otherwise something that is important to them. I can honestly say, I can't tell what the significance is for 860502, but I am glad that we were able to do a trade because it brought me some parallel cards.

I am finding, not surprisingly, that base cards are just slightly less easy for people to match up on, which is fine, and I am more than happy to give more than I am getting, especially if I will be getting a parallel or insert Blue Jay or Maple Leaf card. I don't care much for being fair in value (within reason) if it means getting something for my collection and giving up something I wanted to get rid of anyway.

Again, this was a great trade for getting rid of some basketball and football in order to get some cards that will actually be in my collection. 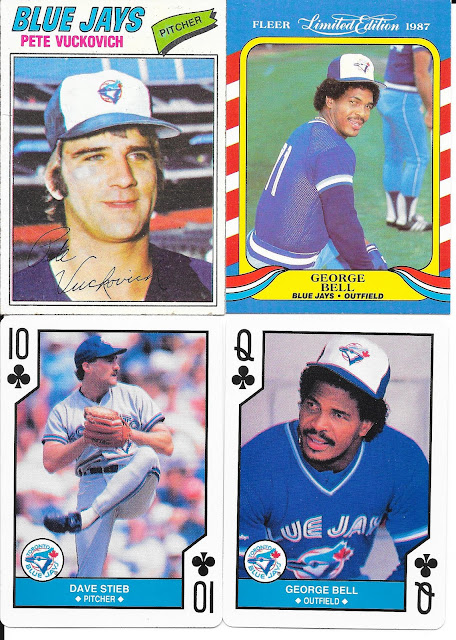 These are the older cards of the package.

I should really have all of the first year Jays cards by now. I haven't made it a focus and am still missing some because of it. The good part is, it's not like I collect for a team that has been around over 100 years, so I don't have to worry about spending big bucks getting early cards for the franchise. Heck, with the lack of inserts in pre-90s cards, I may very well be able to collect all Blue Jays cards issued from inception to the late 80s, but I digress.

The playing cards I can't say I will ever specifically collect, but I would count them if I get them and treat them like other Blue Jays cards. It just feels odd without stats, etc, but at least the name across the bottom is nice. 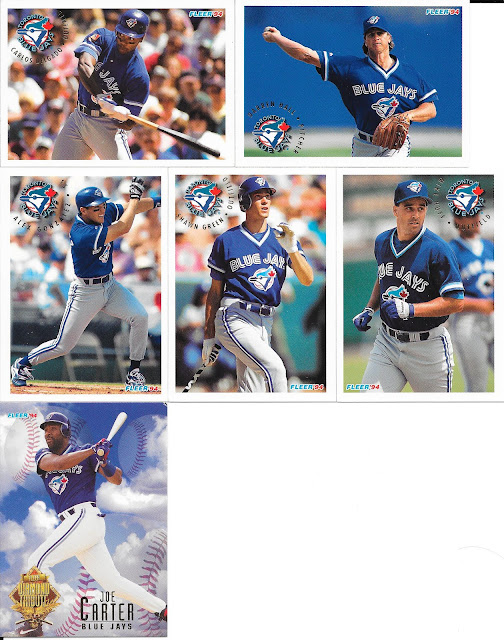 1994 Fleer always had a bit of an early 90s Upper Deck feel for it. Might be the borders on the front or look, not sure. this is the end of my collecting period as a child, so I don't have much 1994 anyway so nice to get these, and the Joe Carter inset is pretty nice, even with the sky background. 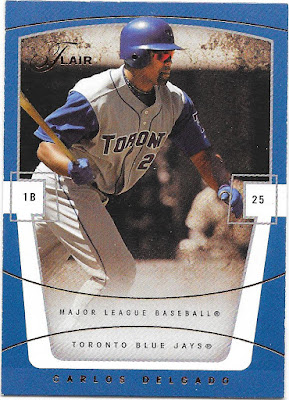 I like most Flair sets. They seem to try and keep a clean design with a flashback feel to earlier times. Here with the background (maybe sepia...) which helps Delgado stand out. This card out of 2004 nearing the end of Delgado's run with the Jays. The way he performed after leaving, he could have had a few more good years in Toronto, but I think the change was needed.

I am a bit surprised he didn't at least stick around the Hall of Fame ballot beyond the first year he was there. I don't think he should have made the Hall, but a bit more love....hat I expected. 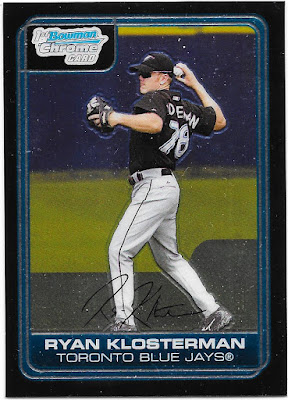 Unfortunately classic Bowman....MLB career stats - not a single major league game played, though about 7 seasons in the minors. 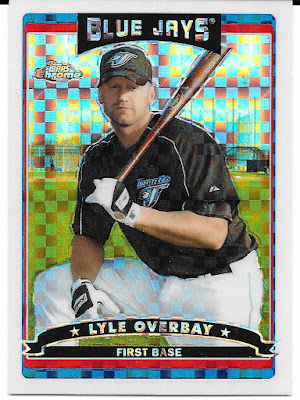 The best part of newer cards for collectors with not so great eye-sight? Sets like this that have a line on the back under the card number which says "Xfractor". On this one, I could probably get it right, but for sets with say, a gold and metal version that look very similar....this kind of thing is awesomely helpful! 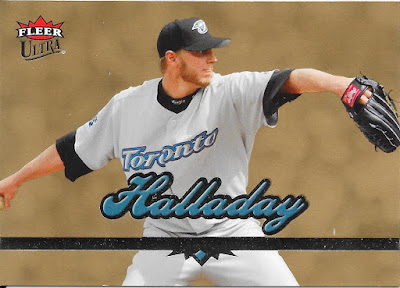 Have seen lots of these in hockey, but not many personally in baseball.

Another good package of cards which again, thank you 860502 for the great trade!

On a non-card note - with NHL opening night last night, yes the Leafs won, but it was not pretty. It'll take the team some time to gel, and good teams do find a way to win even when they shouldn't...hopefully that is what it is....but we will have to wait and see! Either way - they beat Montreal, so that's good regardless.
Posted by CrazieJoe at 8:00 AM